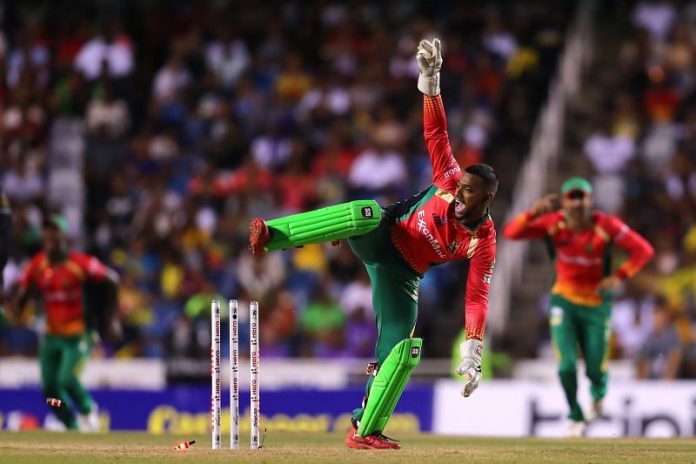 GUY vs SLK Dream11 Prediction: The last time these two teams faced each other we witnessed a completely one-sided match. While chasing, Guyana Amazon Warriors had a batting collapse, and they were all out for just 98 runs. Both teams are in a similar position right now, and they have a good chance to make it to the semi-finals.

Guyana Amazon Warriors are coming out of a loss in their last match, which they would have expected to win. Their performance has been decent so far, but there is still a lot of scope for improvement. They are in the middle stages of the points table but still have a chance to go higher. They would want to win this match after a loss in the last match.

St. Lucia Kings are in a very comfortable position right now, they have played 6 games and won 4 out of them. They have performed well and most of the players are contributing towards teams victories. They would want to keep this momentum going and win more matches.

Nicholas Pooran- Pooran is Guyana’s captain and has performed well in this season. He still has to be more consistent with his scoring so that their batting can become a little stronger. He is a quality striker and will have a big role in his team’s success.

Andre Fletcher- Fletcher is a player who can play smart cricket, but has not given match-winning performances so far. He gets good starts but is not able to convert them into big scores.

Faf du Plessis- Du Plessis is one of the most effective players, whichever team he plays for, he gives it his all. He did not get runs in his first few matches but got a century in his last game. He has regained his form and would look to keep it intact.

Tim David- Tim David played some match-winning knocks at the start of the season, but his form has slow fizzled out. If he gets back his touch, he should be able to play a lot better and win more matches.

Shimron Hetmyer- Hetmyer is a brilliant striker of the ball, and he has made some contributions to his team’s victories. These playing conditions are made for him. If he gets going the opposition will be in a lot of trouble.

Chandrapaul Hemraj- Hemraj is in a great form. He is Guyana’s highest run-scorer, and he also got a century in one of the matches. He did not do well in the last game, but he would not focus on that and try to do better in the next one.

Roston Chase- Chase is in incredible form. He is not just St. Lucia’s highest-scorer, but also CPL 2021’s highest run-scorer so far. This performance coming from a lower middle-order batsman makes it even more special. Hopefully, he can continue the way he has already.

Mohammad Hafeez- Hafeez is a very flexible player, he can bat at any position, but his performance in the middle order becomes very crucial to finish games. Plus his spin is an added advantage.

Alzari Joseph- Joseph always lets the ball do the talking for him, but this time he has been a little quiet. He has a good opportunity to pick wickets in this tournament to make a spot for himself in the T20 World Cup.

Romario Shepherd- He has been the star performer for Guyana this season. He has taken wickets in every match with consistency and is the second-highest wicket-taker till now. He is also not giving too many runs. His economy is just 6.2 runs per over.

Imran Tahir- At the age of 40, Tahir is still at the top of his game and is still getting results. He has picked up 10 wickets so far and is among the leading wicket-takers. He is also very economical by conceding just over 6.1 runs per over.

KreedOn Network
We are a team of sports writers who research about sports in India day in day out. Please reach out to us in case of any specific requirement of digital services on contact@kreedon.com .
Previous articleKnow Why Supreme Court Rejected the PIL Seeking Better Sports Policies ?
Next articleSAI Recruitment 2021: 100 Vacancies Up For Coaches. Apply Today