Wrestling is a physical combat sport played on an octagonal mat with a circle inside it. The sport has elements of sambo, judo, traditional wrestling and other such combat sports. The 2 types of wrestling held in the Olympics are Greco-Roman Wrestling and Freestyle Wrestling. We will be discussing Freestyle wrestling rules in this article. Athletes can grab opponents below the waist and use their legs in both attack and defence in Freestyle Wrestling. It is contested at a wide variety of different weight levels: light flyweight, flyweight, bantamweight, featherweight, lightweight, welterweight, middleweight, light heavyweight, heavyweight and super heavyweight. Also, both men and women compete in Freestyle Wrestling at the Olympics, unlike Greco-Roman Wrestling.

The main objective is to pin down the opponent. A pin or fall involves tackling the opponent and place their shoulders firmly on the mat for a couple of seconds. This directly results in the victory. However, this is not the only way to win a game. Other ways are explained later in the winning section.

Two performers participate in a Freestyle Wrestling match, which is contested on the top of a large mat with eight sides. A circle is marked inside this octagon, and this is known as the fight circle. Participants are required to wear a variety of clothing items during an Olympic match. These include:

A Freestyle Wrestling uniform or a singlet is made up of Lycra or spandex. The main aim is to fit it tightly to the skin to offer maximum flexibility for the athlete and minimal grip for the opponent. 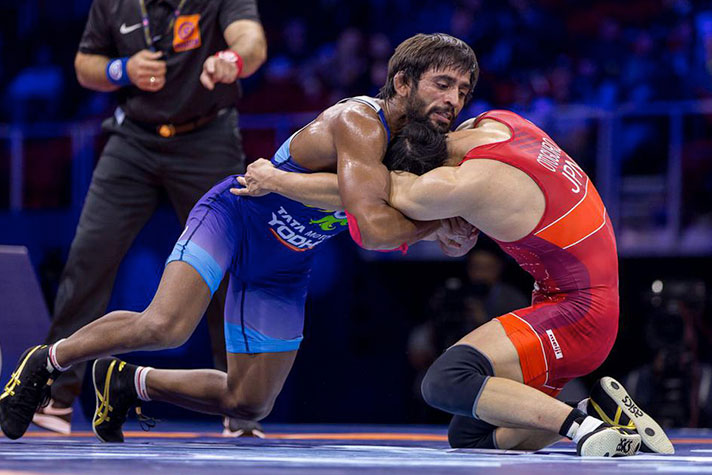 Athletes also wear specially designed shoes for contests to provide them with grip and mobility when they are competing on the top of the large spongy mat. These shoes are usually built with rubber soles.

A fight helmet is optional in Freestyle Wrestling. Some wrestlers receive recommendations from their medical team to wear headgear in order to protect themselves. But the majority prefers the freedom of no helmet in a fight.

Athletes also carry a blood rag with them into every fight. This is basically a handkerchief to wipe away any blood or sweat that may be compromising performance or risking an opponent.

Wrestlers are awarded points in a very specific points system which awards higher values to the more complex and difficult moves than the simpler ones.

A takedown awards between two to five points. These moves involve at least three points of contact (e.g. two arms, one knee) and may change in value depending on the style and execution.

5 points: 5 points are awarded for a takedown brought about by a throw in which a wrestler brings his opponent off of the mat and controls him so that his feet go directly above his head from the standing position into a direct and immediate danger position.

4 points: Like the 5-point throw, 4 points are also awarded for a takedown brought about by a throw of grand amplitude that does not put the opponent into a direct and immediate position of danger or the opposing wrestler maintains contact with at least one hand on the mat.

3 points: Generally, three points are awarded for a takedown of short amplitude throw that does not bring his opponent in a direct and immediate position of danger. Or for a takedown in which a wrestler’s opponent is taken from his feet or his stomach to his back or side so that he is in the danger position.

2 points: Two points are awarded for a takedown by a wrestler taking his opponent from his feet to his stomach. Or side such that his back or shoulders are not exposing to the mat and while in this position holding him down with control.

A “reversal” is when a wrestler manages to turn a defensive position into an attacking one. One point is awarded to the wrestler who manages to achieve a reversal during the fight.

Near Fall or “the danger position” can award a wrestler with two to three points. This is when a wrestler puts his/her opponent on their back but not able to pin them for a few seconds. The number of points scored will depend on the effectiveness, execution and length of the exposure move (2 points are for 2 seconds hold and 3 points for 5 seconds hold).

In the Freestyle Wrestling, an athlete may be penalised if they flee a hold, back away over the mat, or take a timeout when they are not forced to because of bleeding. If a wrestler is persistently offending then they are warned. Three such warnings can lead to disqualification. A wrestler can challenge the caution, which will either be upheld or overturned by the judges.

If a wrestler is forced outside of the designated circular fight area, then the opponent is awarded an “Out of Bounds” point.

There are various ways in which a player wins a match in Olympic Freestyle Wrestling: victory by a pin, technical pin, judges’ decision, default or disqualification.

Wrestlers always attempt to win a fight by pin or fall. This involves locking an opponent’s both shoulder blades down on the mat with control for two seconds. The referee then checks with the judges for their verdict on the validity of the pin. If they concur, the fight will end and the athlete who made the pin will be crowned with the victory.

A technical pin/fall victory is awarded to the wrestler who achieves a 10-point lead over the opponent at any stage during the fight.

In case of no pin or technical pin during the fight, the judges check their scorecards to see which wrestler scored the most points through the contest. The higher scoring player is declared the winner.

If a wrestler cannot continue a fight due to injury or does not take part in the contest for any reason, they forfeit the match and their opponent is declared as the winner by default.

If a wrestler is observed breaking the rules repeatedly and/or receives three cautions during a game, they are disqualified and the opponent wins the game.

Make sure you have most of your weight on the balls of your feet rather than your heels. You should never stand straight up leaving yourself open to a takedown. Your stance should allow you to attack as well as defend.

Wrestling involves a lot of motion. You can circle your opponent attack with a takedown attempt. Also, you may snap your opponent to the mat and spin around behind him. You don’t want to be clumsy or sloppy. Every move needs to be explosive and exact.

A wrestler must lower his level before shooting a takedown. In addition, a wrestler may lower and fake a sudden rise to force a reaction from the opponent. A wrestler must maintain good posture while changing levels. Bend at the knees always, not at the waist.

When shooting for a takedown on the opponent, don’t just reach for the legs or dive wildly for the same. Instead, ensure closeness to the opponent and then take a deep penetration step keeping the back straight and head up.

A back step is executed mostly when a wrestler performs a throw.

Raghav Heda
Raghav is a sports enthusiast and a content writer at Kreedon. Being a former state-level cricketer and Captain of the Basketball team at IIT Patna, he understands the problems faced by a student-athlete in India. He is also a die-hard NBA fan and has been following the league and American Sports Media for long. Comparing the Indian sports economy to American Sports' was something that motivated him to work for the development of Indian Sports.
Previous article20 best cricket umpires in the world of all time
Next article“There won’t be another Yuvi!” Fans bid emotional farewell to Yuvraj