Gowdham Murugan: An Engineer Who Found His True Calling in Motor Sports

In the game of life, we are often so busy accomplishing our responsibilities that we bury our inner calling. Someone may be the best singer during school. But as the race for building careers starts off, the mic is soon replaced by thick books and assignments. And then, once the vicious cycle of the corporate service begins, there’s hardly any time to rediscover your passion.

It is, thus, very difficult to find a person who is adept at managing both – the day job as well as the passion. By the weekdays, he calls himself an engineer. And by the weekends, you can see him zipping past the roads with utmost finesse.

This is the incredible story for all those who feel that the days of pursuing their passion are over.

Certain feelings cannot be put in words! Caption this! The person with the best Caption will be invited as a guest to the round 4 of the ongoing national racing championship by Sep 7,8 & 9 and get to know more about motorsports, the Indian motorsports.. #gowyracing #indianracers #indianmotorsports #18 #India #thirst #dream #passion #thrive #icon #motorsports P.C. @inmylenses

“I started driving at the age of 10 and have always loved pushing the car faster,” says Murugan when asked about how he first encountered his passion. “I have a different perspective towards cars and consider them as a part of me,” he adds.

But then, how did his tryst with racing start?

“It was down on a personal incident back then & at the same time I was leading my college as a captain & main driver for SAE BAJA event wherein students build a vehicle, test them & race against each other. We had an emotional disturbance within the team because of misunderstanding and few members in the team schemed to make me not drive the vehicle for the race.” 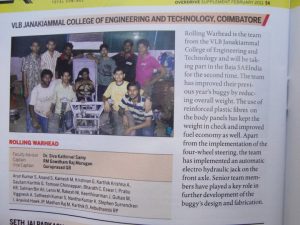 “Though I read that the majority of the team members were on my side and in case I had escalated to the faculty in-charge, I could have had them punished. As a captain I did not want the team to break after a year of hard work and gave up my chance of representing my college as a racer,” he says.

“I now represent India as a racer.”

And what about the people who were against him that night?

“They regretted for the BAJA night and apologized a few years later. Looking back, if that fateful night had not happened, I might not have become a professional racer after all,” Murugan, who hails from Coimbatore, says thoughtfully.

“Bad happenings push us to the limits and show us who we ourselves are. Destiny! If not why & how would a middle-class chap end up being a motorsport athlete?”

That is indeed true, isn’t it?

Setting the Arena on Fire

In 2013, Gowdham made it to the top of the list of Volkswagen Polo R cup drivers competition, an achievement he calls as his ‘first high’. He had to undergo two days of intense testing on skills & fitness. “I knew I would make it to the list but topping the list was something special,” the racer says.

He then appeared in the 2016 Buddh International circuit showdown in two races.
In the first race, he started in the 6th, gained positions and reached 3rd position. However, Gowdham ultimately ended at the 5th position.

The second race was unfortunately not as eventful. Having started at 4th position, Gowdham reached the leading position within the 3rd lap. However, the officials wrongly handed him a drive-through penalty (where the driver has to get in the pit lane with speed limit 60 kmph and then join the race back while others still go at their normal speed). Sadly, that wrong call meant that the Indian racer slipped from No.1 position to a lowly 15th.

Nonetheless, he showed indomitable spirit to overtake four cars once the penalty was served and ultimately end at the 11th position.

However, that doomed race had some positives as well. His spirited run towards the end was rightfully noticed by Volkswagen China expats.

“They invited me to come and race in China. It was only a few minutes later that I realized that it was a chance to represent India there.” Murugan says, before adding, “It felt good.”

Murugan works as a Vehicle Testing Engineer at Mahindra Research Valley in Chengalpattu. To stay ever fit, he undergoes a rigorous workout that includes Cycling for 100 to 150 km per session or swimming continuously for 50 laps.

But living two lives at the same time must be very difficult, especially since racing is a very costly affair. “I don’t consider them as struggles. Raising money for racing is a challenge.”

“The day I consider them as a struggle, I will be lacking motivation for racing. But yes, with more money, I could have more races. And the more races, the more wins. The time doesn’t suit the sports athletes for now. I hope things change quickly and companies start seeing us & sponsor.”

When the Tables Turned Down

When the doctor advices you to take rest to relieve stress, pick up your ride and do a 100 in the summer peak temperature #gowyracing #India #summer #chennai #mahabalipuram #cycleride #insane #workout #100km #doctor #advice #energy #living and you return back in a state that you could not even tie your shoe lace #passiontolive @fourpoints #btwin #triban100

Things came to a new low when Gowdham faced a freak accident in 2018. “I switched to rear wheel drive vehicle for the first time. While performing a double lane change (a common manoeuvre in a front wheel drive vehicles in which he raced in the past) I lost the control of my vehicle.”

Even before he could realize, Murugan was on the wall at the speed of over 120 kmph.

“I am thankful for my luck and the safety systems in motorsport that I walked out unscathed”. But the damage bills were huge and it took him a lot of time to repay it.

But whatever be the challenges, Gowdham Murugan’s never-say-die attitude keeps him growing stronger.

“2018 was not the best of years for me in racing but the years in which I race is all the best years of my life,” he says, signing off.

Gowdham Murugan will next be seen in action at the prestigious 2019 MSF Saga Cup on 14th April. We wish him all the luck!

For more interesting content on sports, stay tuned to KreedOn, the voice of Indian sports.

KreedOn Network
We are a team of sports writers who research about sports in India day in day out. Please reach out to us in case of any specific requirement of digital services on [email protected] .
Previous article
Sports Drinks: How Are They Beneficial for Athletes and Their Performance?
Next article
IPL 2019 KKR vs DC: “Colin Ingram Ruined My Day!” Twitter Reacts