This is what makes Sachin Tendulkar the ‘God of Cricket’- KreedOn 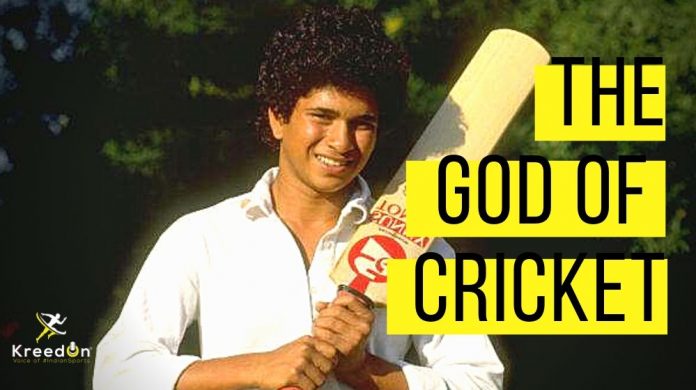 Sachin Tendulkar is often identified as the “God of Cricket”… But why is it so?

Cricket is not just another sport in India. It is the 3rd most important entity in our country after Politics and Bollywood. The 1990s witnessed a grim phase for cricket in India as the authority under which it was being functioned – BCCI – was declining financially. The likes of Sunil Gavaskar and Kapil Dev had hung up their boots, and the entire nation was waiting, with bated breath, for its next superstar to look up to. And it did come, albeit in the unlikeliest of packages – a 16-year-old, 5’6″ tall curly-haired man who knew only one expression – to smile. However, neither of that mattered. What, in fact, mattered was that he let his bat do the talking. At that time nobody knew this little boy is going to be the god of cricket in the world.

His impeccable shot selection, his crisp timing, and that sweet sound when the ball hit the middle of the bat captured the imagination of scores. As years went by, the commentators were scrambling for dictionaries to find words to describe and admire, but this man never once lost his Midas touch. By the end of an illustrious 24-years-long career, he had written the script for Modern Indian Cricket and given the world the ‘ideal’ way of batting. Sachin Tendulkar is not just a legendary cricketer but a divine entity who made miracles visually possible for ordinary people whenever they sat in front of their TV sets. Let us see and understand why Sachin Tendulkar is called the ‘God of Cricket’.

Numbers that prove Sachin is the God of Cricket

34,357 runs, 100 centuries, 164 half-centuries at an average of 51.74 in 664 international appearances along with 200 international wickets and 256 catches! This is how our Master Blaster’s international career looks like statistically! These numbers prove that there’s no doubt that Sachin is the complete athlete to have ever played the game of Cricket on this planet and rightly titled the God of Cricket. To do the same thing over and over again needs focus and consistency. But if a batsman scores consistently at an average of 50+ in 664 matches, it is indeed true that he is not an ordinary human being like all of us!

Records That Make Sachin The God Of Cricket

God of Cricket in Test

And it’s just not about the numbers. If anyone else would have got 10% as much as following and popularity similar to the one Sachin had, it is natural that the person might get affected and develop at least some amount of arrogance. However, that has certainly not been the case with Sachin Ramesh Tendulkar. He is still one of the most humble and down-to-earth people you could ever come across. In a 24-year-old long international career, Sachin has never been a part of a controversy. He has never been the talking point for any immoral incident or accident. Even after being considered as the best player by the best in the business, Sachin has never let that affect him or his performances.

Even after his retirement from all forms of cricket, mothers in India consider him as the ideal son, children think of him as the perfect mentor, and teachers consider him the ideal student! Tendulkar’s aura and simplicity make him a true gentleman and god of cricket who has been respected by every professional cricketer as well as a fan of the game of cricket. All these factors surely justify the godly presence he has throughout the world and why he is one in a billion!. Sachin -The Cricket God.

Origin of the term God of Cricket

Although there’s not one single person who originated the term, there have been traces of the origin of associating Sachin as the ‘God of Cricket’. Once when Sachin was in his prime form in the late 1990s, a group of fans in the Indian crowd came up with posters that said, “If cricket is our religion, then Sachin is our God.” This quote came in an age when social media didn’t exist. It was the Indian media that used Sachin’s persona and Indians’ affection towards Tendulkar and made this viral among the masses.

A lot of people also say that the first person to coin him this term was former Australian opener, Matthew Hayden. Hayden was a huge admirer of the way Sachin played. In one of his public statements, Hayden said-

Since then, there has been no looking back. The term ‘God of cricket’ has always been synonymous to Sachin Tendulkar. Maybe there is no better way of describing this living legend after all!

READ |30 Years of Sachin Tendulkar: 30 records that’ll blow you away!

Here are 14 famous quotations on Sachin Tendulkar that proves Sachin is the god of cricket.

“When I watched Sachin play, I was very struck by his technique. I never saw myself play, but I feel this fellow is playing much the way I used to play.”

Shashwat Chaturvedi
I am a media student, looking forward to specialize in either journalism or advertising. I'm a very big fan of the beautiful game of cricket and started following it because of MS Dhoni 14 years ago, when I was just 5.
Previous article10 incredible Guru Shishya Pairs that will make you cry
Next articleDream11 JAI vs DEL Pro Kabaddi League 2019 | PKL Prediction

Top 10 emotional moments in cricket World Cup that will make...