India’s star badminton player P V Sindhu paved way for a commanding 21-17, 21-8 win against USA’s Beiwan Zhang at the French Open Super 750 tournament in Paris on Tuesday. With this, she put to rest an upsetting run of hat-trick defeat by the same opponent.

In her opening match, the ace Indian shuttler finished the first round encounter in just 34 minutes. It was the straight second time that Sindhu was facing Zhang in the first round after in Denmark last week. The American shuttler had pulled off a third consecutive win over Sindhu, after the victories in the final matches of Indian Open 2018 and Indonesia Masters 2017. 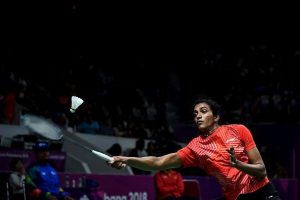 The third-seeded Sindhu dominated the court right from the beginning. Zhang gave a few tight exchanges, thus taking an 11-10 lead into the mid-game interval. This exchange of leads by the top-notch players before Sindhu levelled up her game for a triumph by 21-17.

The second game was a win-win situation for the Indian shuttler.  Sindhu headed the game by winning eight out of next nine points, thus taking a commanding lead by 11-4. Zhang managed to garner two more points before the Indian champion sealed the affair in no time. This win is definitely going to be a major motivational booster for the Rio Olympic silver medalist. Sindhu will now face the winner of the first-round match between Hong Kong’s Cheung Ngyan Yi and Sayako Sato of Japan.

To note, the year has been fruitful for Sindhu so far, by having reached the finals of Asian Games, Commonwealth Games, World Championships, to name a few.

However, it was not a good day for less-fancied Indian badminton double pair of Arjun MR and Shlok Ramachandran. They lost 14-21 and 17-21 by the Chinese badminton pair of Li Junhui and Liu Yunchen.

Bhawna Kothari
Lover of cultures, varied colors, and underdogs, Bhawna is a by-heart and professional playwright. Hailing from a journalism & communication background, she incorporates a careful study at both flips of the coin which is essentially required to be analytical in thoughts and words. Actively abreast of the current affairs around the globe, she likes knowing and bringing into light the unexplored. Problem solving via the power of content is what inspires her and hence KreedOn, a platform created for the betterment of sports ecosystem in India, is now her happy workplace!
Previous article
Karnam Malleswari Biography: How India’s Iron Lady Rose to Become a Weightlifting Legend
Next article
PKL Day 15: U Mumba rout Telugu Titans 40-21

Kidambi Srikanth Eases into Second Round of the French Open

Mahesh Bhupathi – The First Indian to win a Grand Slam...