Football is one of the most popular sports around the globe. Approximately 250 million players around the world play this beautiful game in more than 200 countries. And football in India still needs a lot of development. The dominance of cricket is massive and it is indeed the most popular sport in the country.  But in recent years, football has witnessed its rise. The sport has started gaining popularity among grassroots levels too. Even other sports like Badminton, Kabbadi, and Basketball have started gaining popularity. Let’s have a look at the history of the game, football records, best football players, best football club in the world, and much more. 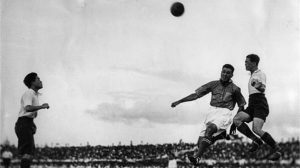 Football’s ascent in India began many years ago, when Mohun Bagan, a club founded in the 1890s, became the first Indian side to win the IFA (Indian Football Association) Shield before the country’s independence. But even after this no one was paying attention since football was rambling around with no set course to follow. Following years, some football clubs emerged. India’s biggest achievement could have been their participation in the 1950 World Cup but wished to withdraw due to lack of funds.

Later in 1996, the first football tournament was created, known as the National Football League which was organized in three divisions. The Indian National Football League was discarded in 2007 and the I League, now known as the Hero I League was introduced. Then, with a vision to expand football even more, Reliance foundation, in association with the All India Football Association launched Indian Super League, now known as Hero Indian Super League in 2014. Later in the year 2017, ISL got recognized by Asian Football Confederation, and with this, the winner of the ISL was granted a spot in the AFC Cup.

The Rise of Football in India

Nevertheless, Indian football came to prominence when they qualified for the 1950 FIFA World Cup in Brazil, but it wasn’t until the late 2000s that the Indian football squad made a significant impact. India won its inaugural Nehru Cup in August 2007, defeating Syria in the finals 1-0. The attention was now on India’s youthful football team. When they won the AFC Challenge Cup in August 2008, they lived up to the hype, and as they say, history repeats itself. In the 2009 Nehru Cup final, India defeated Syria once more. These victories gave Indians optimism that the Indian football team will soon be visible on the international football radar.

Perhaps the biggest achievement for Indian Football is hosting the 2017 FIFA Under 17 World Cup. 2017 was a banner year for Indian football, with the national side qualifying for the 2019 Asian Cup and the country successfully hosting the FIFA Under-17 World Cup. The Indian Under-17 team also performed admirably in the event.

The Face of Indian Football

Sunil Chhetri’s name is getting increasingly well-known and recognized. The forward has scored 80 goals for India, which makes him the third highest goalscorer in international football, and is just behind football superstars, Messi and Ronaldo.

A lot of homegrown talent has been promoted, particularly in the ISL, and marketing folks have worked hard to ensure that these names are remembered by viewers. The media’s coverage of football matches and tournaments has expanded dramatically, owing to the high demand for information.

Since then, football in India has grown exponentially and foreign teams and other capitalists are eyeing the Indian football market. Many European teams have tied up with some Indian clubs in an attempt to raid unpolished talents at the grassroots level. A few years back, Spanish giants, Atletico Madrid announced their franchise partnership with Atletico De Kolkata, which later ended soon. The parent business of City Football Group EPL Giants Manchester City purchased a significant investment in Mumbai City FC on November 28, 2019. This was the first time a big European club purchased a controlling share in an Indian club.

With all this to say the future of India in football definitely looks promising. Football clearly has a long way to go before it can compete with cricket in terms of popularity and money creation, but there is no denying that it has piqued the interest of the country’s youth. We surely want to see the Indian Football team sing our national anthem in FIFA World Cup.

Best Attackers in ISL of All Time

READ | Top 15 Health Benefits of Football You Should Know

10 most famous football players in India

How to Kick a football: Learn the best football kick technique

READ | Complete List of All The Domestic Football Tournaments In India

9 Steps to become a football coach in India

Greatest Footballer of All Time

Best Midfielder In The World

Best Football Managers In The World

Best Goalkeepers in the World

Richest football players in the world

Most goals in football

Best Women Footballers In The World

Best Football Leagues In The World

Best Football Club in the World

Richest Football Club in the World

For more interesting content on football, stay tuned to KreedOn, the voice of Indian sports.

Abhishek Mishra
Greetings, I'm Abhishek Mishra, a passionate sports writer, and football fanatic. Currently, I'm pursuing Bachelor's in Journalism and Mass Communication from GGSIPU, DELHI. I have a keen interest in sports and I aspire to become a sports journalist. I want to work in the overall development of sports and also work towards the grassroots and athlete recognition of our country.
Previous article
The Alpine Skier – Arif Khan Qualifies for Winter Olympics 2022
Next article
Sports business, goods & the Indian E. commerce industry – A case Study

Can the Uprising Stars of Indian Football Lift The U-17 FIFA...