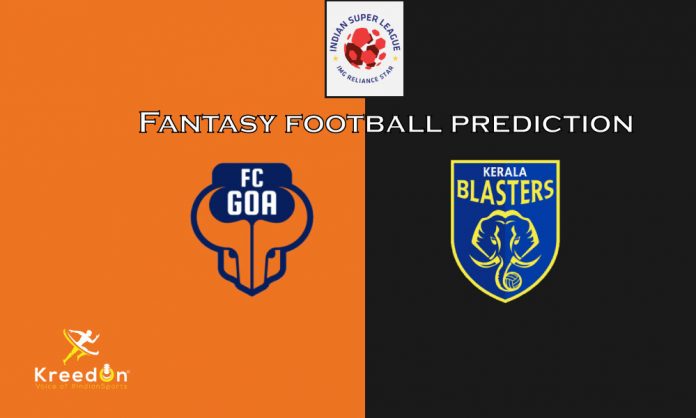 The 67th match of the Indian Super League will see FC Goa host Kerala Blasters at the Fatorda Stadium in Goa. The two last met on the 1st of December, producing a rather eventful game. Kerala went ahead twice, only for Goa to dramatically equalize the game in the 92nd minute after Fall was sent off in the 52nd minute.

FC Goa had the chance to go on top of the table when they played ATK in their last game. However, it was the 2 time-champions who came out on top in that fixture winning 2-0. The Gaurs will be looking to make a strong comeback at the expense of the Blasters.

Goa should be aware of how suddenly their defence can go from good to bad, which was evident in the match against Chennaiyin. The Gaurs will have to finish the game off early and work on solid defending to deny the Blasters any chance of getting a favourable outcome.

Kerala went down fighting 3-2 in the last game against Jamshedpur. The Blasters went ahead twice in the match; but defensive errors and an own goal by Ogbeche cost them the game. The Blasters are looking to secure a win which can take them up to the 6th place.

However, for the Blasters, it looks like it could be a tough game to take all 3 points. Given the unpredictability of the outcomes this season, we can expect Kerala Blasters to at least put up a fair fight.

Young keeper Mohammad Nawaz has conceded a total of 16 goals this season. However, he has also kept 4 clean sheets and made 28 saves so far. Nawaz will be eager to better his stats which will eventually help Goa reach the final stages. He makes it to our Dream11 squad with a better record as compared to his counterpart TP Rehenesh.

Mohamad Rakip is a fine young right-back who is performing well for Kerala Blasters. He will be our first pick for the squad because he will be looking to assist his strikers by crosses in the box.

Fall and Pena are two of the finest players in the league and will be putting in a strong display against Kerala. The duo is prone to errors, but they are sure to get you some points for your dream11 squad.

Sahal has been in and out of the squad for a while now. The bright, rising star has however registered two assists for his team, and his individual efforts in every game have gained him a spot in our team. Halicharan is one other player who has a bright future ahead of him and will be looking to impress against one of the best teams in the league.

Brandon, Hugo and Ahmed form a terrific midfield partnership. The trio has registered a total of 16 goal contributions in this season and are highly likely to perform against Kerala as well. So do pick a midfield 3 of Gaurs and including the players from Kerala Blasters.

Ferran has ten goal contributions to his name, which is a decent stat at this point in the league. He hasn’t scored in every game, but he is one such player who scores when he wants. Messi Bouli was on the scoresheet in Goa’s previous game and will be highly likely to create an opportunity that gets him a goal or an assist.

KreedOn Network
We are a team of sports writers who research about sports in India day in day out. Please reach out to us in case of any specific requirement of digital services on [email protected] .
Previous articleIndia U19 vs New Zealand U19 Dream11 Prediction | ICC U-19 Cricket World Cup 2020
Next article“0% Lag, 100% Swag” Shreyas Iyer earns rave reviews as Ind beat NZ