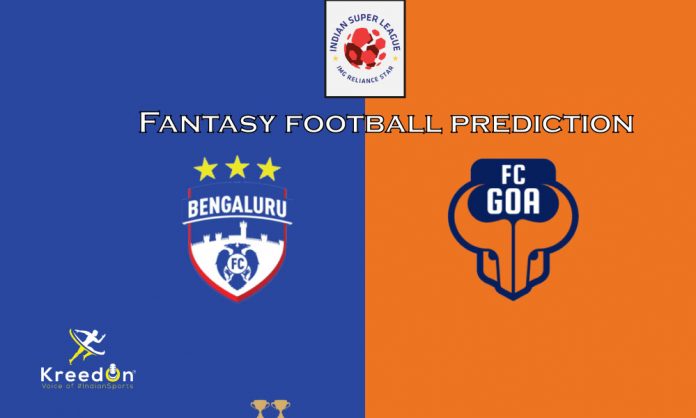 The Indian Super League enters the new decade with an electrifying fixture. The 50th match of the ISL features defending champions Bengaluru FC who are hosts to current table-toppers FC Goa. The fixture has all the elements to be a high octane football affair.

The Gaurs have lost just one game this season and sit comfortably in the summit, 3 points clear of ATK. They ended the year by playing a thrilling 7 goal fixture against Chennaiyin FC. In the 4-3 win over Chennaiyin, Goa had a comfortable 3-goal lead till half-time, until Chennaiyin scored 2 goals in quick succession.

FC Goa then scored another goal to make the score 4-2 before Chennaiyin scored their final 3rd goal of the night. It could have been rather embarrassing for the Gaurs to give away a 3 goal lead and then lose.

Going into the game against Bengaluru, they will be very confident of upsetting the defending Champions and further increasing the point gap.

The defending champions suffered their 2nd defeat of the season to ATK on Christmas day. The biggest issue for the Blues is their creativity in front of goals this season. Their attack line has underfired, costing them at times.


Going into the game against heavy weights FC Goa, the Blues thankfully have a home advantage. Bengaluru will also take some pride from the fact that they have beaten FC Goa the most number of times than any other ISL team.

Gurpreet Singh leads the way in this season’s clean sheets record. He has kept 6 clean sheets and conceded only 6 goals this season, which is why he makes the top choice goalkeeper.

Harmanjot and Juanan are the two defenders from Bengaluru FC who make our 4 man defence. They have been solid and have let in only 6 goals this season. Carlos Pena and Mourtada fall’s partnership in the heart of Goan defence is a force to be reckoned with, which is why they complete the 4 man defence.

Erik and Dimas have formed a strong partnership in the Bengaluru midfield. Their main concern is, however, the lack of creative play in midfield. A game against FC Goa will be the best occasion to create opportunities for the attackers who will go on and hurt the Goan defenders.

Brandon Fernandes is in tremendous goal contributing form this season. With 2 goals and 5 assists, the India international finds a way to make an impact on the game with his many abilities. Ahmed Jahouh is a rough midfielder and for any opponent to face him must be a real worry. These 4 midfielders are the best of the lot, which is why they make our dream11 squad.

Ferran Corominas is ISL’s top scorer, and even in this season he has scored 7 goals and registered 1 assist. Given the abilities of Ferran, he is a sure shot impact and way of getting points for your Dream11 squad. Another player who we can’t miss out is Sunil Chhetri. The Indian skipper has scored 5 goals in this ISL season and will be in the hunt for some more tonight.

Warad Bhat
Warad is passionate about brands, football, films and food. He enjoys reading about latest gadgets and technologies and spends his time either watching movies or cooking something new. Warad is a spiritual person who believes that to change the world you must change yourself from within.
Previous articleHere’s Sushil Kumar surprising reply to WFI’s denial of postponing trials
Next articleWatch: Virat Kohli leads Indian athletes to showcase 10-year transformation