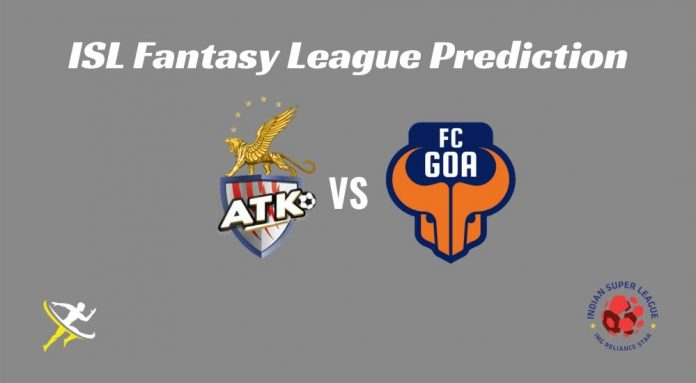 FC Goa welcome table-toppers ATK in the 38th match of the Indian Super League at the Fatorda Stadium, Goa. FC Goa has 12 points of 7 matches and sits on the fourth place just two points behind ATK, who sits on the top of ISL with 14 points.

While ATK will look to extend their lead on the top, Goa will look for a victory and displace Antonio Habas’s side from the top. Expect a high scoring and entertaining fixture as both the teams have scored the most goals this season.

Sergio Lobera’s Goa started the season with a 3-0 victory against Chennaiyin followed by a 1-1 draw against champions Bengaluru FC and a 2-2 draw vs NorthEast United. The Guars then won 2-4 at Mumbai City FC. High flying Goa was then hit with their only loss of the season at home vs Jamshedpur FC. They then drew away to Kerala Blasters and won by a solitary goal against Hyderabad FC.

After their loss against Kerala Blasters on match week 1, ATK has been excellent. They won against Hyderabad 5-0, Chennaiyin 1-0, Jamshedpur 3-1 and NorthEast United 3-0. They drew two games this season, a goalless draw against Odisha and 2-2 against Mumbai City FC.

With 15 goals, ATK is on the top of the scoring charts in this season of the Hero ISL. Their main men Roy Krishna has scored 6 goals and David Williams has scored 4 goals. Keeping them silent will be Goa’s biggest task. Apart from them, Eduardo Garcia Martin is also another threat in front of goal.

In goal, we have ATK’s, Arindam Bhattacharya. In 7 matches, he has made 14 saves and kept 4 clean sheets. He has a save percentage of 73.68% and conceded 0.71 goals a game. He will be crucial if ATK searches for a victory tonight.

Carlos Pena has featured for 624 minutes for Goa. He has made 10 interceptions crosses, 8 tackles 55 clearances and 9 blocks with an average of 56.26 passes per game. Pena has scored 2 goals this season. His colleague, Mourtada Fall has played 6 games.

Fall averages 49 passes per game and has made 56 clearances, 11 interceptions and 28 tackles. The towering centre-back has registered one goal and 2 assists for the Gaurs in this season.

Brandon Fernandes has registered 4 assists so far in the league. With 8 shots and 18 crosses, he averages 53 passes in a game. He has also made 23 tackles with 5 clearances and 6  blocks to help out his team defensively. His teammate Lenny Rodriguez has scored 2 goals this season for Goa.

Another name from the FC Goa midfield is Carl McHugh. The Irish midfielder has played 6 matches, scoring 1 goal in the process. With a pass accuracy of 70.64%, McHugh averages 33.5 passes per game. Defensively, he has made 19 tackles, 7 interceptions, 23 clearances and 7 blocks.

Our next player in our 5 man midfield is Edu Garcia. Garcia has played all of the 7 games for ATK scoring 3 goals and 1 assist in the process. He averages 15.86 passes per game with a 59.45% passing accuracy.

ISL 2019-20’s top scorer, Roy Krishna will look to help his team to a crucial victory today. In 7 matches, Krishna has 6 goals and 1 assist, averaging 0.86 goals per game. He also helps out defensively. He has made 19 tackles, 3 interceptions, 4 clearances and 5 blocks,

The highest goalscorer in ISL history, Ferran Corominas already has 3 goals to his name this season. With 8 shots and 1 cross, he averages 34 passes per game and will be looking eagerly to add goals more tonight.

Manan Dharamshi
I usually describe myself with three 'F's, i.e, Food, Football and Films. Born and Brought up in Bangalore since the mid-1990s, I have always had a huge interest in playing football, cricket and watching other sports. People who know me always tell I bleed football. Sports, and Football, in particular, has helped me through hard times and helped me to shape my view on the world. And that is one of the reasons why I want to serve as a Sports Journalist.
Previous article20 Best Marathon Shoes in India to Buy Online
Next articleIndia vs WI ODI Series: This bowler to replace injured Bhuvneshwar Kumar