Call them lethal guns or a pace spearhead, pace bowlers set the cricket games ablaze. Watching these bowlers taking a long run-up and delivering the ball at rocket speed is a treat for cricket fans. And what when the ball swings, edges after deceiving the batsman, and is carried over the slip! The game of cricket has undergone many changes. With the game getting increasingly competitive, and the batsmen more powerful, bowlers are breaking newer speed records. Today, let us glance through the 17 fastest bowlers in India.

While the country has been famous for creating World-class spinners, pacers have always taken a back seat. However, that is not true today. Over challenging away tours, India’s pace attack has started making a point. The speedsters are not only consistent but incisive as well. On that note, we advise our readers to pad up; wear your safety gear and face the top 17 fastest bowlers in India in all formats! Things got lucky for Umar Malik when in Sept 2021 he was named a short-term Covid-19 replacement for T. Natarajan by the Sunrisers Hyderabad.

On 3rd Oct. 2021, he made his debut in the IPL, against Kolkata Knight Riders. During the 49th match of the Indian Premier League 2021, he gained attention during the match between SRH and RCB, when he bowled 5 straight deliveries of speed more than 150 km/hr. On 5th May 2022, Umran Bowled the fastest ball by an Indian bowler. Playing against DC he clocked 157 kmph.

Who was the bowler who took the hat-trick in a Test match against Pakistan on their soil?  Irfan Pathan. This record is still exclusive. A replica of Wasim Akram, Irfan caught the attention of millions with his left-arm bowling action. His ability to swing the ball both ways and his accuracy with line and length helped him become a regular in the team before frequent injuries played spoilsport and ended his career early. He became famous through his stellar swing bowling and his handy batting skills. He was a vital clog in major series victories in the first decade of this era. 153.7 km/hr is the fastest ball bowled by this Indian.

Mohammed Shami is one of the fastest bowlers in India at present. We know you must have not noticed the speed meter when Mohammed Shami bowls. But the right-arm fast bowler clocks speed above 140 kmph. Mohammed Shami is of the finest reverse swing bowlers in today’s era, he never fails to perform for his team in the white jersey. Over the years, he has improved a lot and as a result, he is one of the finest performers in shorter versions of the game too. His ability to swing the ball in two directions makes him a huge asset for the Indian team.

READ | Top 25 fastest bowlers in the world across all formats

We know you were waiting for this name. To be honest, Zaheer Khan was the one who carried forward India’s fast bowling legacy after Kapil Dev. The lethal left-hander, at his peak, intimidated the best of batsmen with his faultless swing. Frequent injuries forced him to drop and sit out in many tournaments. During his initial years, he overcame the hurdle at a speed of 140 kmph. Zaheer has 610 wickets from 309 international games in his kitty.

Read | Types of Bowling in Cricket: A to Z guide for fast and spin bowling

Ask your father ‘who is the fastest bowler in India’, his answer probably has this name. The calm and composed Javagal Srinath ranks seventh here. Srinath was a key component of the Indian squad in the 1990s. He bagged a total of 551 wickets from 296 internationals. Javagal Srinath was second only to Kapil Dev in the number of Test wickets by an Indian quick.

He is a six feet four inches monster and many batsmen in the world are scared of him! You guessed it right. We are talking about Ishant Sharma who comes under the top 10 fast bowlers in India. Our country won at Lord’s Cricket Ground in 2014 after 28 years. Courtesy: Brilliant spell of Ishant Sharma. His in-swinging deliveries have proved to be a headache for all the batsmen. Ishant’s consistent line and length never allow the batsmen to rotate the strike often. 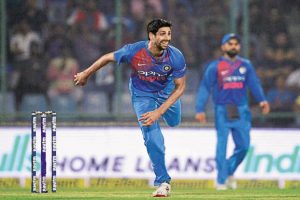 Ashish Nehra retired from all forms of cricket last year, was one of the deadliest Indian pacers who played for nearly two decades. Who can forget the six-wicket haul against England in the 2003 World Cup! Due to his unconventional way of bowling, Nehra grabbed the attention of many. However, he faced many problems in his career due to his fitness levels. Nehra finished his long and magnificent career with 235 wickets from 164 international games.

He is the man who worked hard on his accuracy, swing, and fitness. He is none other than Umesh Yadav. Umesh Yadav is one of the fastest bowlers in India at present. Yadav recorded the third-fastest delivery by an Indian. No wonder he regularly touches the 150 kmph mark frequently. During an away ODI series in Sri Lanka, Umesh touched 152.2 kmph on the speed meter. The specialty about this guy is he brings pace as well as precision in his spell. He is also one of the most economical bowlers, especially in T20 games.

You blink and his delivery is gone passed through you! Considered as a lethal pacer in the Indian contingent. Although he has played only 18 international games, Aaron has as many as 29 wickets. He, at times, was way too expensive. However, his consistency of bowling at a speed beyond 140 kmph makes him stand out. However, he wasn’t very accurate with the delivery so couldn’t fix his place in the squad.

We bet only a handful of cricket fans must have heard the legendary name of Muhammad Nisar. According to several reports, he was arguably India’s fastest bowler. In India’s maiden Test at Lord’s in 1932, Nissar debuted and ended with 5 for 93. Interesting fact: 13 of his 25 wickets came through bowled and leg-before. Nisar was a part of the side that also contained legends like CK Nayudu, the brothers’ Nazir Ali, and Wazir Ali, apart from his famous bowling partner, Amar Singh.

No doubt India’s frontline bowler, Jasprit Bumrah is here and hence ranks first in the list of fastest bowler in India. Bumrah’s ability to bowl inch-perfect yorkers in the death overs has provided India a really economical bowler in the death overs. Moreover, his quick bouncers and slower ones often deceive the batsmen. He has never let the Indian team down especially on foreign land with his deliveries clocking the speed over 140 kmph. The world first saw his ‘awkward’ bowling action when he played his stint in Indian Premier League’s club Mumbai Indians.

An inspiration to the young fast bowlers in India, Bhuvneshwar Kumar, better known as Bhuvi. The right-arm medium pacer, well known for his in-swings, always ranks among the fastest bowler in India. He has an extraordinary record of becoming the 1st Indian bowler to take a 5-wicket haul in all formats of cricket. He finds a spot on the Indian fast bowler list.

Bhuvneshwar Kumar was born on 5th February 1990 in Meerut, Uttar Pradesh. His predecessors being Praveen Kumar and RP Singh. He is considered to be one of the best swing bowlers in the world.

Amongst the fastest Indian bowler, RP Singh remains the most memorable. For his incredible pace of bowling, he has his own unique place in Indian cricket and in the Indian fast bowler list. Ranking next to Brett Lee and Shoaib Akhtar at times, RP Singh was the fastest bowler in India at his peak. To date, his Test debut against Pakistan where he took a 5-wicket haul is one the best episodes in cricket history.

The best fast bowler in India for first-class cricket is none other than Shivam Mavi. He is best known for his 5-wicket hall in the second first-class match of his career. Shivam has gained the spotlight after showcasing mesmerizing performances from the KKR side in the IPL. The list of Indian fast bowlers would seem incomplete without his name. 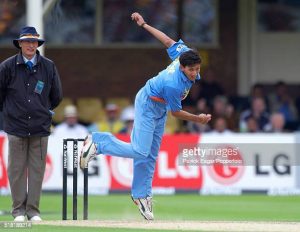 The third-highest wicket-taker for India in One day cricket, Ajit Agarkar grew in fame due to his performance in World Cups. Indian cricket team bowlers often mention his name whenever fast bowling under pressure is talked about. Ajit remains one of the highlighted players among the list of fastest bowler in India.

Akshay Badwe
The God taught me to love everybody but the most ones I learned to love are the athletes. Desire, determination and discipline takes me to a great deal of love towards sports. One can call me an avid sport maniac because I love to pen down some glorious content on sports. Being from journalism background with experience in media from couple of years I would like to keep this legacy going and now joining Kreedon gives me one more platform to explore the new world. I am always up to have a word on sports with a coffee.
Previous article
Learn All about Cricket umpire signals and what they actually mean
Next article
The World Cup News We Didn’t Want to Hear…