Karate Kata is an unarmed martial arts discipline that uses kicking, hitting, and defensive blocking with the arms and legs (Japanese: “empty hand”). The emphasis is on concentrating as much of the body’s force at the place and time of impact as possible. The hands (especially the knuckles and the outside edge), and the ball of the foot, heel, forearm, knee, and elbow are all striking surfaces. Practice strikes on padded surfaces or wood to toughen them all. An adept can break pine boards up to several inches thick with his or her bare hands or foot. Timing, strategy, and spirit, on the other hand, are all seen as equally vital as physical toughness. Today we will learn each & everything about this ancient sport – Karate.

Blows and kicks are stopped short in sporting karate and sparring (Kumite) in training, preferably within an inch of contact. If neither participant has earned a clear “killing” point in the judges’ opinion, sporting contests usually run around three minutes until a judgment. Individual contestants compete in form (kata) contests in which they perform a series of motions imitating defense and counterattack against many opponents. As in gymnastics, performances are judged by a panel of judges.

You should now have a fundamental understanding of karate and how it works. Remember, this is a combat art in which two people compete against each other. They will attempt to gain points by landing kicks and punches, however, various strikes will earn varying scores. At the end of the tournament, the participant with the most points will be declared the champion. As a karate practitioner progresses, he or she advances in the belt ranking system and receives a new color (the best being black). Competitors must respect each other during contests, as karate is regarded as a mental and physical sport that necessitates a positive attitude.

A Brief History of Karate Sport

Karate developed through the ages in East Asia, eventually becoming systematized in Okinawa in the 17th century, most likely by individuals who were not allowed to carry firearms. In the 1920s, it was brought to Japan. Several schools and systems arose, each with its own set of tactics and training methods. Karate, like other Asian martial arts, emphasizes mental attitude, politeness routines, costumes, and a complicated ranking system (by the color of the belt). There is some technical overlap between different combat systems.

Karate at the Olympics

Karate is a brand-new Olympic sport and made its debut in the Tokyo 2020 Olympic Games (along with four other new sports).

Types of Events in Karate

Two karate events in Tokyo 2020: Kumite and Kata. Karate, on the other hand, has been excluded from the Olympic sports program for the 2024 Games in Paris.

Also Read | Gymnastics: All you need to know about the sport

There are three weight classes in the Kumite tournament (men: 67 kg, 75 kg, +75 kg, women: 55 kg, 61 kg, +61 kg). Fights can last anywhere from one to three minutes. Kicks, punches, strikes, throws, and sweeps are used to gain points. The fighter who scores eight points more than their opponent or has the most points after the period is declared the winner. In the event of a tie, the participant who earned the first point without being challenged wins.

Kata participants are assessed on the strength and accuracy of their moves. In a performance routine, competitors take turns showing their kata. A panel of judges assesses the outcome, each assigning a score based on technical and athletic performance. To decide the winner, the two highest and lowest scores are eliminated.

The Road to the Olympics

The International Olympic Committee (IOC) voted in August 2009 on whether two sports should be included in the 2016 Olympic Games in Rio. Karate was a strong candidate, but it fell short when the sports of golf and rugby were chosen. It was ultimately approved onto the schedule for the 2020 Tokyo Olympic Games, along with four other new sports, after much campaigning.

Karate’s participation was viewed as challenging given the presence of many other combat sports in the Olympic program, including boxing, judo, taekwondo, fencing, and wrestling.

READ | Weightlifting | All you need to know about the sport

The straight punch, also known as Choku Zuki in Japanese or more generally known as the jab, is the most basic punch available. Making a fist with the fingers curled into the palm and the thumb tucked in between the first and second knuckles is how to perform this technique. Because the knuckles of the pointer and middle finger are the strongest part of the hand, they should be the hitting point.

This punch, known in Japanese as Oi-Zuki, begins with the punching leg moving into a front stance or Zenkutsu Dachi. When throwing the punch, use the same arm technique as when throwing a straight punch. However, to add force to this punch, you must also press both the front hip and pectoral forward.

The front kick, also known as Mae Geri in Japanese, is one of the most adaptable kicks in Karate, since it may be utilized swiftly and sharply as a snapping front kick, or longer and more forcefully as a thrusting front kick. It may also be done in a fighting posture from the rear or front leg. The four basic steps of any kick are as follows: Perform the kick by raising the kicking leg with a bent knee and ankle, returning to the chamber, and finally putting the leg down. The flat of the foot should be the focal point.

The front kick, also known as Mae Geri in Japanese, is one of the most versatile kicks in Karate, since it may be used as a snapping front kick or a thrusting front kick, and it can be used quickly and harshly as a snapping front kick. It may also be done from the back or front leg in a combat stance. The following are the four basic steps in any kick: The kick is executed by lifting the kicking leg with a bent knee and ankle, returning to the chamber, and lastly lowering the leg. The focus should be on the flat of the foot.

In karate, several stances might assist you to maximize your offensive and defense. The side stance, also known as Kiba Dachi in Japanese, is one of the three fundamental stances. This stance is achieved by maintaining your feet wide and parallel, keeping your back straight, pointing your knees and feet inwards, and putting the majority of your weight on your lower body.

Also known as Kokutsu Dachi in Japanese, is one of the three basic stances. Maintain a straight front leg with forward-pointing feet, a slightly bent front knee, a significantly bent back knee, both feet apart by one and a half times your shoulder length, an upward pelvis, a straight back and neck, and 70% of your weight on your back foot, with 30% on your front foot.

The Karate sports competition area is 8 m sq. An additional 2 m on all sides is extended as a safety area.  A half-meter-long line must be drawn 2 m from the center of the competition area. It is used for positioning the match Referee.

2 parallel lines, one m each, and at right angles to the Referee’s line must be drawn at a distance of 1.5 m from the center of the competition area. This line is used for positioning the competitors. 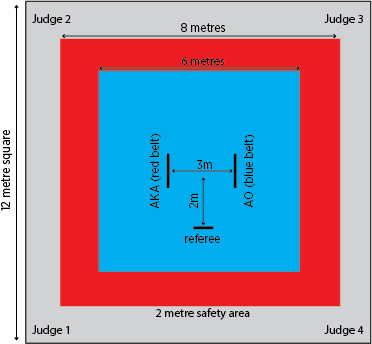 Is Karate Japanese or Chinese?

Is karate better than taekwondo?

Karate might be a better choice if you want more balanced and full-body moves. But if you want to learn fast and more kicking moves, taekwondo is the better option than Karate. You should try beginner classes in both disciplines to have a better idea of which martial arts style suits you the best.

Is karate hard to learn?

Karate is quite effective as a form of self-defense and martial artists consider karate as easy to learn only when done correctly. Techniques involved in karate include punching, kicking, and sparring.

Top 25 fastest bowler in the world across all formats: Complete...