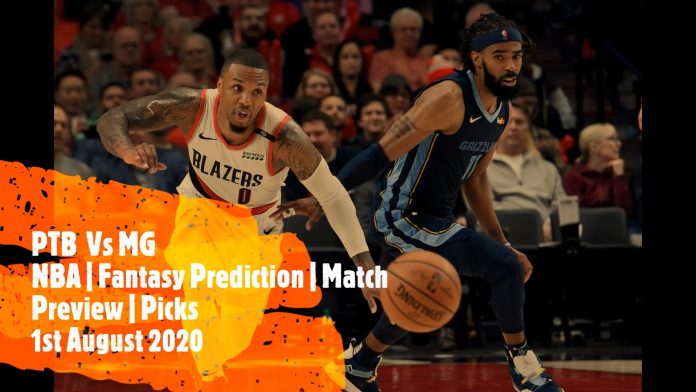 The nba action has finally begun and now its time for dame and team to take on the young and dynamic morant’s side. The second day of seeding brings you the great showdown between the Memphis Grizzlies and Portland Trail Blazers. After beating the Trail Blazers by 111-104 in february at home, the Grizzlies are to meet their foes, second and final time in the season.

The two would face each other at a neutral site this time. Let us have a preview of the match and an in depth analysis on what we can expect from this clash.

The Grizzlies entered the bubble as No. 8 seed in the Western Conference with 3.5 games ahead of Portland. As the Grizzlies would want to hold their seed position, the Trail Blazers desperately need a win. The Trail Blazers are going to have a difficult time in the next few weeks, with this game as the first hurdle. Both the teams would be playing after a long layoff of almost 5 months. This can be a strong factor in the game.

The interesting thing is, in the last 12 encounters between the teams, no team has won two straight matches.

The Trail Blaizers are the 4th worst team, when it comes to defending the 3-point line. The opponents score 37.7% from downtown. The team surrendered 114.1 pts per 100 possessions. This shows that the team is really struggling with their defence. Grizzlies on the other hand allowed 110.4 points per 100 possession.

The Trail Blazers will miss T. Ariza though Jusuf Nurkic and Zach Collins are back from injuries, thus strengthening their offense and defence as well. The star player D. Lillard would lead the show against J. Morant and team Memphis. Being the more experienced team, the trail blazers should create pressure right from the start. Even though the Blazers have a weak defence they have much more dangerous players than memphis.

It has been a series of ups and down for the trail blazers due to injuries of big players and poor defence. Damien Lillard is a must have in your team, as he will have all the responsibility to drive the Trail Blazers home.

Hassan Whiteside and Jonas Valanciunas can give you major rebound and block points.

As T. Ariza is out and Z. Collins is back, he can be considered along with Jusuf Nurkic.

From the Memphis Grizzlies Ja Morant has been the leading scorer. He will be scoring most of the points today along with J. Jackson.

B. Clarke has been in good form off the bench and can give you good fantasy points.

KreedOn Network
We are a team of sports writers who research about sports in India day in day out. Please reach out to us in case of any specific requirement of digital services on [email protected] .
Previous articleLakers Vs Clippers Dream11 Fantasy Prediction | 31st July 2020
Next articleTop 10: List of Best Squash Shoes In An Affordable Range