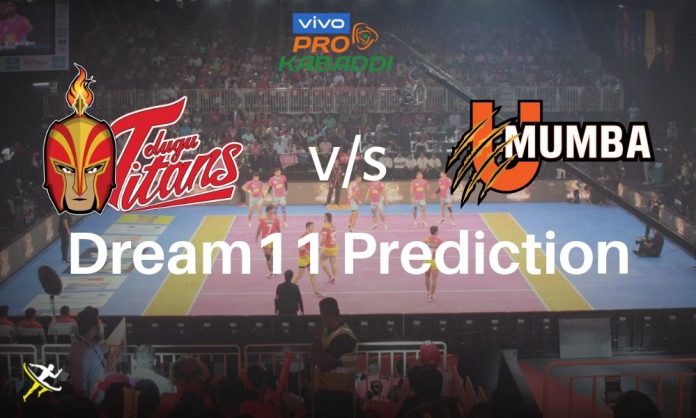 The cricket season has come to an end. But with that, it has brought a dawn of new season of another thrilling sport- the Kabaddi season. The country will witness a prolonged edition of another explosive Pro Kabaddi League season. The electric tournament opener will be U Mumba take on Telugu Titans.

U Mumba showed their intent to everyone by doing clever business in this year’s auction of the latest edition of PKL. Already a strong defending powerhouse, the Mumbai team have spent significant cash in the department to further strengthen the backline.Contrastingly, Telugu Titans have pumped in cash to procure extra raiders into their squad. Their acquisition of starman Siddharth Desai for record fee clearly shows their high ambitions. As a result, the side looks a solid unit now.

Dream11 Tips and Tricks Telugu Titans vs U Mumba

Defenders: One of the game’s best defenders, Fazel Atrachali becomes an automatic choice for U Mumba. The Iranian had scalped 83 tackle points last season, the third highest in the league.  He can be matched with his counterpart in Telugu Titans – Vishal Bharadwaj. Bharadwaj was Telugu TItans’ best defender in 2018 with 60 tackle points. The duo will make for a formidable defence. Titans’ captain Abozar Mohajermighani is another defender you can consider in place of Bharadwaj, considering the fact that the Iranian could be equally good but 0.5 credits cheaper.

All-rounders: U Mumba all-rounder Sandeep Narwal becomes an automatic choice in the all-rounder department. The player, which his new team bought for Rs. 89 lakhs, racked up 41 tackle points besides scoring 25 raid points last year. To match him up, Farhad Milaghardan remains the only other safe choice.

Raiders: Telugu Titans’ newboy Siddharth Desai was one of the best raiders in the league last year and that was reflected in the PKL Auction when he became the costliest player at Rs. 1.45 crores. Although he is costly at 16.5 credits, Desai is every penny worth spending. M Athul will be a good choice as the second raider. Having developed a reputation for being a super-sub, the player scored 55 points, mostly from the bench. Lastly, inexperienced but talented Telugu player Ankit Beniwal could be the third raider.

Although traditionally, U Mumba have been the dominant force of the two, things are pretty different this time around. Telugu Titans have spent aggressively in the auctions and the hefty but smart acquisition of Siddharth Desai is expected to make a huge difference for the side. With Bharadwaj and skipper Mohajermighani at the back, the team looks much balanced and formidable. Thus, we back Telugu Titans to win this particular fixture.

KreedOn Network
We are a team of sports writers who research about sports in India day in day out. Please reach out to us in case of any specific requirement of digital services on [email protected] .
Previous articlePro Kabaddi 2019 Full Schedule: Time table, fixtures,match timings,venues
Next articleSports Minister has promised this for growth of Indian Football

The Indian Olympic Association (IOA) said on Monday it didn’t sanction any visit for the kabaddi team to Pakistan for a world-level tournament. An Indian...
Read more
Dabang Delhi K.C.

After a thrilling action that spanned 13 weeks and some 136 odd hard-fought games, we are finally into the most important stage of the...
Read more
Bengal Warriors