Would you ever think that a small girl with flat fleet will stun the world with her artistic gymnastic skills?

Considered as the main drawback for a gymnast, Dipa Karmakar had flat feet. However, she did not let that stop her from achieving glory. She trained for hours and turned her weakness into her strength.

An excellent example of how hard work always triumphs inborn talent, Dipa made gymnastics a household topic in India. Mind you, that is not an easy feat in a country obsessed with cricket. When she perfectly landed the Produnova vault, she caught the imagination of the entire country. 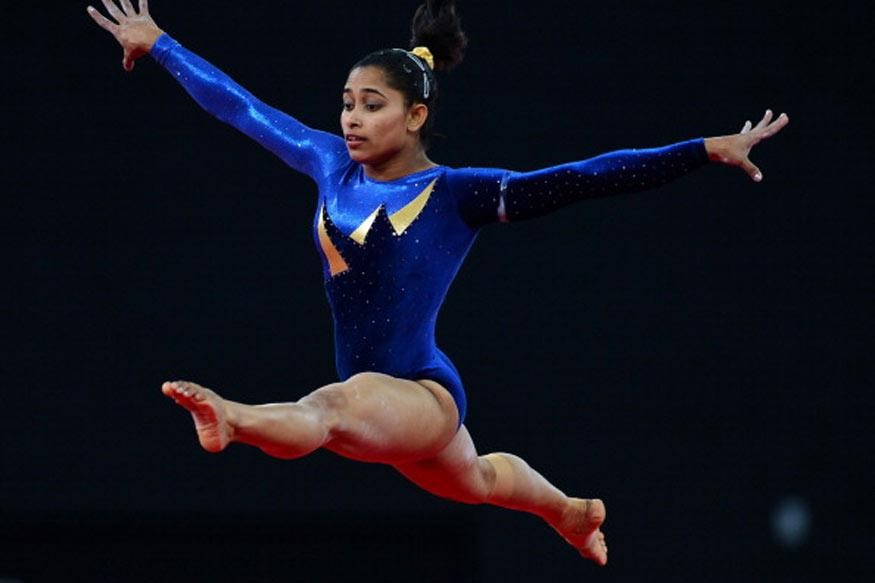 Dipa was born in Tripura’s capital city of Agartala. Despite having flat feet at the tender age of 6, Dipa and her parents decided to make her the champion in gymnastics. In a state where people struggled for proper food, Dipa had to face lots of challenges when it came to training. In fact, her first vault was on the sections of an old two-wheeler. The next fitness centre Dipa joined did not possess even proper pieces of equipment like a vaulting table. She therefore would put mats together contend in that setting. Since Dipa possed deep intent to be the best gymnast ever, the outside conditions didn’t matter. 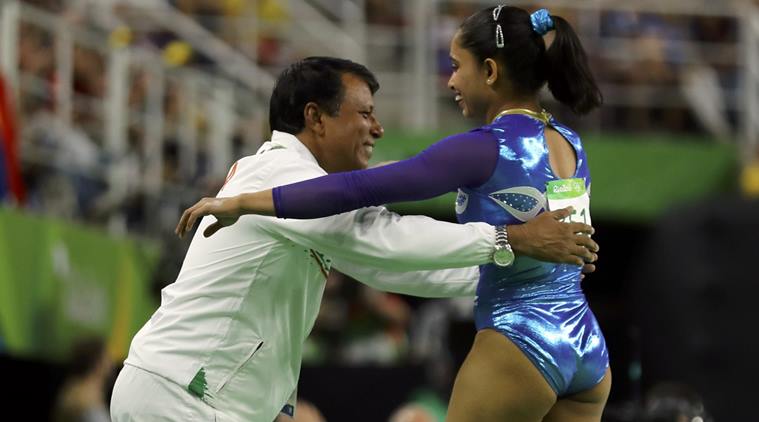 It took hours of practice to develop arched feet, but Dipa never gave up.

She believes that coach Nandi changed her life. He has been training her for almost last two decades now and the student has never disobeyed her teacher even once. She accepts that she has argued with Nandi when she was really angry, but listened to her guru after calming down.

The coach is equally proud of his protégé. “Desire, hunger to do well in gymnastics. Dipa has that. She told me once ‘Whatever you want me to do, I will not say no to you coach’,” and except when she loses her temper with me, she has kept her word,” Nandi told Firstpost in an interview.

Dipa is sponsored by GoSports Foundation. It is an independent, non-profit venture started in 2008 to offer expertise and financial aid to Olympic athletes.

Produnova Vault – The Vault of Death

Named after athlete Yelena Produnova, Produnova is the hardest vault performed in women’s artistic gymnastics. Dipa is only the fifth woman in history to land this deadly vault. It involves a front handspring onto the vaulting horse and two somersaults. Many prominent gymnasts hesitate from attempting this vault. Even a single mistake can lead to the gymnast breaking her neck or spine. 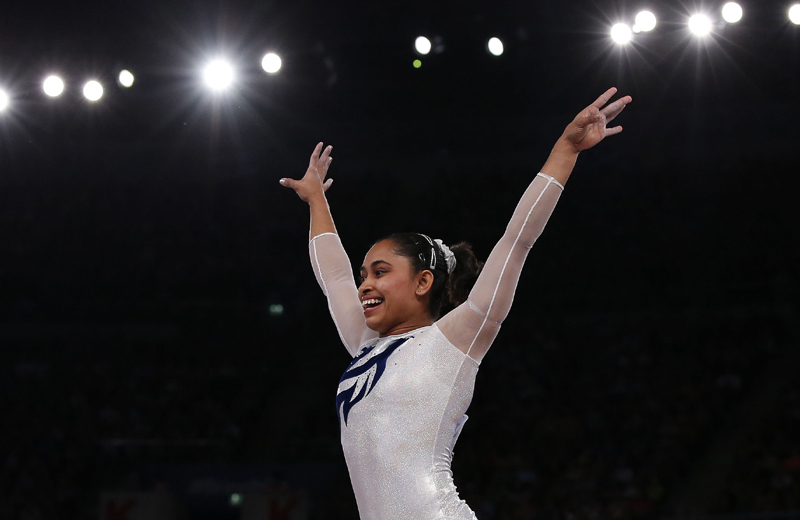 Dipa Karmakar at an event(Reuters)

Dipa’s illustrious gymnastics journey started with a gold medal in the Junior Nationals 2008. After that, she again got top honours at the National Games of India in 2011. She should immense class by winning gold medals in balance beam, floor, vault, uneven bars, and for all-around performance. She has more than 77 medals to her name at state, national, and international levels.

Dipa injured her right knee while preparing for the Asian Artistic Gymnastics in 2017. Hence, most of the year was spent in recuperation. She couldn’t participate in any events that year as she underwent a corrective surgery.

She couldn’t attend the Commonwealth Games 2018 qualifiers as well. The injury turned out to be a big setback for the young gymnast and her numerous opportunities because of it. However, now she is fit and fine and all set for the prestigious Asiads. She is even more motivated now, as she wants to make up for the lost chances.

Excerpts from an interview with The Times of India,

“A lot of people said it is extremely difficult for gymnasts to come back after surgery, some were saying I am finished since it was two years after Olympics. But I was ready to go through the surgery after I knew I had an ACL. There are other sportspersons who made a successful comeback. I tried to take it positively and due to the support of my coach, family, physio, SAI, Sports Ministry, GoSports I could make a comeback.”

After a difficult 2017, Dipa made a golden comeback at the FIG Artistic Gymnastics World Challenge Cup at Mersin, Turkey. She won a gold medal in the vault event, becoming the first Indian gymnast to achieve this feat.

Once again she received a lot of love from Indian fans and famous celebrities. It is truly incredible that the entire country is talking about gymnastics. 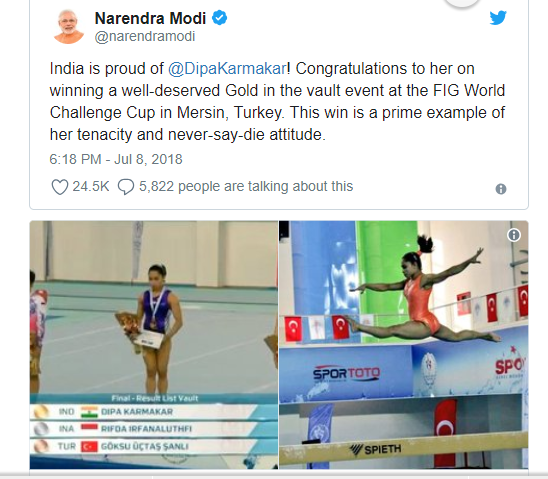 After her phenomenal comeback, we can only expect more victories for her. The gymnast has broken many records and brought gymnastics to the centre stage. She missed out on a podium finish at the last edition of the Asian Games and will be working extra hard to make for it. It is a bummer that we won’t be able to see her spectacular Produnova, as she has just recuperated from a serious injury. We can’t wait to see what the feisty gymnast has up her sleeve! 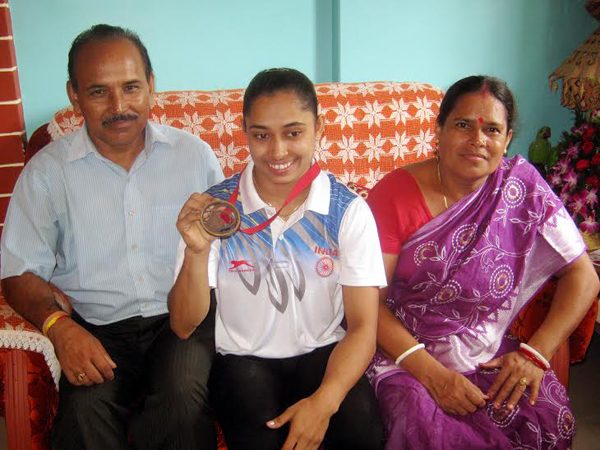 Dipa with her proud parents

Dipa’s father, Dulal Karmakar is a weightlifting coach and her mother Gouri is a housewife. Her father was working at the Sports Authority of India and encouraged Dipa to try her hand at gymnastics.

Dipa was very restless as a child. Dulal wanted to channelize her energy into a sport. He also believed that with her overall personality and build, gymnastics will be the perfect sport for her.

Her parents have supported her at every step and are extremely proud of their daughter’s achievements.

It was reported by The Hindu that Dipa had received brand endorsements worth upto 35-40 lakhs after the Olympics. Also, Dipa was gifted a brand new BMW 320d car along with her fellow Olympians by the cricketing legend Sachin Tendulkar. She sold it later that year due to bad road conditions and lack of service centres in the city.

Dipa grabbed headlines that year by declining a Rs 30 lakhs worth of financial assistance by Sports Authority of India and instead asked for basic vault tables. Dipa also featured in the Forbes 30 Under 30 Asia in 2017.

I owe my career to my father. Baba never lost a state weightlifting championship in Tripura when he competed. He had only one regret that he could never wear the Tricolor. His only wish of me was to wear the national colours once. Read more about my journey in The Small Wonder. Pre-order link in my bio

Thank you CII for the honour and appreciation

Many many happy returns of the day @amitabhbachchan sir!!?

Happy Teachers day Guru ji ….Through all the hard work ,pain , strugggle and accomplishments , you have always been there . Thank you Nandi sir for always being there for me …….

Happy Olympic day ! I feel so honoured to be an Olympian and proud to have represented india ??…

Get all such Indian sports stories directly delivered to you at KreedOn.

Mamta Thatte
A passionate foodie, a versatile writer, and now a sports enthusiast, Mamta is always open to exploring new avenues. She has a vast experience in Web Content Writing, Editing, and Social Media Management. A self-confessed coffee and dark chocolate addict, she believes in following her heart and giving her 100% into everything she does.
Previous article
Kheloge, Koodoge Banoge Nawaab: How Encouragement for Outdoor Sports Can Make Your Kid Athlete Already Feel like a Winner
Next article
Legendary Vishwanathan Anand Wins Tata Steel Chess India Blitz Tournament

Indian Sports Facts | All Time Greatest Achievements of India in...

Dipa Karmakar and Her Coach eye for a comeback in Asian...