Ace gymnast Dipa Karmakar will not be performing the dangerous Produnova move at the upcoming Asian Games. She was forced to dump the Produnova routine following a career-threatening knee injury and will switch to the vault after the Asian Games.

Dipa Karmakar had earlier put Indian gymnastics on the world map with an impeccable display of Produnova vault at the 2016 Rio Olympics, where she finished a creditable fourth.

However, she was not able to compete in any tournament after the Rio move due to an Anterior Cruciate Ligament (ACL) injury in her right knee. The Indian athlete underwent surgery in April last year and missed certain international games such as Asian Championship, World Championship in Canada last year along with the 2018 Commonwealth Games in Australia. 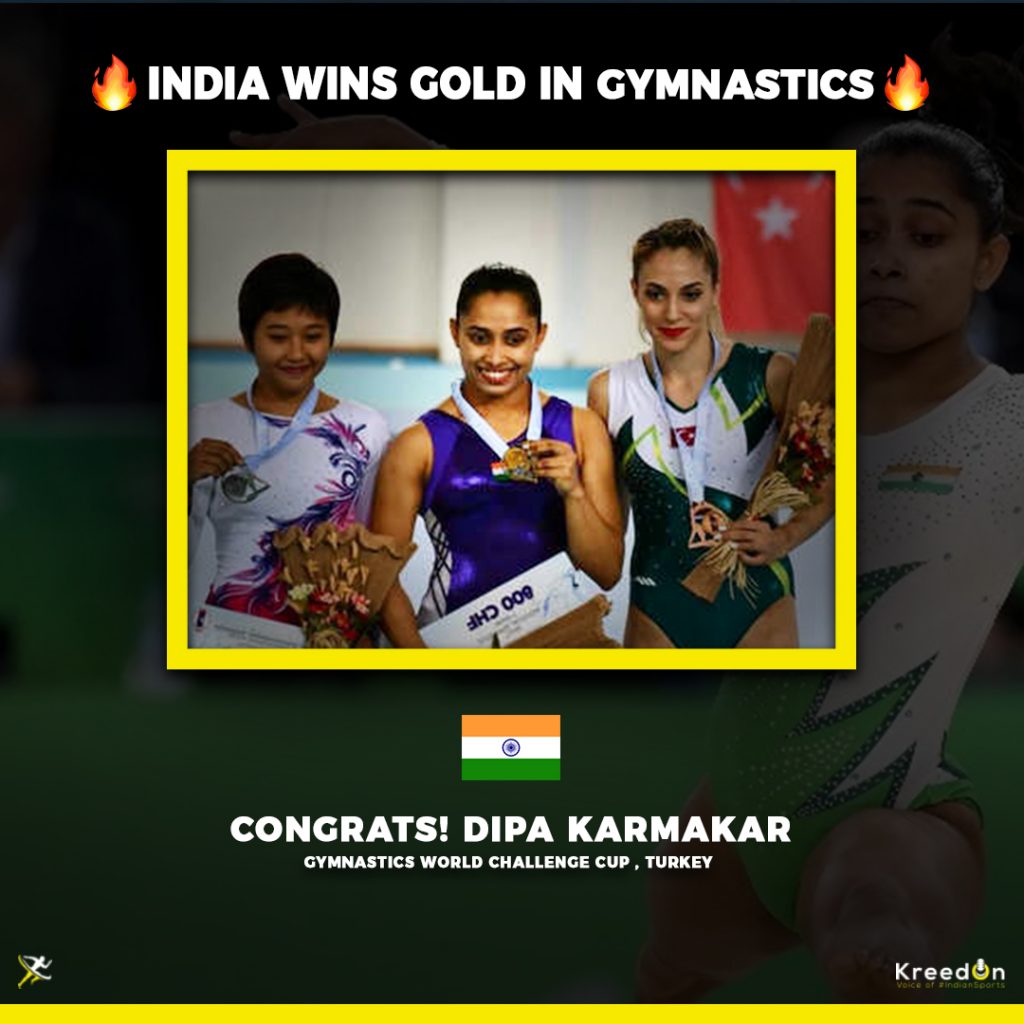 She then returned to action at the World Challenge Cup in Turkey on July 8 and then opted for Handspring 360 and Tsukahara 720 en route her gold medal-winning feat. She had scripted history by becoming the first Indian gymnast to clinch a gold medal at a global event.

Will Dipa Karmakar try the Produnova after Asian Games?

“I will do it but it will take time. I have spent a lot of time in mastering this but after injury it was difficult. Difficulty level in Produnova has been reduced to 6.4 from 7, in fact average scores in difficulties are being reduced but I’ll be back doing Produnova. I will not give it up,” Dipa told PTI today.

Her mentor and coach Bisheshwar Nandi, who has guided her career since her first steps in gymnastics, said there is not much time to try it at the upcoming Asian Games but he is hopeful to switch back to Produnova by the year-end.

“I will try for Produnova by the end of this year because sometimes she feels pain in her knee even now. It is a complicated sport and it is natural but she will overcome that,” he said.

“According to the new code of points, the difficulty level of Produnova has been reduced to 6.4 from 7, but we will keep it as we have worked hard on this for the last few years.”

Dipa scored 14.15 to clinch the gold medal in Turkey but said she will need to score higher to win a medal at the Asian Games.

“Asian Games is very tough. China, Japan, Korea will pose a big challenge. I can’t guarantee a medal. But I will give my best. I realised where I lacked during the World Cup. I will work on those areas. In Asian Games I will have to score more, maybe 14.2 or 14.3 will give me a chance to win a medal,” she said.

“The gold has given her a lot of confidence and there is a month’s time, so we will try to increase the difficulty level now. She will have to go for a score of 14.5 to win a medal. It will be a big challenge,” said coach Bishweshwar Nandi.

“If we can go from 360 to 540 in Handspring and Tsukahara 720, then it will be a big boost. And if we can bring her back to her level in Produnova, then we can challenge at the world level since qualifying for Olympics is the aim,” he added.

Talking about her performance at World Challenge Cup, Dipa said: “I scored 14.15 which is not a bad score, which can hopefully grant me a place in the final of Asian Games. Of course, increasing difficulty is important but I can’t take too much risk with my leg, I will go by what my coach decides.”

Asked if she ever felt disheartened during the injury phase, Dipa said: “I was nervous because a lot happens in two years. Body changes. Difficulty levels also changed. It took a lot of mental and physical strength but I had no doubt about my comeback.

“A lot of people said it is extremely difficult for gymnasts to come back after surgery, some were saying I am finished since it was two years after the Olympics.

“But I was ready to go through the surgery after I knew I had an ACL. There are other sportspersons who made a successful comeback. I tried to take it positively and due to the support of my coach, family, physio, SAI, Sports Ministry, GoSports I could make a comeback.

“I feel blessed that all celebrities supported me. They congratulated me. The last two years, I faced a lot of criticism with people saying I should give up and sit at home, and I am finished. So I am glad that I was not forgotten.

Vardan Pandhare
Vardhan is an author who loves creativity. He enjoys experimenting in various fields. After completing his graduation, he was sure about one thing! His love for sports. He is now living his dream of being creative with words in the field of sports. He has since then always brought the latest news and updates for all the sports fans.
Previous article
Senior Players Revolt forces Women’s Cricket Team Coach Tushar Arothe to Resign
Next article
Central Government keen to make India a World Golf Tourism Hub

I am absolutely fit, Will give my best at Asian Games...