Dhawal Kulkarni is an Indian swing bowler who has always attracted the selector’s attention and has often been given a chance to play in the Indian team. He has however not received many opportunities to play international matches due to the belief that he depends a lot on the pitch.

Dhawal Kulkarni is a right-arm medium-pace bowler and can also bat as a right-handed lower-order batsman.

Dhawal plays for Mumbai in Domestic Cricket and Mumbai Indians in IPL. He has consistently performed wherever he has been given the opportunity to and has proven himself a reliable swing bowler.

Let’s look at the life and style of Dhawal Kulkarni.

Dhawal Kulkarni’s father is Sunil Kulkarni and his mother’s name is Pramila Kulkarni. He also has a younger sister whose name is Dhanashree Kulkarni. 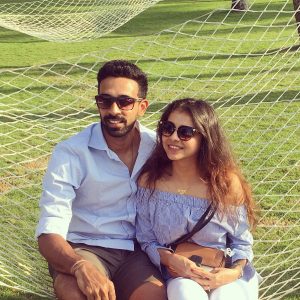 He got married to Shraddha Kharpude, a well-known fashion coordinator of Femina Magazine in 2016.

Dhawal’s first remarkable performance came in the Under 17 Vijay Merchant Trophy. He was then given an opportunity to play for the Under-19 national side in the 2007 series against Sri Lanka.

His consistency in performance in the Under 17 and 19 level earned him a spot in the Mumbai squad for the 2013 Ranji Season.

Dhawal impressed everyone with his bowling in his debut Ranji Season itself as he went on to take 42 wickets. His record in Ranji Trophy only improved itself as he became the highest wicket-taker once again in the 2012-13 Ranji Season as Mumbai lifted the trophy for the 40th time in their history.

Dhawal’s incredible performance in the 2012-13 season also included a five-wicket haul in the semi-final against Services, a match in which he had also scored a crucial 20 not out in the first inning. He backed up that performance once again by taking 9 wickets in the final against Saurashtra as Mumbai won the match by an innings and 125 runs.

After his amazing performance in Ranji Trophy, Dhawal was selected for the quadrangular series with India A. Dhawal did not disappoint in the series as India won the series.

Kulkarni was once again the leading wicket-taker for Mumbai in the 2017-18 Ranji Season with 21 wickets to his name.

The first time Dhawal Kulkarni was selected in the Indian squad was way back in 2009 when he was named for the away tour against New Zealand. Unfortunately, he couldn’t get a chance to make his debut in the series.

After his contribution in India A quadrangular series win and the 2012-13 Ranji Season, Dhawal was given an opportunity to make his debut in the overseas ODI series against England. He later made his T20I debut in 2016 playing against Zimbabwe in Harare.

With India’s pace attack getting stronger as we move forward, it becomes hard for Dhawal with his comparatively slow average speed in the range of 130s to play for India at the International level. Having said that, Dhawal has always delivered when given the chance.

Dhawal Kulkarni has played for three sides in the Indian Premier League until now. He began his IPL career playing for the Mumbai Indians in 2008 and played for them for six years until he was released in 2014.

Dhawal has delivered consistently in the IPL despite being in and out of the teams. He is usually given opportunities with seaming wickets due to his inability to generate swing and seam out of flat wickets and his lack of pace. The fact that his death bowling is not very effective is also a reason why teams do not play him consistently despite his experience.

He was picked for his base price of 75 lakhs in the 2020 auction by Mumbai Indians.