He invested 15 years of his life to represent India in 339 international matches and  scored over 170 goals to become India’s hockey tornado, Dhanraj Pillay. He was born in a humble Tamilian family from Pune and showed dedication for the game at a very young age. Sometimes, he used to play with a broken stick and there was nothing which led down his passion for the game.

The magical Dhanraj Pillai is without a shatter of doubt the best forwards of hockey in the world. Dhanraj was and will be a remembered as a colorful and charismatic player. His game was timeless and the effort with which he pierced through the opposition defence is still remembered by hockey fans.

Dhanraj’s dribbling skills were so fast that he went past players even 10 years younger to him with ease. Most important of all, Pillay even after retirement has that passion, hunger and love for the game. Such is the charisma of this Punekar that his fan following cuts across even borders.

Though he was born in a poor family, that never stopped him from chasing his dreams. The support from his family was crucial during his struggling days. They saw the potential in the young boy who did wonders with a broken stick. Dhanraj idolized his brother Ramesh Pillai, who also played Hockey. His passion for the game was evident from the fact that he played by stiching together broken hockey sticks, s there was no money to buy a new one.

The turning point of his life came during the school selection team. As Dhanraj had shown a lot of promise from his early childhood, his dream became reality after getting selected to the Kirkee hockey school, in Pune. After this selection there was no looking back for this mercurial and shining star of Indian hockey. 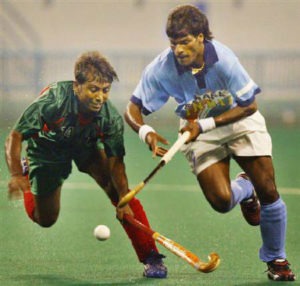 He got selected for Kirkee Hockey School with sheer hard work and support from his family and there was no looking back after that. Like a self driven athlete, he created history on the hockey pitch.

He was appointed as the captain of the Indian hockey team and led India to many victories. India won their three Asian Games under his captaincy in 1998, 2002 and 2003. And, Dhanraj became the player of the tournament at the 2002 Champions trophy. Pillay is the only Hockey player to have played in 4 Olympics,  4 World Cups,  4 Champions Trophies  and 4 Asian Games.

Dhanraj Pillay is a fighter to the core. He played hockey by piecing together broken hockey sticks and has often landed himself in tussles with the authorities. He used to speak about their inefficiency and arbitrary decisions. With hockey in his blood,  Pillay has many admirers and is currently the manager of the Indian hockey team. Pillay believes in strong team bonding and promotes team spirit. 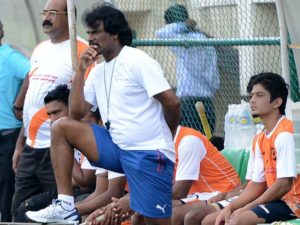 His hockey career spanned from December 1989 to August 2004 and was awarded the player of the tournament in 2002 Champions trophy. He was awarded India’s highest sporting honor, the Rajiv Gandhi Khel Ratna award for the year 1999-2000. And, Padma Shri, a civilian award in 2000.

Currently, he is a valuable member of the Indian Hockey Federation. Like Dhanraj Pillay, India has produced many legends. Learn about their short stories here.

KreedOn Network
We are a team of sports writers who research about sports in India day in day out. Please reach out to us in case of any specific requirement of digital services on [email protected] .
Previous article
Makhan Singh – The Forgetten Flying Sikh
Next article
Yousuf Khan – The Forgotten Indian Football Master lost in history

Hockey World Cup 2023: New Zealand script an epic comeback to knock India out of the WC

India vs Wales, Hockey World Cup 2023: India failed to directly qualify for the quarterfinals | To play NZ in crossover

FIH Men’s Hockey World Cup 2023: List of Winners in the History of the Competition