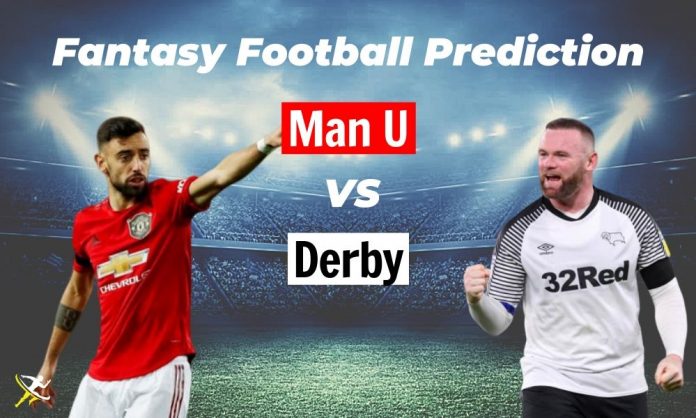 Derby will be hosting Manchester United at the Pride Park Stadium in the last 16 of the FA Cup. The Derby starting 11 will feature Manchester United’s all-time top scorer Wayne Rooney who will relish beating his former club, he said. These sides last met in the EFL Cup fixture of the 18-19 season, which was won by Derby County after a penalty shoot-out.

Going into the game against the mighty Manchester United, The Rams have won one of their last 5 games. A 3-1 victory over Sheffield Wednesday featured a brace from Tom Lawrence and a goal from Jason Knight.

Against United, Derby will find it difficult to break down the defence that consists of the world’s most expensive defender, Harry Maguire. It will be a magical moment if Wayne Rooney scores a goal against his former club. Wayne said in a statement before the fixture that for those 90-120 minutes he would want Derby to win and progress to the next round and will not hesitate in celebrating if he scores against United.

The Red Devils are unbeaten in their last 8 games in all competitions. The unbeaten run consists of 3 draws, wins over Manchester City and Chelsea and a 6-0 win over Tranmere Rovers in the 4th round of the FA Cup, which was the first time they scored 6 goals after Sir Alex Fergusson’s retirement.

United will absorb all the pressure Derby throws at them and should come out on top of the fixture with a 3-1 or a 4-1 victory.

David De Gea will be rested for the game against Manchester City. Sergio Romero has claimed the starting 11 spot on the team sheet in FA Cup as he has been outstanding in the competition for United. The Argentinian has made 56 starts for United in all competitions and kept 36 clean sheets which is a tremendous stat.

Warad Bhat
Warad is passionate about brands, football, films and food. He enjoys reading about latest gadgets and technologies and spends his time either watching movies or cooking something new. Warad is a spiritual person who believes that to change the world you must change yourself from within.
Previous article“Karma is a …!” Fans react as India beat England to enter T20 WC Finals
Next articleSA vs AUS 3rd ODI Dream11 Prediction | South Africa vs Australia | Ballebaazi