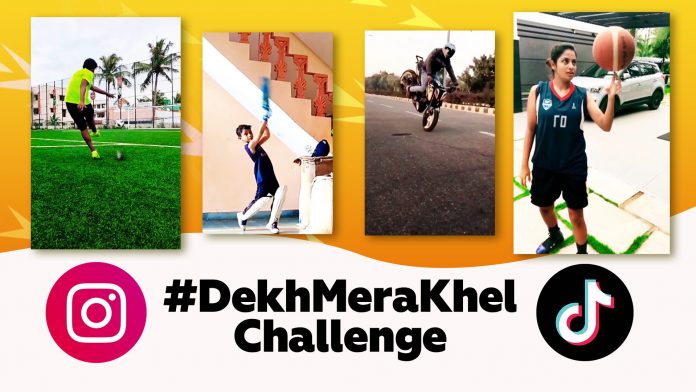 The Indian economy has almost six folds in size within the last 20 years. Although it’s growth has stagnated a bit in 2019, it is still the seventh-largest economy in the world and well on way to surpass developed European nations like France and the United Kingdom. But despite being home to over 1.3 billion (that’s 13 digits by the way!), one can hardly call India a sporting nation.

Experts cite the lack of development at the grass-root levels and an under-developed sports infrastructure as the major reasons for this situation. But that doesn’t mean we lack talent. These tweets clearly prove the case:

KreedOn’s #DekhMeraKhel campaign was launched to solve this exact problem. Its main aim is to bring forward the country’s unseen sporting talent. If we are able to do that, avenues will automatically open up for these budding athletes.

The talent of both Rameshwar Gurjar and the CartWheel kids got recognition from the Indian Sports Minister Kiren Rijiju who awarded them scholarships at the SAI facilities.

Rameshwar Gurjar's trial run was conducted at T T Nagar Stadium by senior coaches of SAI and State Govt. Here, Rameshwar is seen running at extreme left. He is exhausted due to the glare of publicity so couldn't perform well. Will give proper time and training to him. pic.twitter.com/RQtkxWFDFR

I'm happy that @nadiacomaneci10 tweeted it! As first gymnast who scored perfect 10.0 at the 1976 Montreal Olympics, and then, received six more perfect 10s to win three gold medals, it becomes very special. I've urged to introduce these kids to me. https://t.co/ahYVws8VCB

This again underlines the power that social media beholds. #DekhMeraKhel envisions to replicate a similar effect. The idea is to encourage people to post videos of themselves playing a sport.

This will not only encourage others to follow suit (thus bringing out India’s best talent) but will also help in the promotion of the sport and a healthy lifestyle on the whole.

How to show your game?

Participating in the #DekhMeraKhel is very simple. Users have to share their video while playing a sport on social media, preferably Instagram or TikTok, along with the hashtag #DekhMeraKhel. Moreover, you have to also tag three of your friends who will do the challenge.

#DekhMeraKhel Challenge⠀ ⠀ We are proud to announce #DekhMeraKhel Challenge to everyone who loves sports!⠀ What is this challenge all about?⠀ This challenge is about showcasing your talent online. We want people to be proud of their sporting talent that goes beyond caste, status or any other social barriers.⠀ What you have to do?⠀ ⠀ -You will post a video of yourself showing your favourite move, action or trick of a sport.⠀ -You will tag 3 of your friends and nominate them to do the same.⠀ -Use the hashtag #DekhMeraKhel⠀ -mention our handle @kreedonworld⠀ ⠀ Best clips will be featured on KreedOn's page every week!⠀ We nominate @popefeed @rahulvvyas @a.reckless.soul

You can be innovative with your videos and use new techniques to show the sporty side of yours.

You can use this template as it is to upload your post:

Why should you participate?

The #DekhMeraKhel challenge is an ideal platform to show off your hidden sporting skills to a like-minded community. Every week, the best videos will be chosen and will get featured on KreedOn’s social media channels in the form of a curated video.

Moreover, with the campaign, KreedOn aims at having the best, unseen grass-root talents under a single roof.

While the Cartwheel kids and Rameshwar Gurjar were lucky enough to turn the eyeballs of the country’s sports minister and three-time Olympic gold medalist, the same may not happen in your case. As a sportsperson, the #DekhMeraKhel might work wonders for you with a strong chance of getting recognized by who’s who of Indian sports.

So what are you waiting for?! We have ample sporting talent in every nook and corner of our country, right from the rustic backdrop of the villages to the bylanes of metropolitan areas. Let’s do our bit and spread the #DekhMeraKhel challenge for the betterment of sports in India!

Here are some of the best #DekhMeraKhel posts so far:

I am taking the #DekhMeraKhel (See my game) challenge initiated by @kreedonworld to spread sports and talent in 🇮🇳. We never had more than 30 mins of sports in a week while we were in school,so let's hope sports get recognized in our schools and we thrive to create more champions from our country 🏆! I would also like to nominate @farmanmkhan , @dahsra96 , @abhijeet1810 for the challenge. P.S keep the comments PG pls 🙏🏽😂😅 What is #DekhMeraKhel challenge?⠀ -Post a video of yourself showing your favourite move, action or trick of a sport.⠀ -Tag 3 of your friends and nominate them to do the same.⠀ -Use the hashtag #DekhMeraKhel⠀ -Mention KreedOn's handle @kreedonworld ⠀ Filmed on @oneplus @oneplus_india #shotononeplus

KreedOn Network
We are a team of sports writers who research about sports in India day in day out. Please reach out to us in case of any specific requirement of digital services on [email protected] .
Previous articleNorthEast United FC vs Jamshedpur FC Dream11 Prediction For Today’s Match | NEUFC vs JFC Dream11 Prediction | Fantasy Football Tips
Next articleBCCI announces Indian squad for U-19 World Cup 2020

The Esports Federation of India (ESFI) and ConnectIN Esports have entered into an agreement to organize the "Esports India Business Conference (EIBC) in association...
Read more
Press Release

“Mumbai Games season 2 is going to be huge”: This is why…

Mumbai is a weird place to be in. After all, in which city would you find contradictory features like Asia’s biggest slum coexist with the...
Read more
Press Release

The Food Corporation of India hosted an evening in association with Marketing Partner Sports Oodles Pvt Ltd to declare the trophy for All India...
Read more

Fans on Twitter Beats the Drum Around Chhetri as he Overtakes...