Day 9 of the 21st Commonwealth Games will go down as one of the best days for Indian Sports. Indian athletes overall won 11 medals that include 3 Gold, 4 Silver and 4 Bronze medals. Here’s Gold Coast Games report on Day 9.

Indian shooters are on a roll at the 21st Commonwealth Games as Tejaswini Sawant and Anjum Moudgil further signaled India’s dominance by landing gold and silver respectively in the finals of Women’s 50m Rifle 3 position. 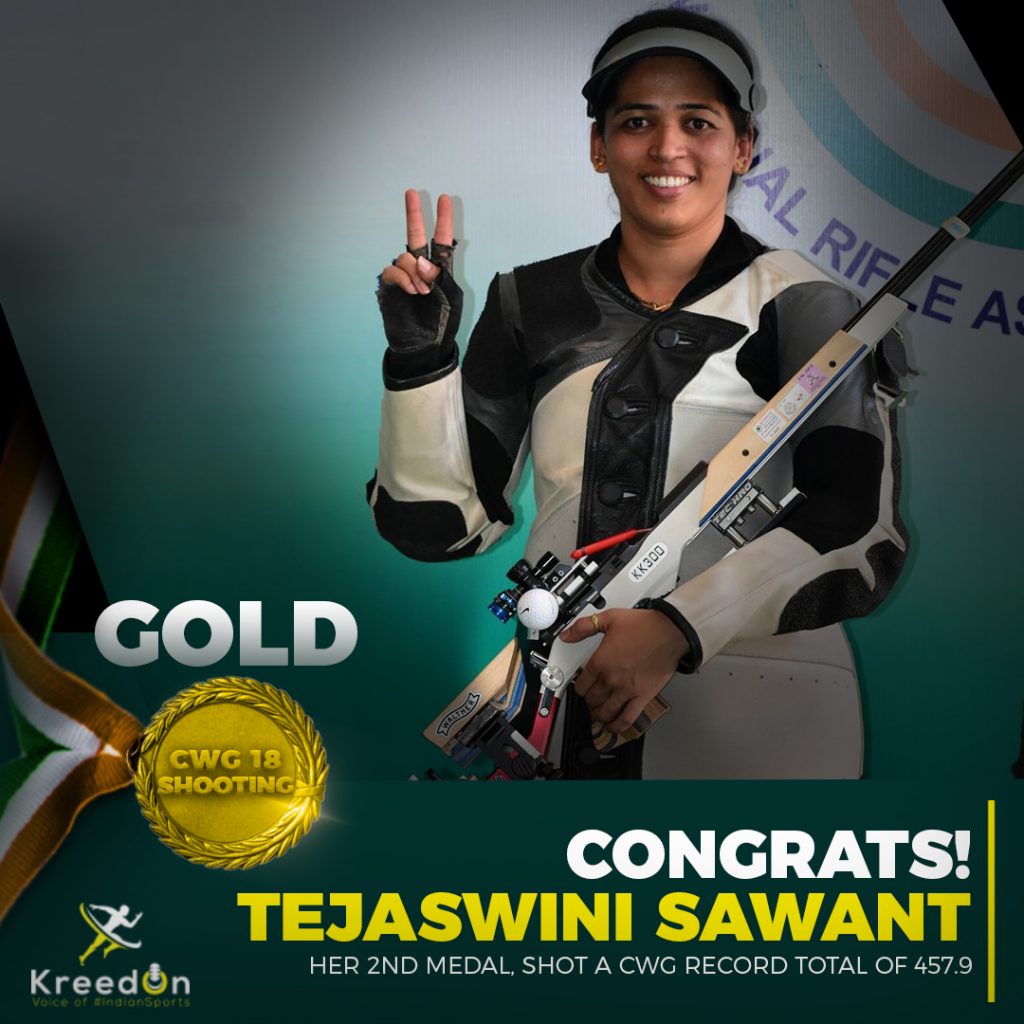 Also, Tejaswini broke a Commonwealth Games record with a best score of 457.9. 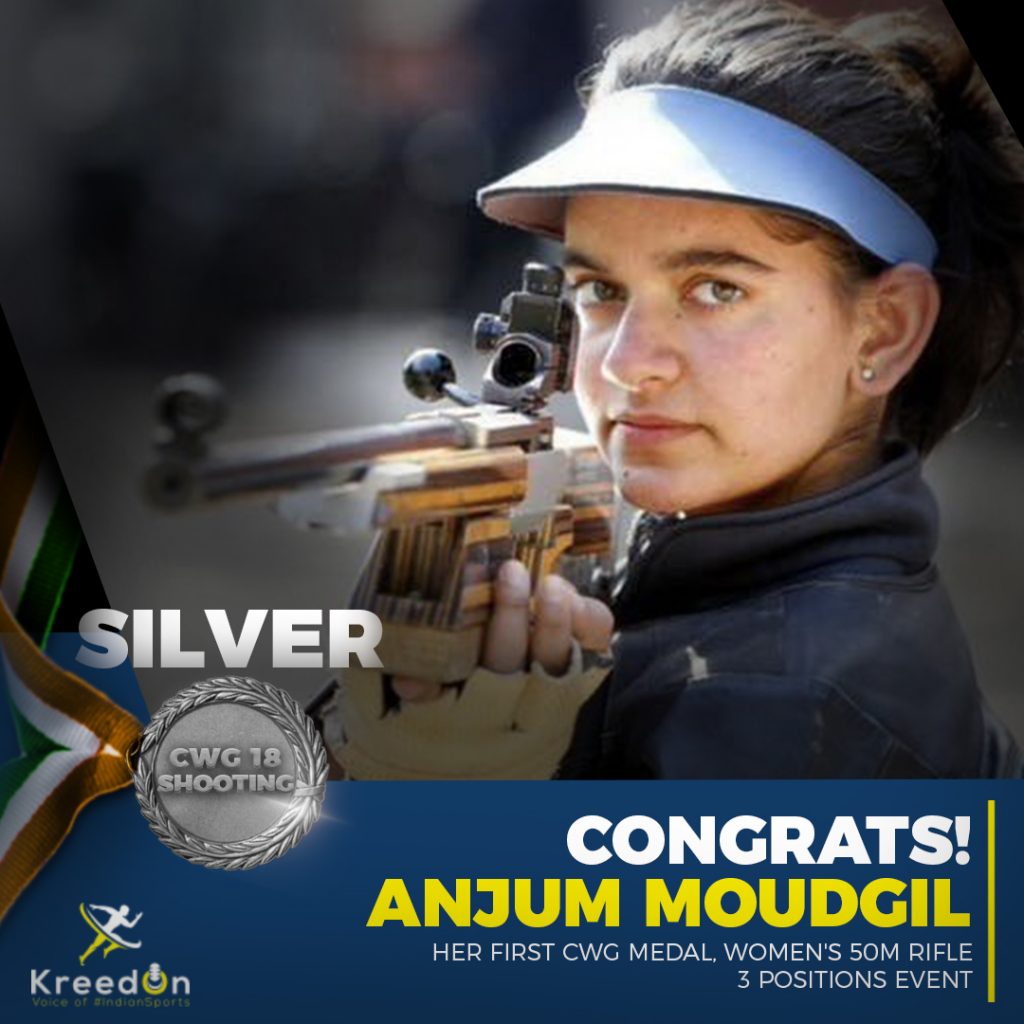 On the other hand, Anjum finished second with a score of 455.7.

Scotland’s Seonaid Mcintosh settled for a bronze medal after posting a score of 444.6.

This is India’s sixth gold medal in shooting (and more to come). So far, it has won five silver and five bronze with a total of 16 medals in the discipline alone.

Indian shooters continued to bring laurels even on the ninth day of the ongoing 21st Commonwealth Games, with 15-year-old Anish Bhanwala handing the country 16th gold at the Belmont Shooting Centre. 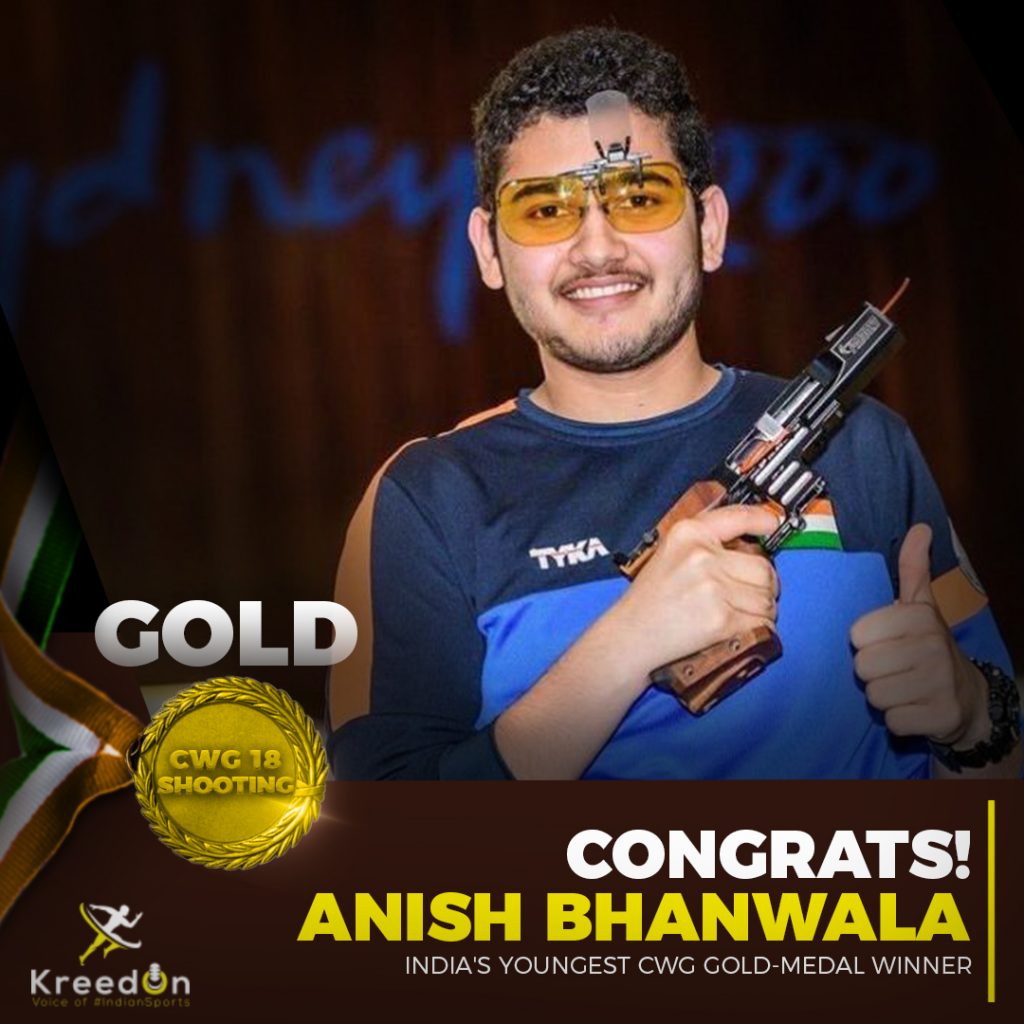 The young Indian athlete lad broke the Commonwealth Games record with a score of 30 to win the final and became the youngest athlete of the country to bag the gold at the prestigious quadrennial event.

Anish finished two points ahead of Australia’s Sergei Evglevski, who posted a score of 28 to take the silver medal. While, Sam Gowin of England settled for bronze after posting 17 points.

Neeraj Kumar, the other Indian in fray, slipped as the finals progressed and finished at the fourth spot with a score of 15.Earlier, he made a second-place finish during stage two of qualification with 579-14x.

Earlier in the day, India’s Tejaswini Sawant scooped up a gold medal after shooting a CWG record total of 457.9 in the finals of the women’s 50m Rifle 3 event for her second medal at the ongoing Games.

India secured their first boxing medal in the ongoing XXI Gold Coast Games, with Naman Tanwar settling for bronze in the men’s 91kg category at the Oxenford Studios. 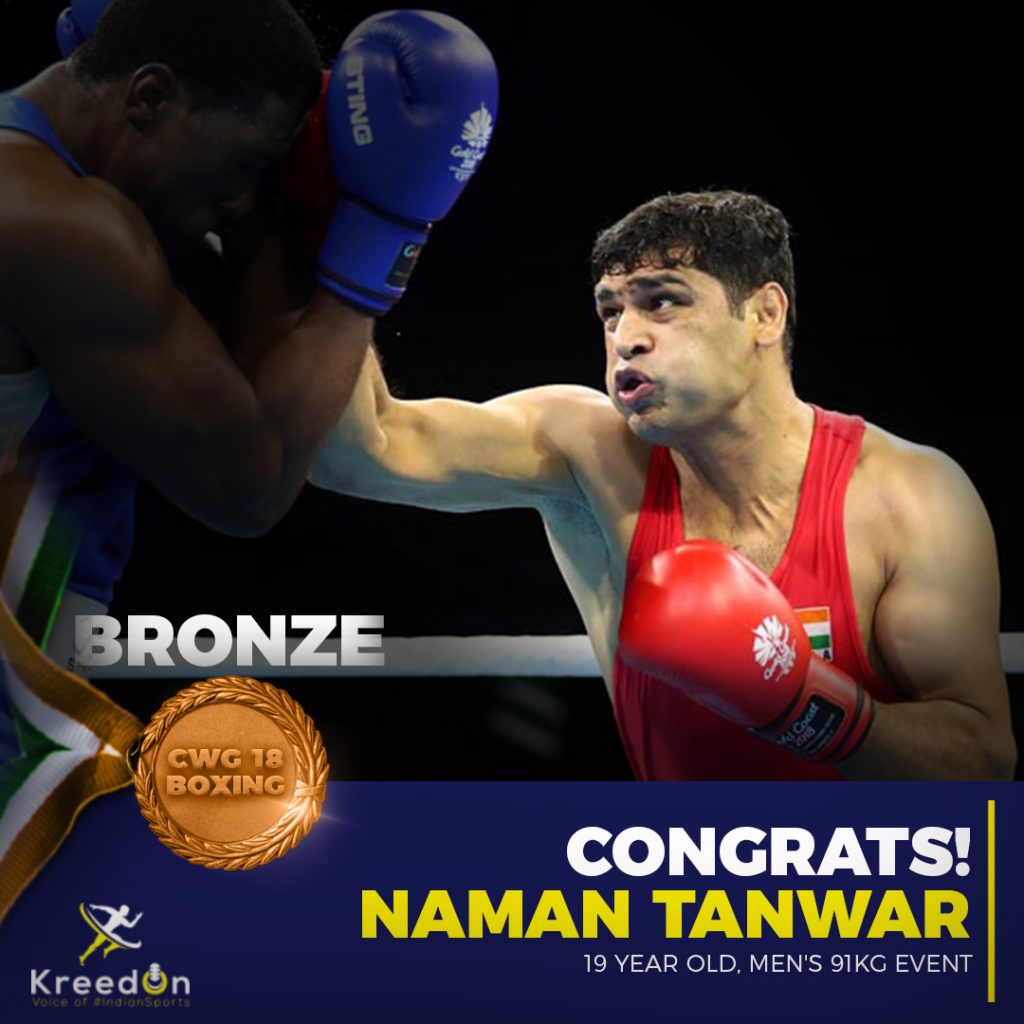 The 19-year-old grappler failed to replicate his good performance in the Games so far and slumped to a 0-4 defeat to Jason Whateley of Australia in the semi-final bout to settle for the bronze medal.

However, the Indian boxers are set to bring more medals to the country as Amit Panghal, Gaurav Solanki and Manish Kaushik have all qualified for the finals after winning the semi-final matches of their respective categories today.

While Amit outplayed Uganda’s Juma Miiro by a unanimous 5-0 verdict in the semi-finals of the men’s light flyweight (49 kg) category, Gaurav overcame a challenge from Sri Lanka’s Vidanalange Ishan Bandara in the last-four stage of the men’s flyweight (52kg) division.

Meanwhile, Kaushik also made it to the finals after sweeping aside James McGivern of Northern Ireland in the men’s lightweight (60kg) semi-finals. 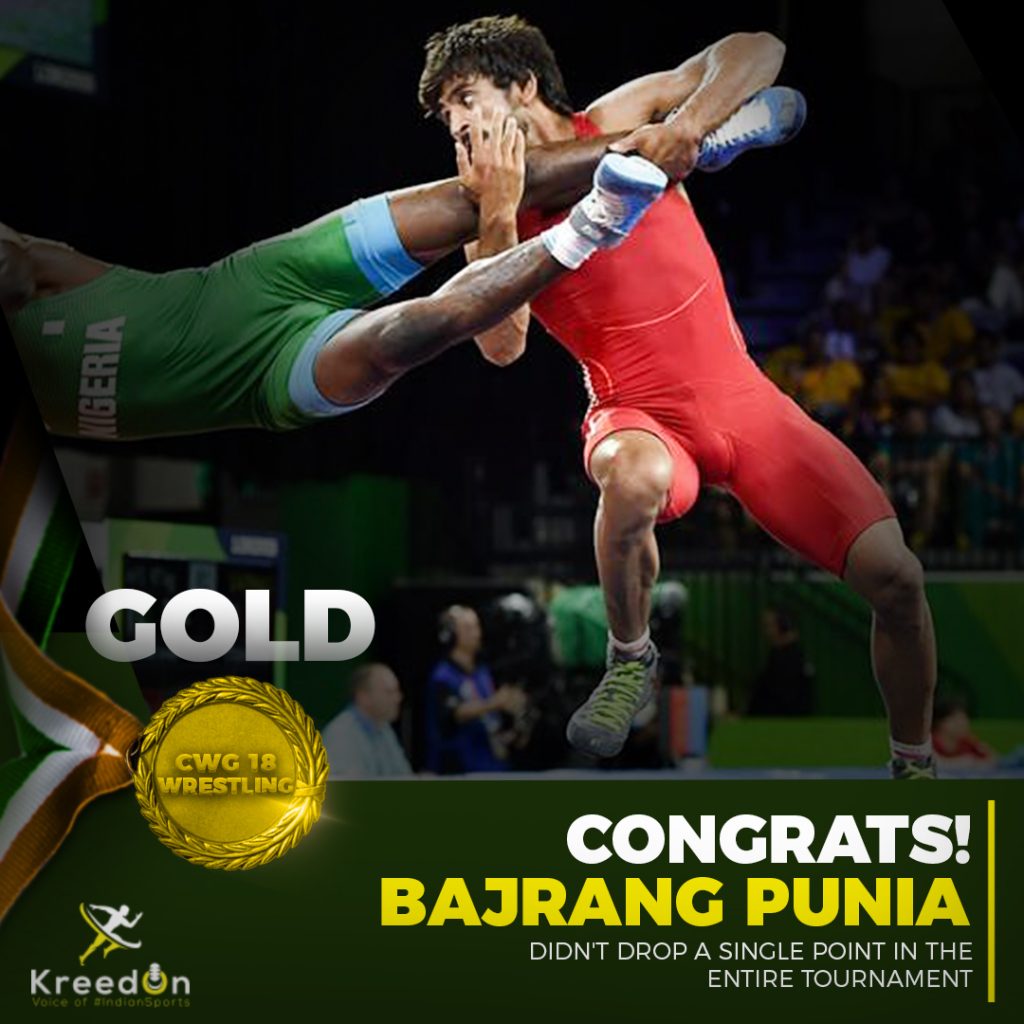 The 24-year-old showcased a superlative performance as he thrashed Wales’ Kane Charig by technical superiority in the summit showdown to clinch India’s 17th gold medal at the Games in style.

The final match saw Kane failing to notch a single point and Bajrang clinch ten points in a row to finish the bout in less than ten minutes. Bajrang, who is a World Championship bronze-medallist from 2013, had earlier bagged a silver medal in the 2014 Glasgow edition of the Games in the 61kg weight category. 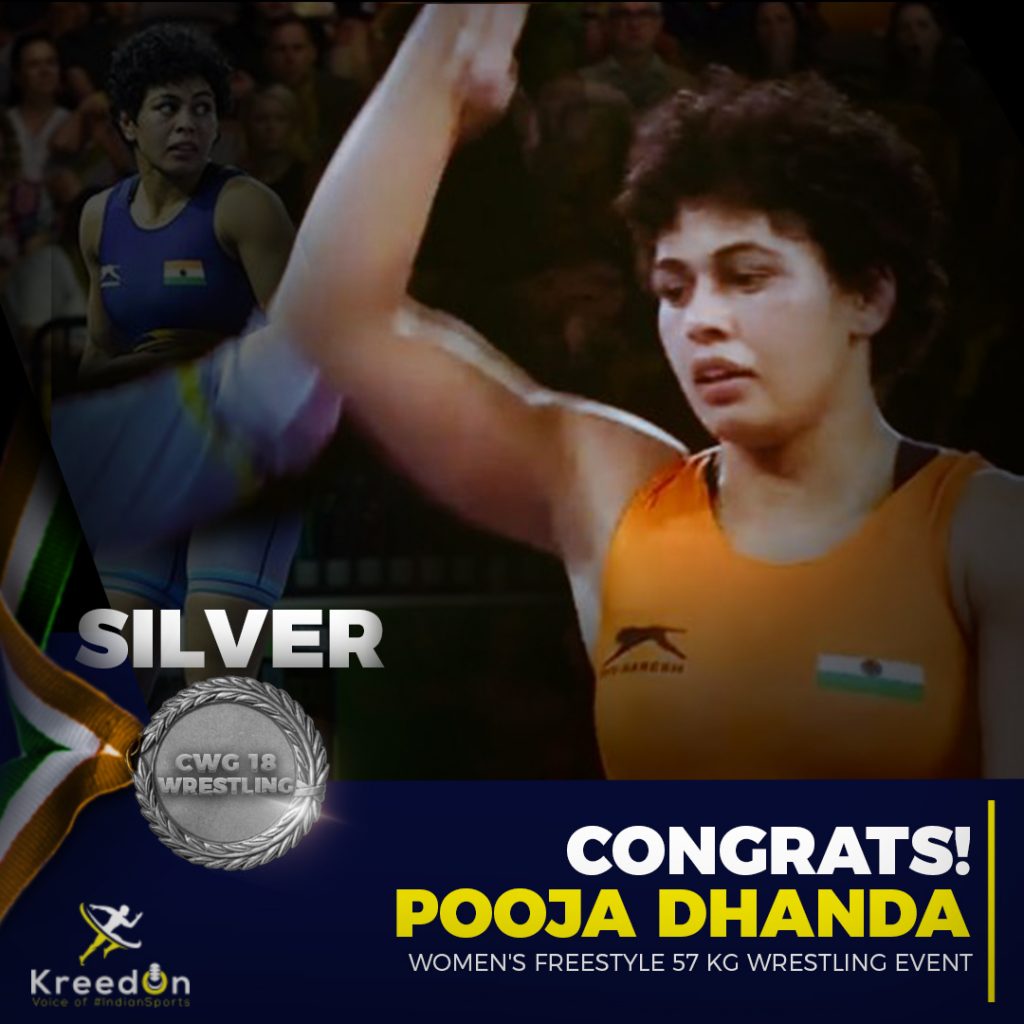 Meanwhile, Pooja Dhanda settled for a silver medal after slumping to a 5-7 defeat at the hands of Nigeria’s Odunayo Adekuoroye in the finals of the women’s 57 kg category. 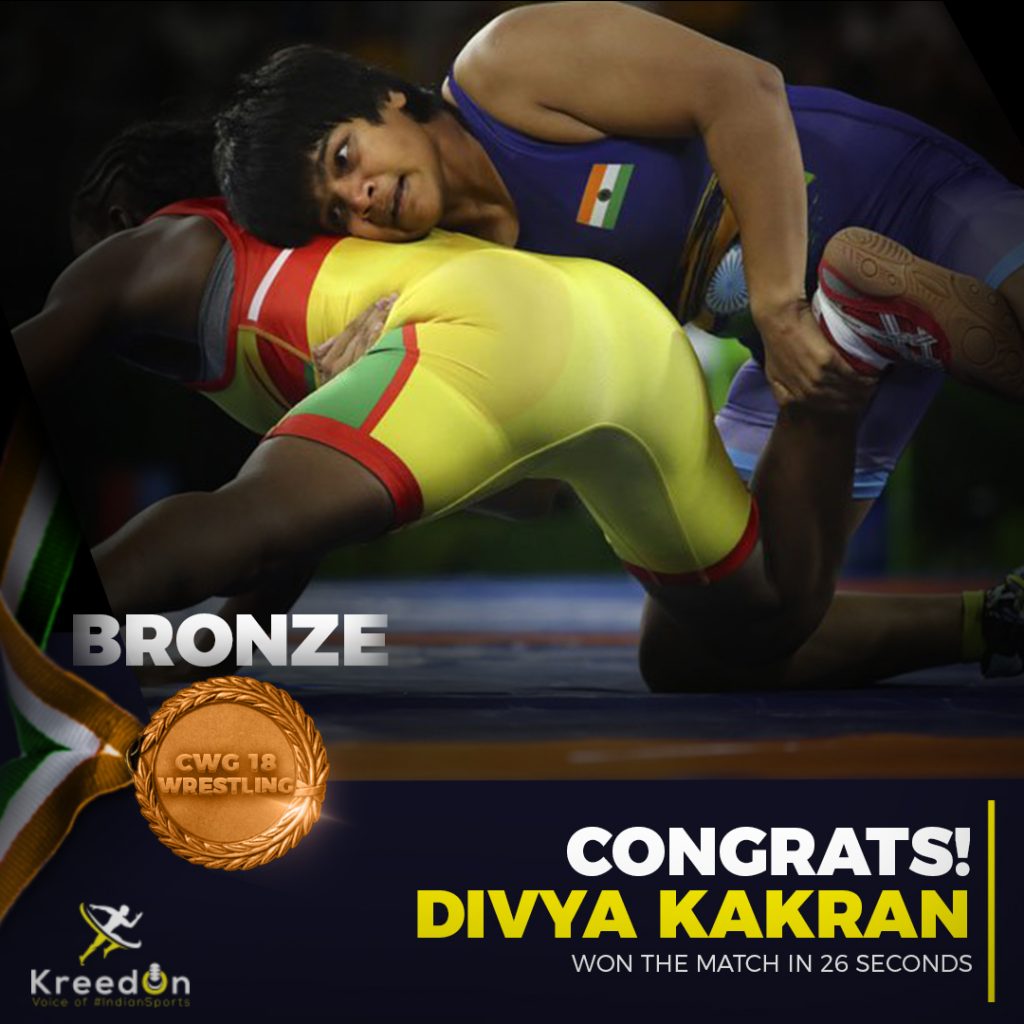 Divya Kakran, the other wrestler in the fray, added a bronze medal in India’s kitty by clinching the medal in women’s 68 kg freestyle.

Divya thrashed Sherin Sultana of Bangladesh 4-0 to come out victorious. 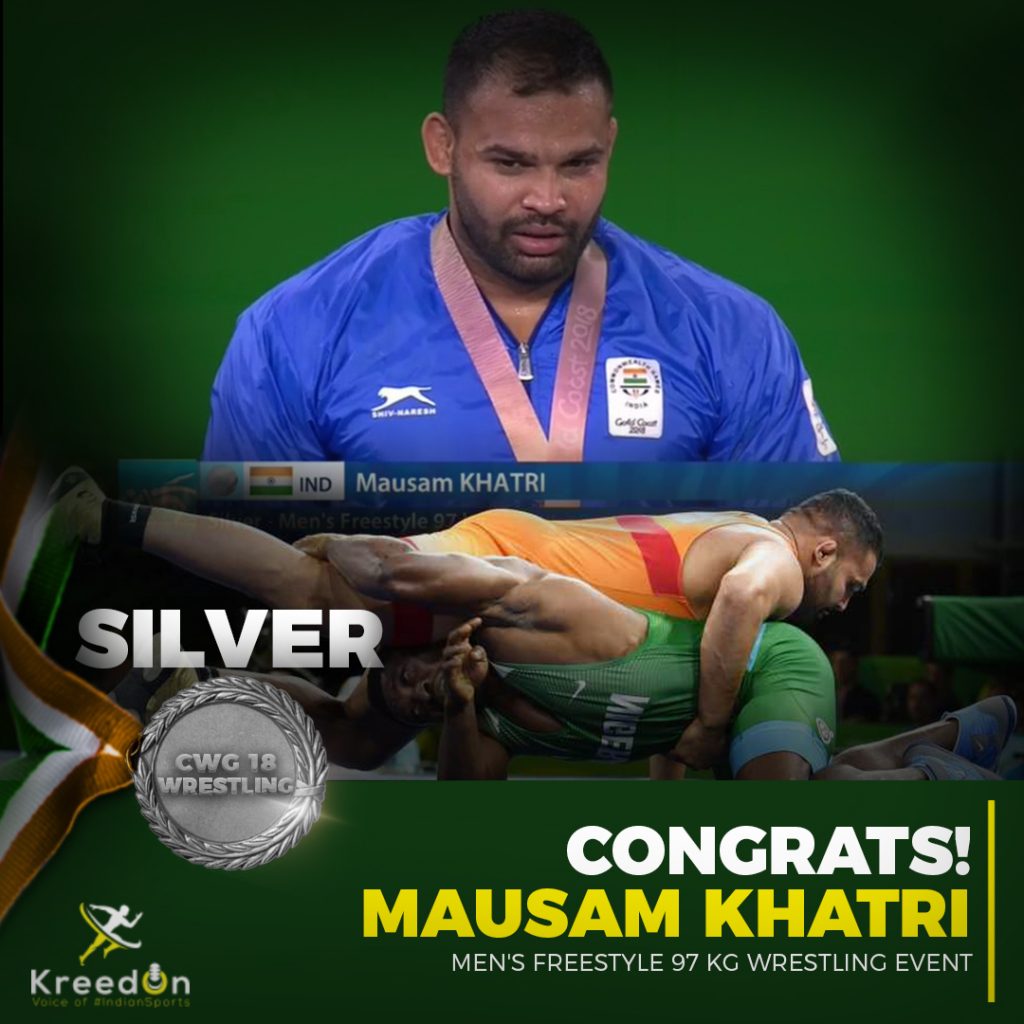 Indian wrestler Mausam Khatri settled for a silver medal after losing to Martin Erasmus of South Africa in the final bout of the men’s freestyle 97 kg event.

The 27-year-old from Haryana failed to outplay Erasmus and suffered a 2-12 defeat in the match by technical superiority to finish second at the Carrara Sports Arena.

Khatri, a bronze-medallist in the 2010 Asian Games, had earlier bagged the Commonwealth Championship twice — in 2009 and 2011. 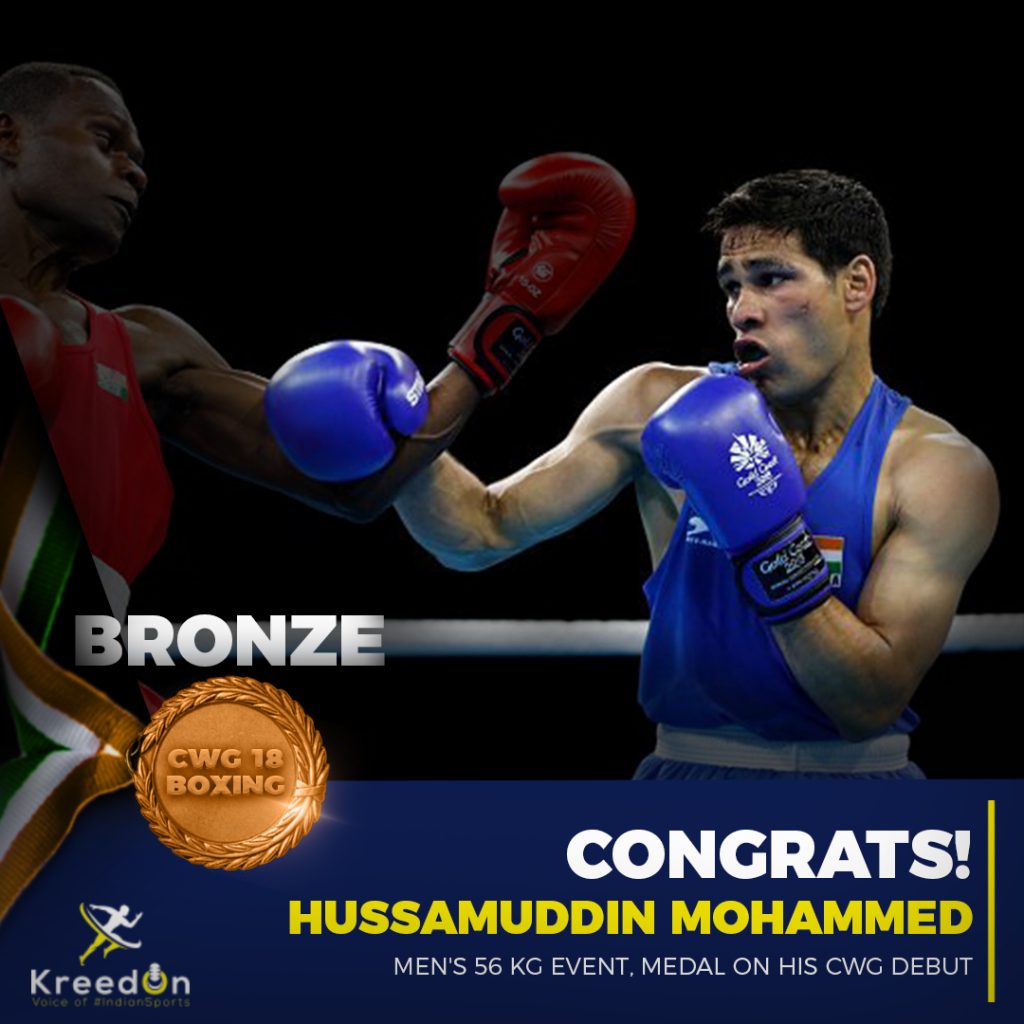 Elsewhere on the ninth day of the game, England’s Peter McGrail defeated India’s Hussamuddin Mohammed 5-0 in the semi-final of the men’s 56kg boxing category. 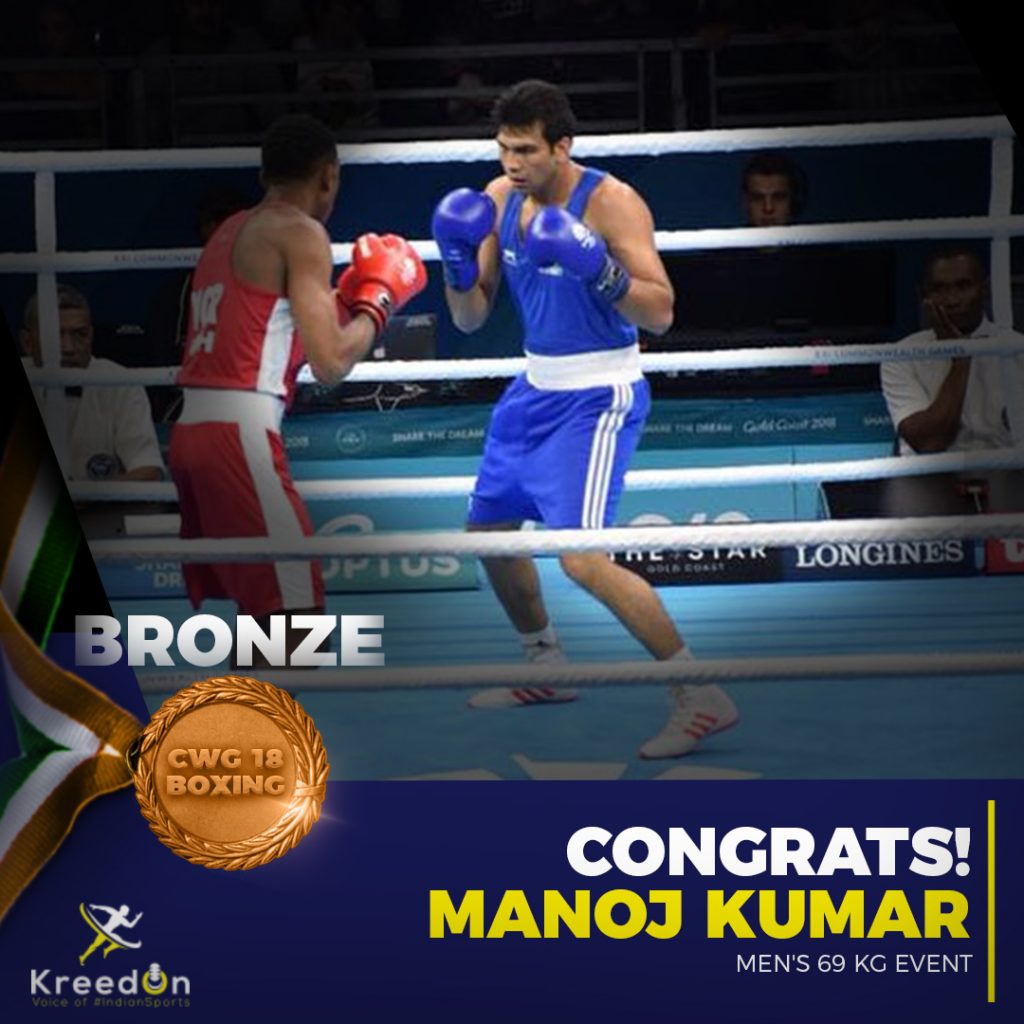 On the other hand, Hussamuddin’s compatriot Manoj Kumar had to settle for a bronze as well after losing to another Englishman, Pat McCormack, in the 69kg semis. 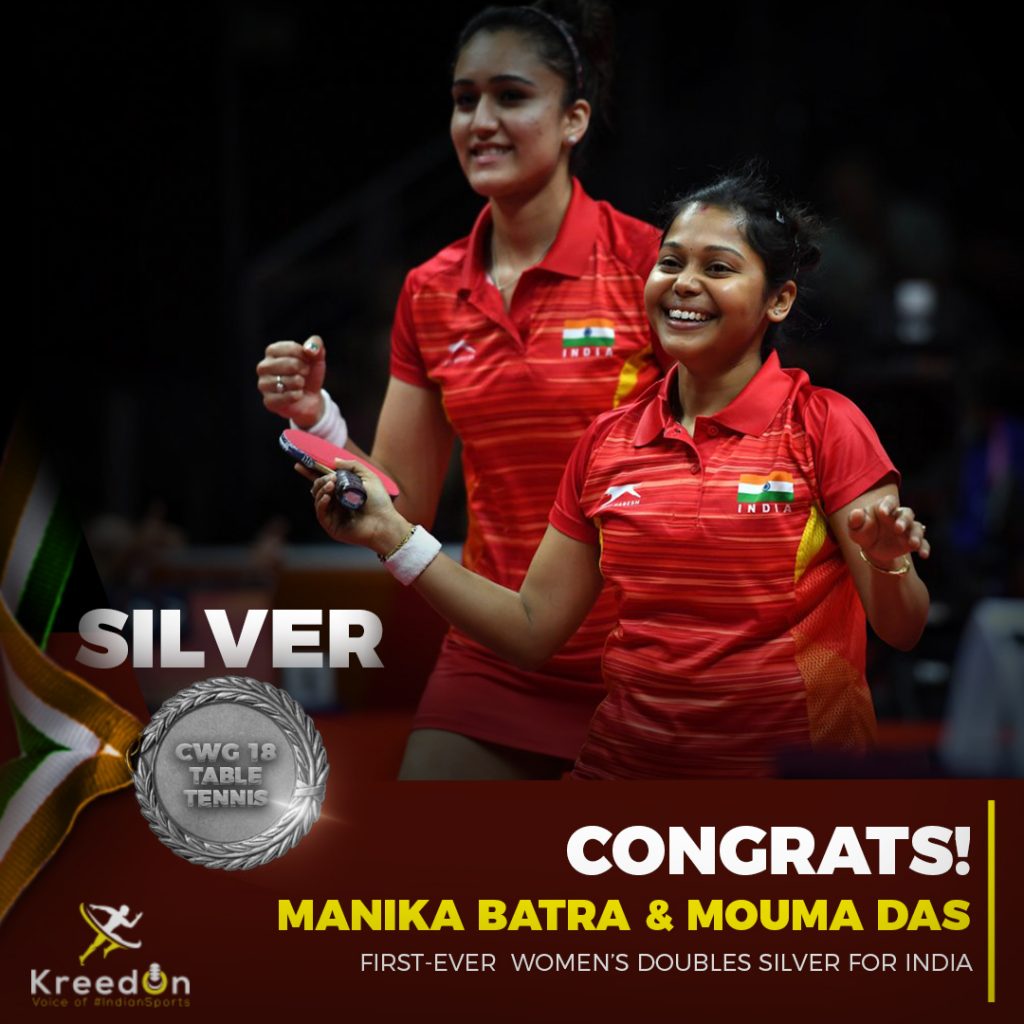 Batra and Das lose to the Singapore team of Feng Tianwei and Yu Mengyu 5-11, 4-11, 5-11 in a summit showdown clash of the event to pick the medal.

Vardan Pandhare
Vardhan is an author who loves creativity. He enjoys experimenting in various fields. After completing his graduation, he was sure about one thing! His love for sports. He is now living his dream of being creative with words in the field of sports. He has since then always brought the latest news and updates for all the sports fans.
Previous article
Day 8 – CWG 2018 – The Best day so far for India!!
Next article
Winning Medals for India means a lot: Heena Sidhu

Reisangmei Vashum owns a club, sets off on a noble mission to groom kids – KreedOn Candids