Day 7 was an outing of mixed emotions for the Indian athletes as we won a few and lost a few medal winning opportunities. Here is a detailed report of the events in our Gold Coast Games Highlights.

The 26-year-old secured the top honors after edging past Emma Cox of Australia in a shoot-off with a score of 96+ 2. The two opponents were tied on 96 before the Indian shot one more to claim the gold. 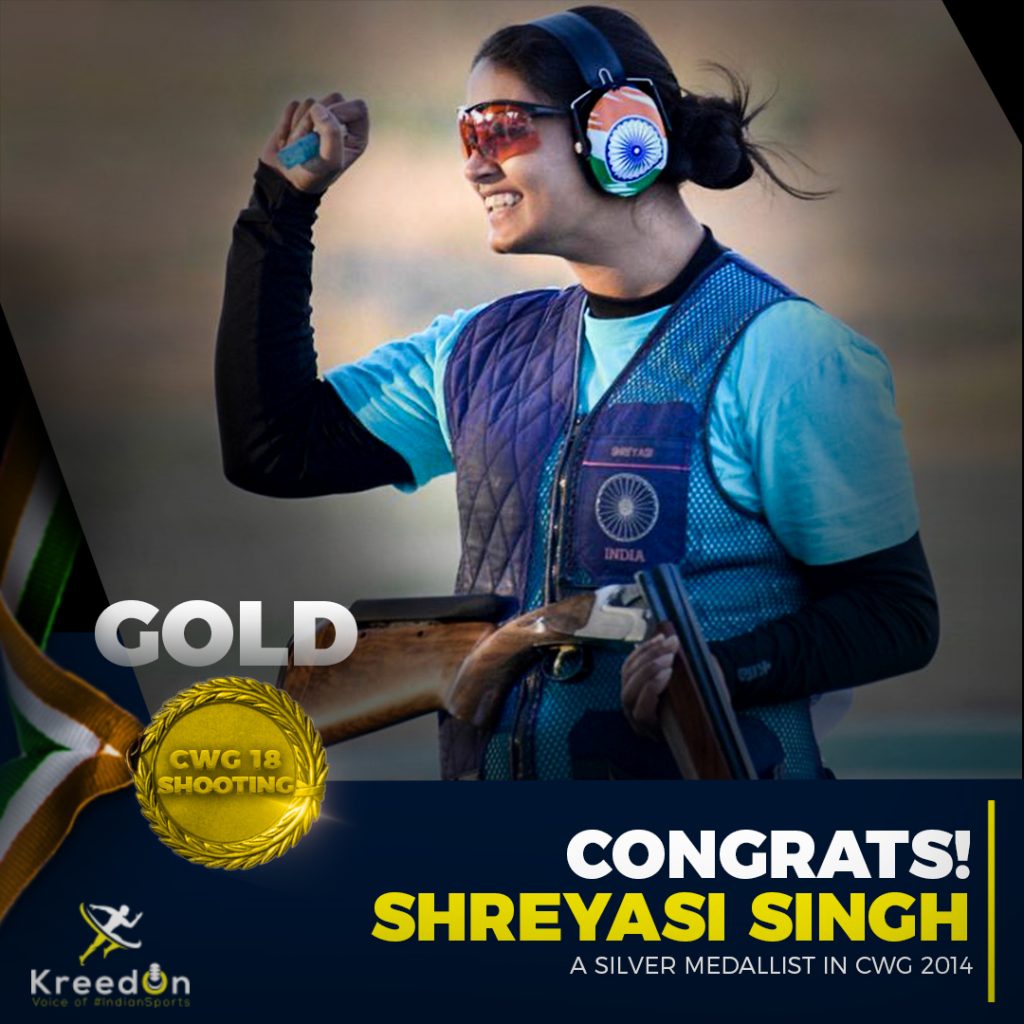 Meanwhile, Linda Pearson of Scotland settled for a bronze medal after a total of 87.

Varsha Varman, the other Indian in the fray, narrowly missed out on a bronze as she finished fourth after shooting 86 (21+25+21+19) across the four series.

This was India’s 12th Gold at the Gold Coast Games, and fans should expect many more to come.

Indian shooters continued their medal rush at the ongoing 21st Commonwealth Games on Day 7 with Om Prakash Mitharval settling for the bronze medal in the men’s 50m pistol event.

Mitharval, earlier also picked up the bronze in the men’s 10m air pistol final, registered a score of 201.1 to finish at the third spot of the men’s 50m pistol event. 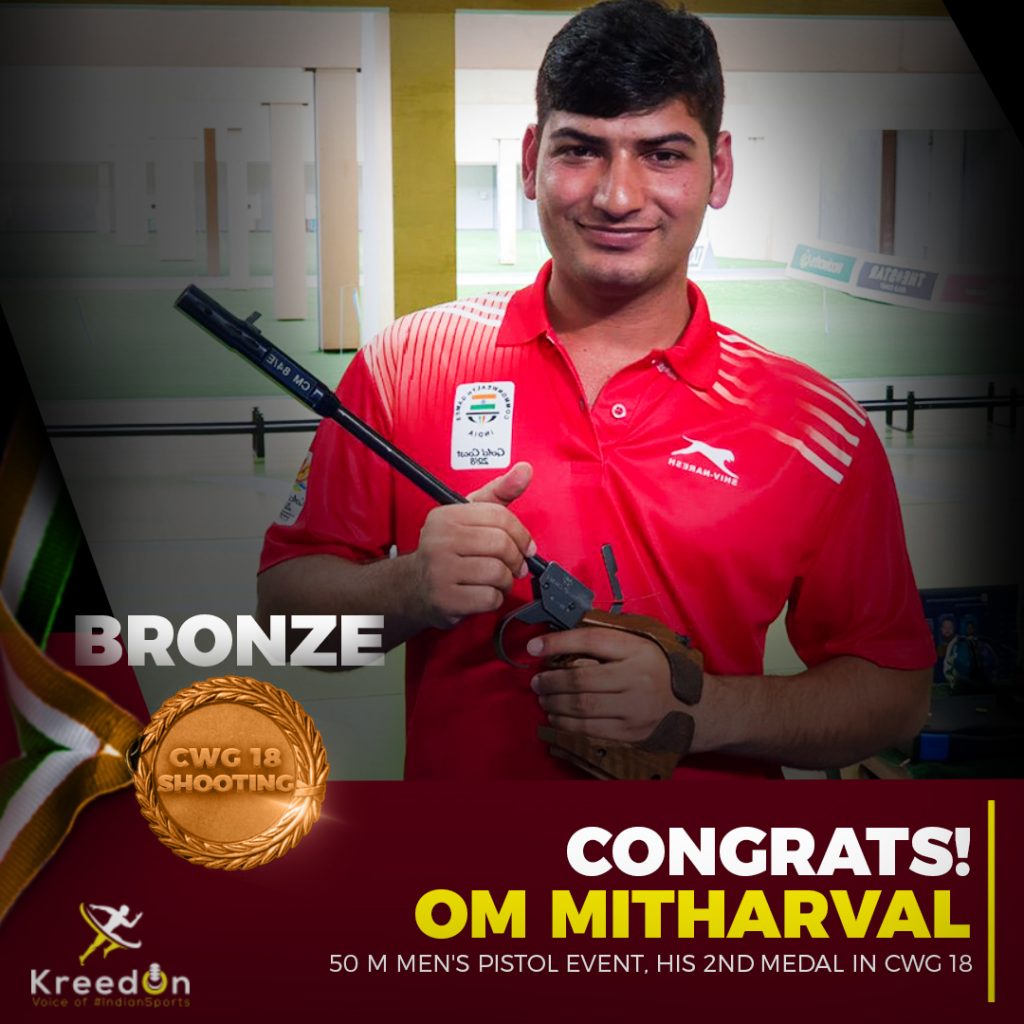 While Daniel Repacholi of Australia won the gold medal with a new Commonwealth Games record of 227.2, the silver medal went to Bangladesh’s Shakil Ahmed after firing a total of 220.5.

Defending champion Jitu Rai, the other Indian in the fray, failed to add to his gold that he had won in men’s 10m air pistol event as he posted a decidedly below score of 105, to finish at the bottom of the eight-man final.

Shooter Ankur Mittal added another medal to India’s kitty as he won a bronze in the men’s double trap finals on the seventh day of the ongoing XXI Gold Coast Games in Australia. The 26-year-old finished on the third spot after posting a score of 53 in the finals at Belmont Shooting Centre.

David Mcmath took the gold with a score of 74 while the silver went to Tim Kneale of Isle of Man. Mittal, who picked silver medal in the World Championships in Moscow last year besides bagging a silver and gold in the ISSF World Cups, had earlier finished fifth with a score of 133 in the qualifying to make it to the finals.

Asab Mohammed, the other Indian in the fray, was eliminated after he shot 43 out of 50 in the finals of the men’s double trap.

It was India’s second bronze and the third medal of the day after shooter Om Prakash Mitharval bagged his second bronze medal in the men’s 50m pistol event of the prestigious quadrennial event.

India’s tally at the Games has now increased to a total of 24 (and counting), including 12 gold, four silver and eight bronze.

2012 Olympic bronze-medallist Saina Nehwal stormed into the last-16 of the ongoing XXI Gold Coast Games after thrashing Elsie De Villiers of South Africa in straight-games in the women’s singles clash at the Carrara Sports Arena.

Nehwal proved too superior for her South African opponent as she posted comfortable 21-3, 21-1 win in a one-sided round-of-32 that lasted just 18 minutes.

She will next take on Jessica LI of Isle of Man for a place in the quarter-finals.

In another women’s singles clash, 2016 Rio Olympic silver-medallist PV Sindhu produced a rich vein of form as she outplayed Fiji’s Andra Whiteside 21-6, 21-3 in just 18 minutes to make it to the next round.

Elsewhere, Kidambi Srikanth also stormed into the pre-quarterfinals of the men’s singles event after brushing aside Aatish Lubah of Mauritius 21-13, 21-10 in a match that lasted 26 minutes.

Srikanth will now lock horns with Niluka Karunaratne of Sri Lanka for the last-eight spot.

The 19-year-old national record holder Tejaswin Shankar could not clear 2.27m in three attempts to be out of contention for a podium finish. The Delhi athlete had leaped 2.28m while winning the gold in the Federation Cup National Championships last month, but on on Day 7 of the Gold Coast Games he was not in his element.

Tejaswin started with 2.18m which he cleared in his second attempt and sailed the 2.21m-high bar comfortably. He then cleared 2.24m in his first attempt but stuck at 2.27m to the disappointment of the Indian athletics contingent.

“This is the first time I started with 2.18. Generally I start with 2.10 but then now I know that I have to practice at higher heights. That’s how it works in finals. 2.18 looked really good and I thought I was doing really well,” Tejaswin, who now trains in USA, said after his event.

“Trying to clear 2.27m, somewhere I lost the rhythm. The first two attempts were really bad but then I tried to put everything together for the last attempt but it didn’t work out. It wasn’t my day.”

He said he will have to clear 2.30m to have any chance of winning a medal in such competitions.

“I am pretty sure that I will do that (clearing 2.30m) this year. The biggest positive is I could hold my nerve against these big competitors — the Olympic and Commonwealth medallists. I realised they are people like me, they are not gods.”

In the women’s 400m finals, Hima Das ran yet another personal best of 51.32 seconds but that was enough for a sixth-place finish. The 18-year-old Indian had clocked 51.53 seconds, her personal best before today, in the semifinals yesterday.

Hima clocked the same time as fifth place Maximilla Imali of Kenya but the Indian had to settle for sixth-place finish in a photo finish.

Botswana’s Amantle Montsho took the gold in 50.14 seconds, while the Jamaican duo of Anastasia Le-Roy (50.57) and Stephenie McPherson (50.93) took the other two medals.

In the women’s long jump, Nayana James and Neena Varakil made it to the finals after finishing ninth and 12th respectively in the qualification round.

Nayana cleared 6.34m in her second attempt to finish fourth in Group B while Neena had a best effort of 6.24 to end at sixth in Group A.

Those who clear 6.60m or at least 12 best performers advance to the final. In the qualification round, only four competitors got past 6.60m.

The 2015 World Championships silver medallist Shara Proctor of England qualified for the finals on the top of the heap with a best effort of 6.89m while current world season leader Christabel Nettey of Canada was second with 6.79m.

Elsewhere on the seventh day of the Games, star boxer MC Mary Kom defeated veteran Sri Lankan Anusha Dilrukshi in an unanimous 5-0 verdict to book her place in the the final of the women’s 48 kilogram category.

Meanwhile, Indian experienced boxer Sarita Devi slumped to a 0-5 loss to Australia’s Anja Stridsman in the quarter-finals of the women’s 60kg category.

On the other hand, Dipika Pallikal and Joshna Chinappa defeated the Welsh team of Evans and Saffery 2-1 in the women’s squad doubles Pool C match.

India are currently standing at the third spot in the Games with a total of 24 medals, including 12 gold, four silver and eight bronze.

Vardan Pandhare
Vardhan is an author who loves creativity. He enjoys experimenting in various fields. After completing his graduation, he was sure about one thing! His love for sports. He is now living his dream of being creative with words in the field of sports. He has since then always brought the latest news and updates for all the sports fans.
Previous article
Day 6 – Gold Coast Games Recap – India surge in the medals tally
Next article
Day 8 – CWG 2018 – The Best day so far for India!!