This young boy became the first Athletics Gold medallist for India after 58 years at the Commonwealth Games 2018. Neeraj Chopra  who was born for this would have imagined the kind of reception, in his dreams, as he got from the Indian sports fans. But is it enough for him?

The answer is straight no, as the latest sports sensation has put the 2018 CWG victory behind him as his next target is the Diamond league final in Doha starting from 30th of August.  But the schedules may clash with the Asiads and he may find himself in a fix.   India is sending a 524-member group of athletes featuring 277 men and 247 women over a total of 36 sports disciplines from all over the country, to participate in Jakarta at the Asian Games 2018.

India’s only track and field gold medallist at the Commonwealth Games 2018 Neeraj Chopra returned from Gold Coast with the rest of his athletics teammates to a warm reception in Delhi.

Except for silver-medallist Seema Punia, who returned home two days ago, the entire athletics team landed in Delhi airport late last night and were greeted by a sea of people.

More than 100 people gathered at the Delhi airport to receive the athletes. Officials of the Athletics Federation of India, Sports Ministry and Sports Authority of India and senior Army officers were also present. 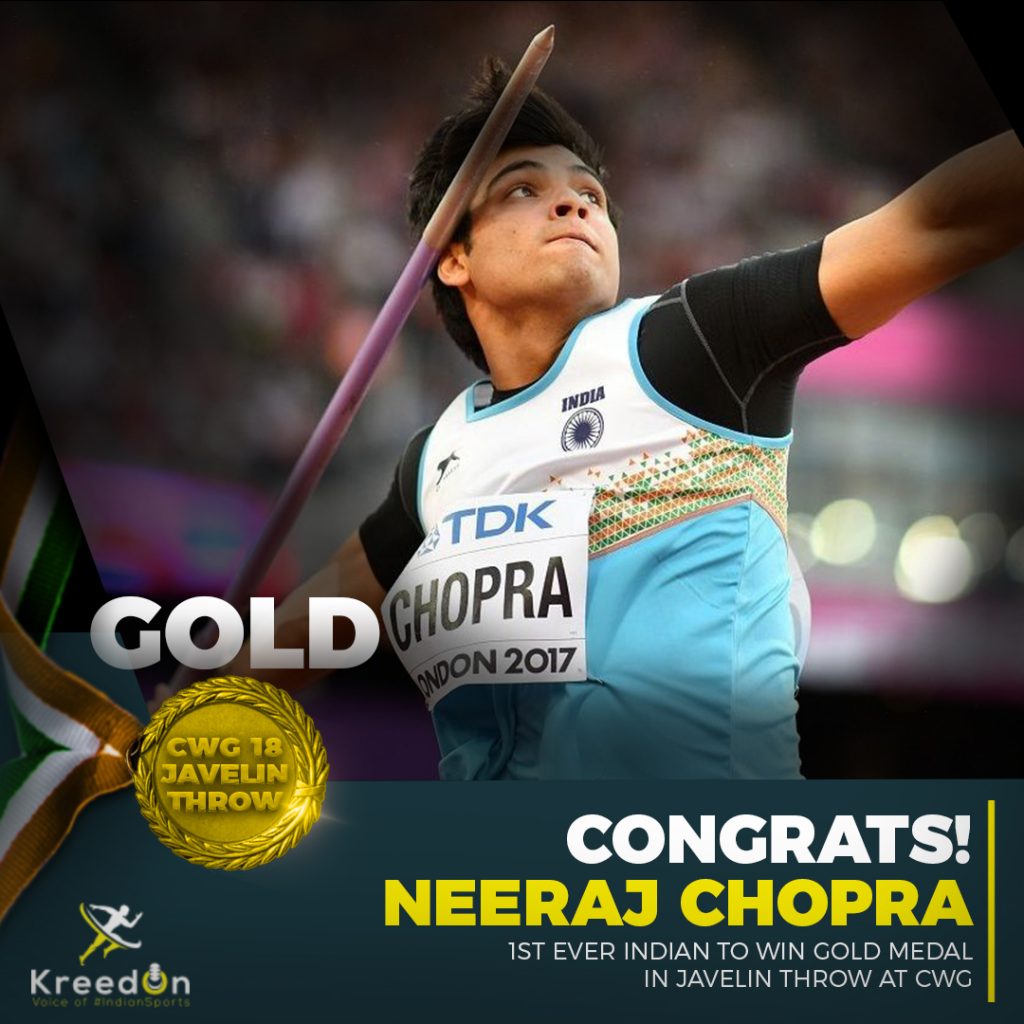 Relatives and people from Neeraj’s village in Haryana came to receive him. Officers of the Indian Army, where Neeraj is a junior commissioned officer, were also there to welcome him.

Neeraj was overwhelmed seeing so many people coming to receive him and said “it was a great feeling.”

“A lot of people came to receive us at the airport. It was a great feeling to see so many people coming to receive me and my teammates. My uncle was there along with the officials from  SAI and ministry as well as from my army unit,” a happy , Neeraj said.

Neeraj bagged a gold medal for India with a season-best throw of 86.47m in Men’s Javelin Throw Final event, at the Commonwealth Games in Gold Coast.

Neeraj, who is also the World Record holder in Junior circuit, threw 85.50m mark in his first attempt itself and stayed on top of the pack throughout the finals.

Neeraj struck his best of 86.47m in his fourth attempt and sealed his Gold. Neeraj’s junior world record and personal best distance is 86.48 and the Haryana man missed the mark by just 0.1m.

Punia and Navjeet Kaur Dhillon had won a silver and bronze respectively in women’s discus throw. The track and field team of athletes struck three medals, the same final count as in the 2014 Glasgow edition.

The 20-year-old Neeraj has a personal best of 86.487m which he scored while winning the junior World Championships in 2016, which is also the existing world junior record as well as the national record. His CWG gold-winning effort was just one centimetre below his personal best. He has thrown above 85m three times so far in the season.

Fresh from his Commonwealth Games triumph, star javelin thrower Neeraj Chopra  competed in the season-opening leg of the Diamond League series in Doha which started on May 14.

Neeraj, who won a gold in the Gold Coast CWG with a throw of 86.47m, participated in the midst of a star-studded field with the reigning Olympic champion Thomas Rohler of Germany and his country-mate and World Champion Johannes Vetter taking part in the event at the Qatar Sports Club.

The 14-leg Diamond League Meetings are considered prestigious events in the world. It is competed among elite athletes of the world and the top eight finishers in each leg gets prize money. The eight-place finisher gets $1000 while the winner takes home $10,000.

After Chopra finished fifth at the Rabat (Morocco) leg of the Diamond League series July with a best throw of 83.32m, he collected four Diamond League points and has a total of 12 points now. He is currently placed at sixth spot in the standings. Another Diamond League Meeting (which includes javelin) is scheduled for August 18 in Birmingham but, Chopra who is currently training in finland is not taking part in the event as the athletics events at the Asian Games start on August 25. The men’s javelin final in Jakarta will be held on on August 27. This is just three days before the Diamond League Final, which is to be held in Zurich.

“I am not taking part in Birmingham because of the Asian Games. I will be directly going to Jakarta from Finland. My final event in Asian Games is on August 27 and as of now I don’t know whether I will be in Zurich or not,” Chopra said.

The top 8 or 12 athletes (depending on the discipline) will be awarded a go at the Diamond League Final. Out of the 32 events (men and women) in the league, 16 events including men’s javelin, will have their Final in Zurich on August 30. The Final of the remaining events will be competed in Brussels on August 31.

Last year, Neeraj had taken part in three legs of the Diamond League series and accumulated six points to end at eighth place in the overall rankings.

Having said that our champion is all set for the big challenge at the Asian Games 2018 and we wish him all the best for getting a gold medal at the coveted stage.

Vardan Pandhare
Vardhan is an author who loves creativity. He enjoys experimenting in various fields. After completing his graduation, he was sure about one thing! His love for sports. He is now living his dream of being creative with words in the field of sports. He has since then always brought the latest news and updates for all the sports fans.
Previous article
Winning CWG GOLD for the first time is special: Mary Kom
Next article
ONGC Athletes who made India Proud at Commonwealth Games 2018!!

India at Gold Coast Games 2018: Team and Players to watch...