G. Sathiyan had a memorable Commonwealth Games 2018 where he grabbed a team Gold, men’s doubles silver (with Achanta Sharath Kamal) and mixed doubles bronze (Manika Batra) at the Gold Coast Commonwealth Games. And it seems winning these medals proved to be raw blood for him. He is hungry for more and waiting for a phenomenal Asian games 2018.

Any athletes will be on cloud nine, after winning medals at every front at the Gold Coast Commonwealth Games. So does Sathiyan Gnanasekaran, whos is India’s top-ranked table tennis star. He is  now eyein  podium finishes at the upcoming Jakarta Asian Games and the 2020 Olympics.

Sathiyan started 2018 as the 46th ranked player in the world, then he grabbed a team gold, men’s doubles silver (with Achanta Sharath Kamal) and mixed doubles bronze (with Manika Batra) at the  Commonwealth Games 2018, held in Australia. This helped his world ranking go up at 40, which seems to be a great improvement in a few months.

India finished by collecting eight medals in the game, including three gold, two silver and three bronze pieces at the prestigious event.

The Asian Games will be held from August 18 to September 2 in Jakarta, Indonesia. Tokyo is the host city of the Olympics two years from now.

When asked about how important performing at the Asiads is for him, he say

“If we get a medal in Asian Games for India,it will pose a really good chance of winning a medal in the Olympic Games as well, because the competition is kind of similar”

India did fairly well at the 2010 CWG, held in delhi, with a total of  five medals . The Glasgow Games in 2014 was a poor show , as only Sharath managed a silver along with A. Amalraj in men’s doubles event.

It is pretty much safe to say that at the Gold Coast, the Indian team surpassed  everyone’s expectations. And Sathiyan agrees with it. The  25 year old star said,

“We did a great job when we were actually expecting a good performance. We surpassed our expectations. I should accept that.”

“We wanted to equal our performance of 2010. We were looking forward for that and had our goals set” the young man from Chennai added. 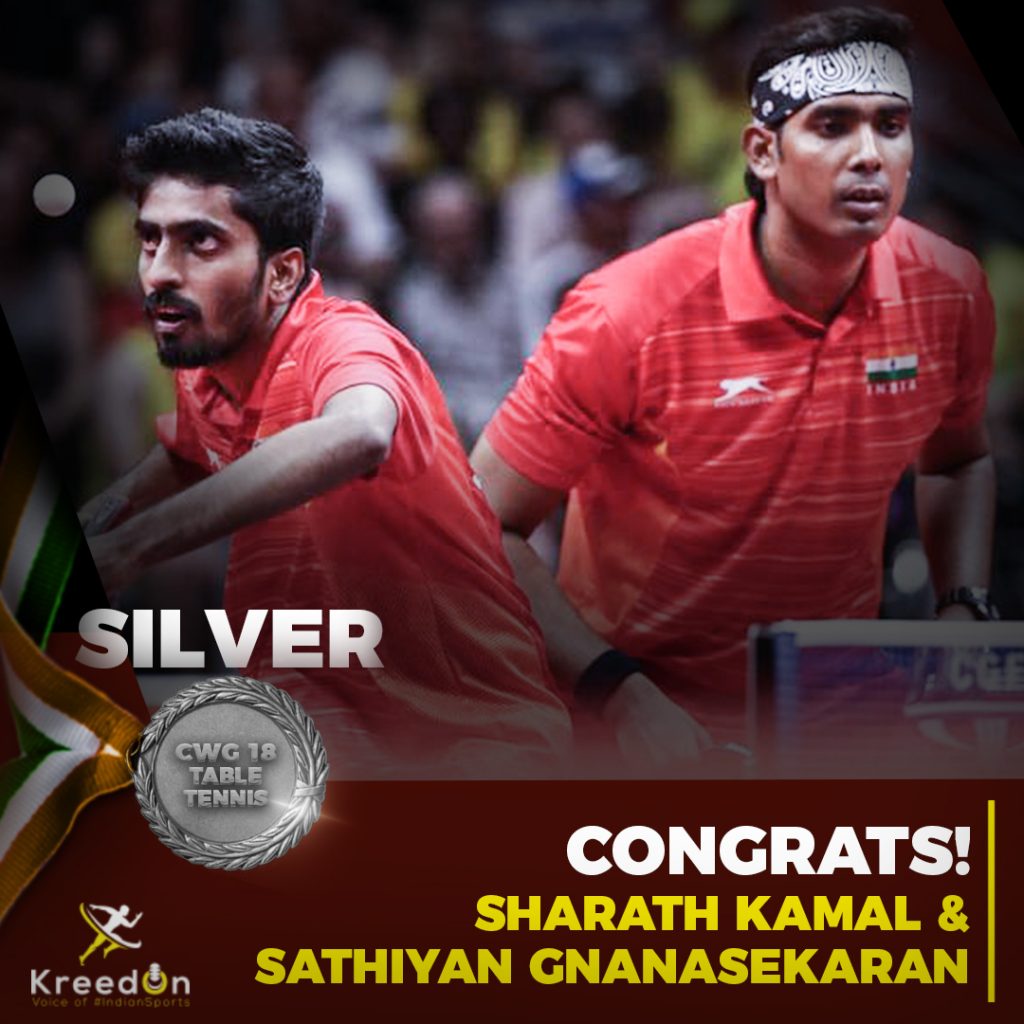 “But I think we went beyond expectations, winning medals in all the events. This is phenomenal. We did better than what we thought we could.”

Sathiyan believes that their show at a big stage such as the CWG, is changing perception of the masses regarding TT in India. In the last few years, the team has been taking giant leaps in the right direction.

“The Games is something big. So it (our achievement) is being seen on a bigger scale now. But the sport itself along with the players have grown a lot in the last few years,” added the last year’s Spanish Open winner.

“We won medals in pro tours and our rankings have also improved. These are all signs that something big is waiting to happen. It has been a long developmental process. Me, Harmeet (Desai) and (Soumyajit) Ghosh started playing abroad very early in our careers. Sharath (Kamal) is a role model and has set the benchmark for what a player can achieve with hard work.” 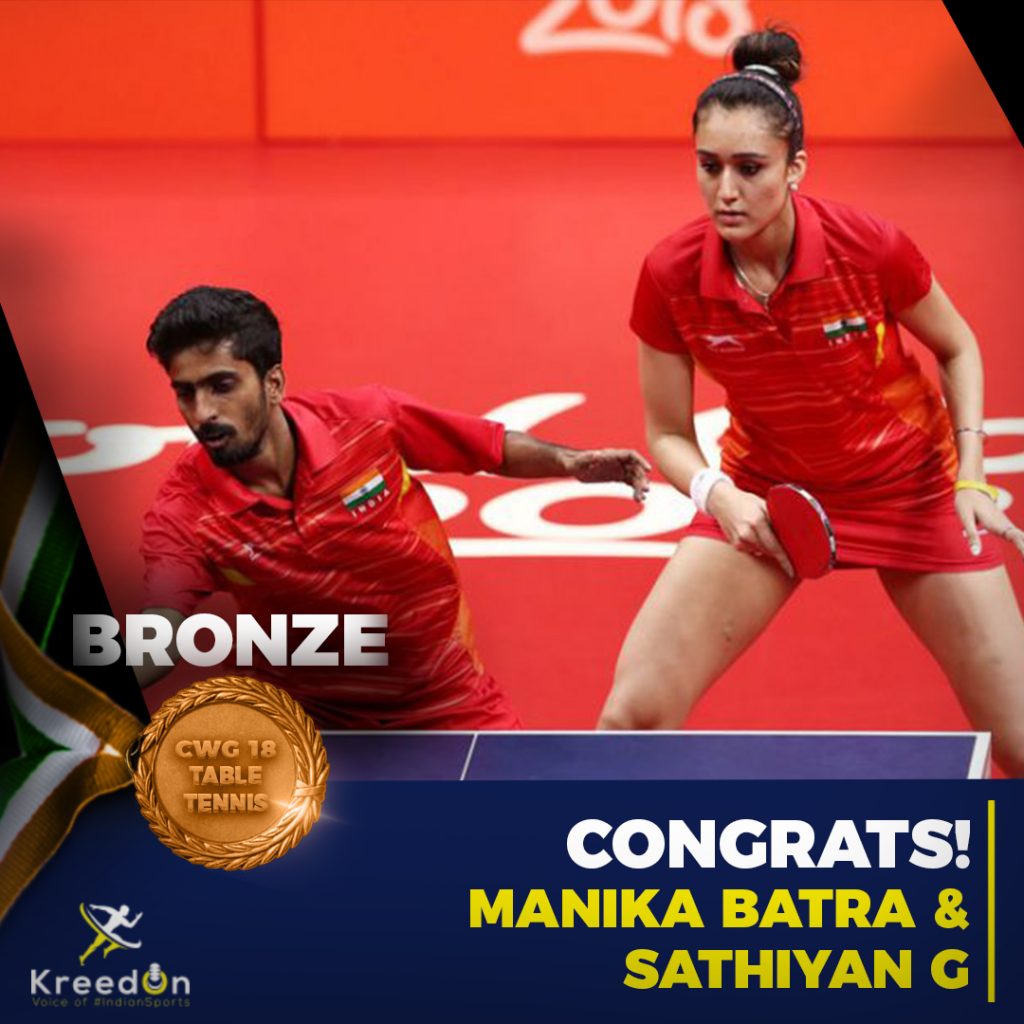 Sathiyan also put it down to team bonding and the fact that the core group of Sharath, Harmeet, Mouma Das and Manika Batra have been playing together for some time now.

The champ adds, “The team has become formidable now. The bonding between all of us has been good, as we came up together from junior to senior. The Olympic medal is obviously the bigger goal now, and it has become the team vision.”

Showering praises on Manika, he said she has taken the Indian women’s table tennis  to an all new leve.  Manika won four medals including two gold, one silver and a bronze to become the Games’ most successful Indian athlete.

“There was so much quality and that kind of stamina, even though she had matches on the same day. After losing a very close mixed doubles semi-final, it’s hard to come back and perform the way she did. She has set an example for women’s table tennis which has been in the shadows I would say,” he felt.

Sathiyan finished the interview by thanking his personal coach and former national champion S. Raman for transforming him as a player.

“He has been phenomenal as he helped me become more aggressive and I improved a lot tactically and technically under him. He has been a big influence in my career,” Sathiyan concluded.

Vardan Pandhare
Vardhan is an author who loves creativity. He enjoys experimenting in various fields. After completing his graduation, he was sure about one thing! His love for sports. He is now living his dream of being creative with words in the field of sports. He has since then always brought the latest news and updates for all the sports fans.
Previous article
CBSE sports guidelines makes sports period compulsory in schools
Next article
Seven time CWG medallist Tejaswini Sawant hungry for more!!