Cricket World Cup 2019: How this edition is different from its previous ones

The wait is almost over! With under a week left for commencement of the highly anticipated ICC Cricket World Cup 2019, the cricket craze is at an all-time high. The cricket extravaganza will return to England after 20 years, with the nation having earlier  hosted the showpiece event in 1975, 1979, 1983, and 1999. But a lot has changed since then. Technological advancements have driven the development in the sports world and the field of cricket is no exception.

Since its inception in 1975, the World Cup has been through a plethora of evolution. Let’s look at how this edition of the Cricket World Cup is different from its previous ones.

Only 10 Teams This Time

With the aim of making the tournament more competitive, ICC has decided to shrink the number of nations contesting for the title of world champions from 14 in previous editions to 10. This has invited a lot of criticism from people around the world. Cricket fans around the world have blamed the council for showing shortsightedness for taking such a step. According to some, while reducing the number will increase the competitiveness quotient of the game, it would also stunt the sports’ popularity in the associate nations. Moreover, it would also deny them  to compete at the highest level and thus, stunt their growth. It is happening for the first time that test playing nations like Zimbabwe and Ireland will not be a part of the Cricket World Cup 2019.

Even former cricketing superstars like Sachin Tendulkar, Rahul Dravid, and Shane Warne has spoken against this decision. Sachin Tendulkar said, “ICC’s decision to reduce the number of teams in the 2019 World Cup is a backward step in the global expansion of cricket and the lack of consistent matches available to Associate sides is unfair.”

No Groups This Time

A League-Knockout type format shall be followed in the latest edition of cricketing extravaganza. It means that the teams will not be divided into groups like the previous editions. Rather each team will be playing every other team (Round Robin) keeping their eye on the top of the standings. This kind of format was earlier followed in the 1992 World Cup held at Australia.

After a total of 45 matches, in which each team has played every other team once, the top 4 teams in the standings (according to win percentage and net rate) will be qualified for the semi-finals. Now the number 1 seeded (ranked) team will play the 4th seeded team. Likewise, the number 2 seeded team will play the 3rd seeded team in the Semi-Finals. The winners of the 2 semi-finals will face each other in the World Cup Finals 2019 for the title of World Champions.

Cricket control Boards of various nations have invested in high- tech vests. These vests can be worn by players during practice sessions, nets as well as in actual matches. These techs will enable the teams to collect and analyse data on various fitness metrics. The workload an athlete will be calculated using it. It does so by measuring the distance, speed, acceleration, deceleration, sprints, and dynamic stress load.

BCCI has finalised a deal with UK-based sports tech company, STATSports whose client list includes top football clubs such as Barcelona, Arsenal, Liverpool, and Manchester United. The company will be providing the Indian Cricket team base layer vests. These can be worn under a T-shirt with just a bulge visible at the back. 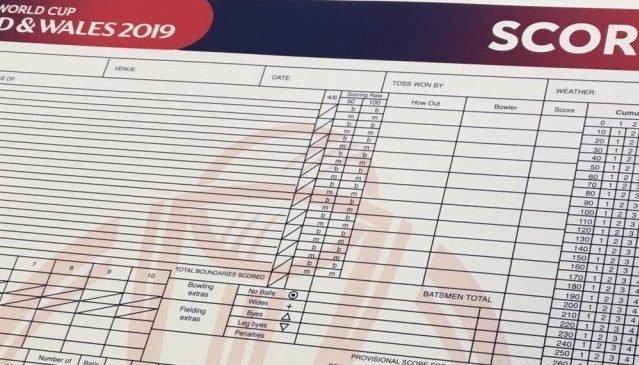 One of the souvenirs for the fans at an English cricket ground is the official fan’s scoresheet. In light of the recently concluded England vs Pakistan ODI series, 300+ runs score would be expected as chasable. Officials are expecting such high-scoring innings. To accommodate a score up to 500 runs, all the official fan’s score sheets were reprinted. A British Newspaper Daily Telegraph reported, “Scorecards bought by fans at games have a tally of runs that can be ticked off and for the World Cup they were originally designed to go up to 400. But at an operations meeting last week Steve Elworthy, the tournament director, realised they would have to be redesigned with a tally of up to 500”.

These factors make ICC Cricket World Cup 2019 one of the most interesting WCs ever. Tell us what you feel about it in the comment section.

Raghav Heda
Raghav is a sports enthusiast and a content writer at Kreedon. Being a former state-level cricketer and Captain of the Basketball team at IIT Patna, he understands the problems faced by a student-athlete in India. He is also a die-hard NBA fan and has been following the league and American Sports Media for long. Comparing the Indian sports economy to American Sports' was something that motivated him to work for the development of Indian Sports.
Previous article
ICC World Cup 2019: What you need to know about warmup matches
Next article
Batsmen with most Centuries in Cricket World Cup

Watch out for these 10 best debutants in World Cup 2019

All you need to know about the ICC World Cup 2019

How Technology Will Fundamentally Transform the Sports Experience in Future

Role of Artificial Intelligence in Sports Market Growth – How AI...