It was another eventful day for the Indian contingent and especially the weightlifters who won two gold medals in their respective category. Here’s a roundup of the Commonwealth Games action on Day 3.

Sathish successfully lifted 173 kg in his second clean and jerk attempt to bring India one more gold in weightlifting.

He lifted a total of 317 kg to beat England’s Jack Oliver, in what was a close fight. 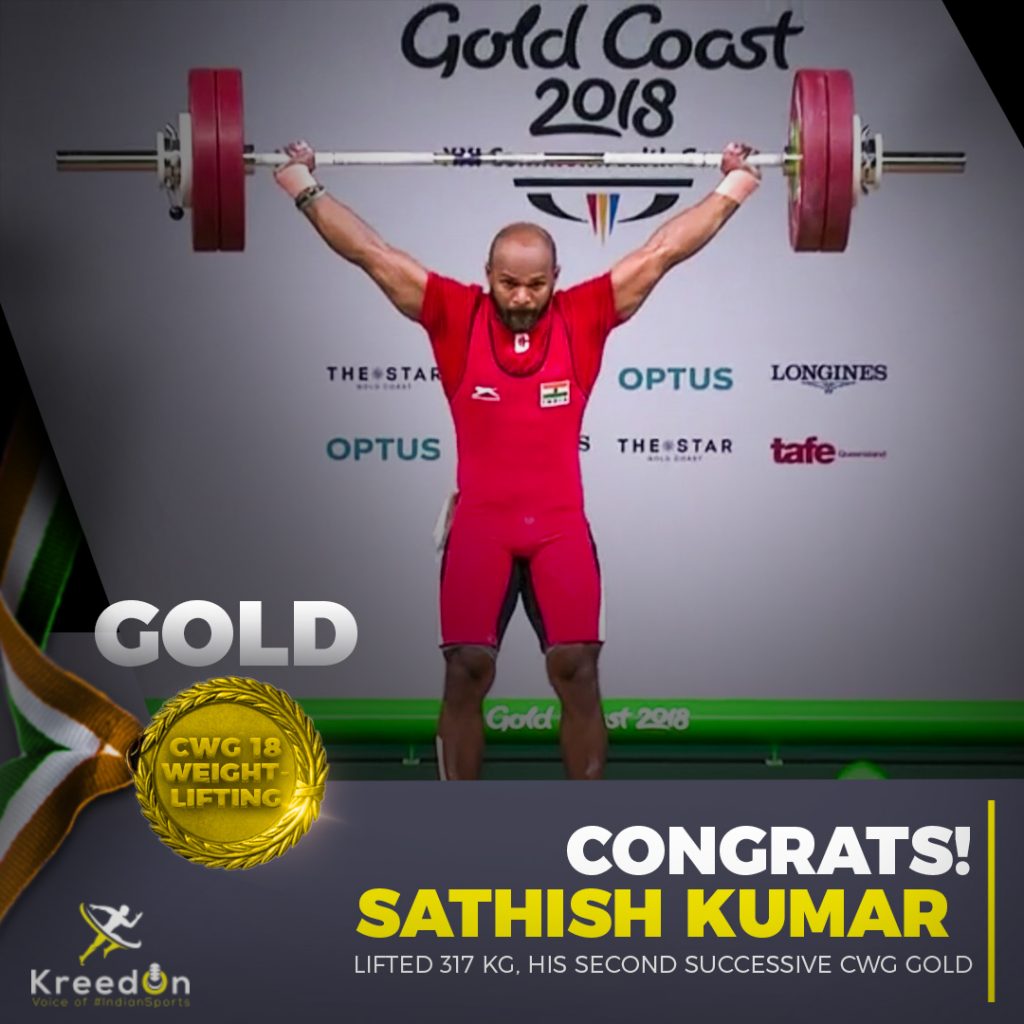 The government of Tamil Nadu announced a cash reward of Rs. 50 lakhs for weightlifter Satish Kumar Sivalingam for winning a gold medal at the ongoing Gold Coast Commonwealth Games on Saturday.

“You have done both the nation and the state of Tamil Nadu proud by winning a gold medal at the 21st Commonwealth Games. Kindly accept my heartiest congratulations on behalf of the government and people of Tamil Nadu on this splendid achievement. What is even more remarkable is that you have won a second gold medal in successive Commonwealth Games,” Tamil Nadu chief minister Edappadi K Palaniswami said in an official statement.

Australia and England are leading with 41 and 23 medals respectively.

Indian weightlifters continued their highly impressive medal-winning performances in the ongoing 2018 Commonwealth Games as Venkat Rahul Ragala clinched a gold medal in the men’s 85 kg category on Day Three of the quadrennial event here on Saturday.

The 21-year-old from Andhra Pradesh lifted 151 kg in snatch and 187 kg in the clean and jerk category to finish with a total of 338 kg to make the country proud. 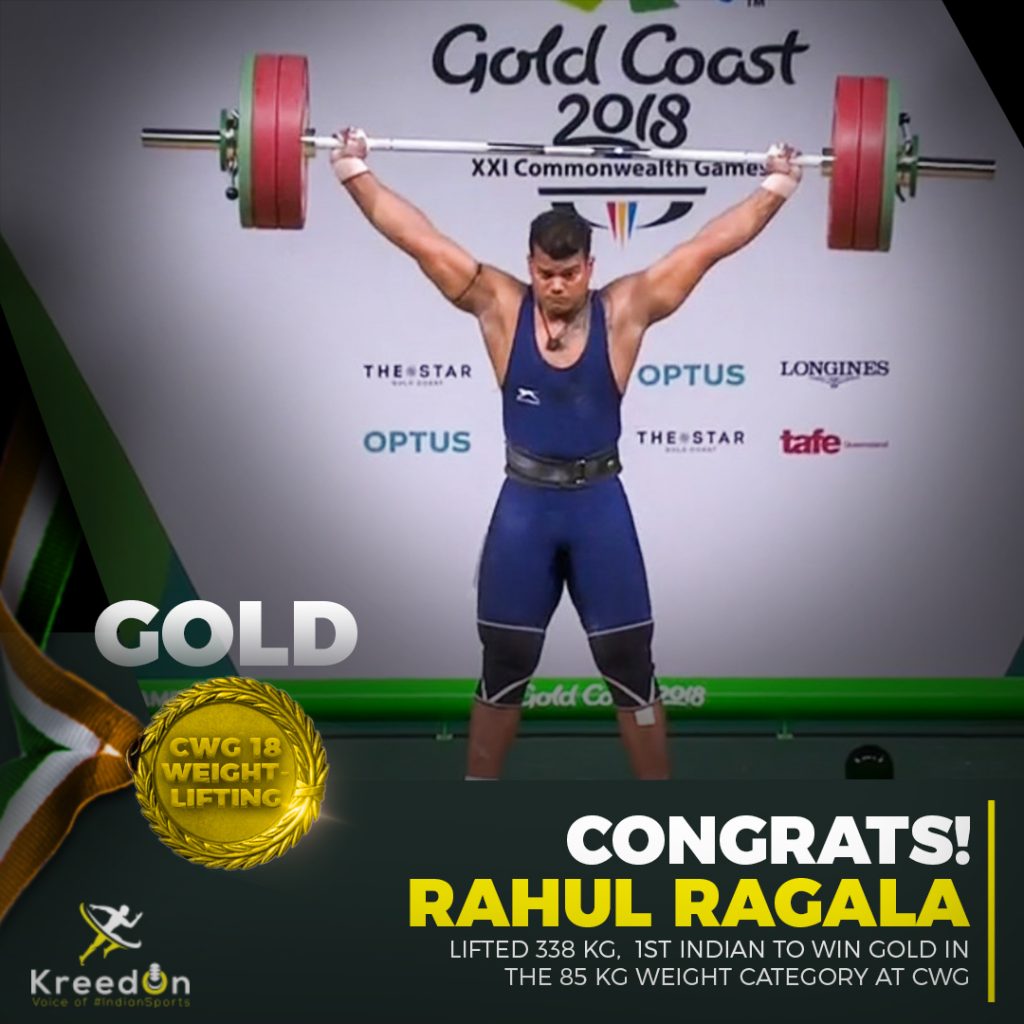 Ragala was not at his menacing best, having missed his final attempt of 191 kg in the clean and jerk category in the finals of the men’s 85 kg category.

However, Samoa’s Don Opeloge too missed his final attempt of 190 Kg to finish with the total lift of 331 kg and settled with a silver medal.

In snatch, Ragala begun with the first attempt of 147 kg before his second attempt of 151 kg was unsuccessful. He then bounced back strongly to lift 151 kg in his final attempt.

Meanwhile, Ragala lifted 182 kg in her first attempt at clean and jerk, following it with a lift of 187 kg before missing the third attempt of 191 kg. With the win, Ragala handed India its fourth gold medal at the ongoing Commonwealth Games. He further became the first countryman to bag gold in the 85 kg category.

Meanwhile, his win takes India’s total medal tally to six, including three gold, one silver and one bronze medal, all in weightlifting.

A dominant Indian badminton team continued their unbeaten streak at the Gold Coast Commonwealth Games as they advanced into the semi-finals of the mixed-team event with a 3-0 win over Mauritius.

India will now clash with Singapore to secure a berth in the final.

In the second team game, the women pair of Ashwini Ponnappa and N Sikki Reddy beat Aurelie Allet and Nicki Chan-Lam 21-8, 21-7 in 21 minutes to give their side a 2-0 advantage over Mauritius.

World No. 2 Kidambi Srikanth then thrashed Georges Julien Paul 21-12, 21-14 to win the men’s singles in 29 minutes and give India and unassailable 3-0 lead.

Earlier, India outclassed Sri Lanka, Pakistan and Scotland by 5-0 in group stages to make it to the quarter-finals.

The opening match of the Indian hockey team at the Gold Coast Commonwealth Games turned into a thriller when Pakistan came back strong in the dying second of the game to hold a leading India at 2-2.

India were leading 2-0 till the first half of the game, but Pakistan scored an equaliser with just seven seconds to spare.

India took the lead in the closing stages of the first quarter when Dilpreet Singh hammered the ball into the net off SV Sunil’s pass.

India’s got its first penalty corner in the second quarter of the game but Rupinder Pal Singh missed to send it home. Another one was missed by Harmanpreet Singh.

However, India did not fail in the third attempt and took a 2-0 lead through Harmanpreet.

Pakistan managed to earn a couple of penalty corners against a dominant India but failed to convert any as India went into the halftime with a 2-0 lead. India won a penalty corner quite early in the third quarter but Rupinder Pal Singh’s shot was deflected to keep the scoreline unaffected.

Neither of the team managed to score in the third quarter as the two teams defended resolutely.

However, Pakistan stepped up the tempo in the last quarter and finally succeeded when forward Mohammed Irfan Junior put them on the scoring board with a field goal in the 38th minute. With just seven seconds to go, Pakistan earned a penalty corner which was saved by goal-keeper Sreejesh. Pakistan then appealed for review claiming there was a foot involved from an Indian defender.

After video officials’ review, Pakistan earned another penalty corner and Ali Mubashar and they made the most of the decision to play a 2-2 draw.

India will take on Wales in their next game on Sunday and Indian coach Sjoerd Marijne insists that the team should focus on the matches to come.

“This is a setback for us, but we need to come-back strong. The leaders in the team need to step up and lead the team by making good on-field decisions and ensure we stick to our game plan,” Marijne said.

Veteran Indian boxer Sarita Devi produced a dominating performance as she booked her place in the quarter-finals of the 2018 Commonwealth Games after sweeping aside Kimberly Gittens of Barbados in the women’s 60kg category.

The 36-year-old bought her experience to the fore as she defeated Kimberly in a unanimous 5-0 verdict to make it to the last-eight of the prestigious quadrennial event. Sarita received identical 30-25 verdicts from each of the five judges.

With the win, Sarita has now set up a clash against Anja Stridsman of Australia for a place in the semi-finals of the women’s boxing 60 kg category.

Meanwhile, Indian boxer Hussamuddin Mohammed also made it to the quarter-finals of the men’s 56 kg category after hammering Boe Warawara of Vanuatu in the round-of-16. Hussamuddin remained in possession from the start as he posted a 5-0 win over Warawara through unanimous verdict. He will now lock horns with Mwanjwango Ezra of Tanzania on April 10 in his quarter-final clash.

Elsewhere in the Games, Indian swimmer Sajan Prakash, who had broken his own National Record earlier in the games, finished at a disappointing eighth spot in the finals of the 200m butterfly.

In women’s basketball, India have slumped to their second defeat after Malaysia thrashed them 85-72. India will now take on New Zealand and are unlikely to progress to the medal rounds.

Vardan Pandhare
Vardhan is an author who loves creativity. He enjoys experimenting in various fields. After completing his graduation, he was sure about one thing! His love for sports. He is now living his dream of being creative with words in the field of sports. He has since then always brought the latest news and updates for all the sports fans.
Previous article
IPL 2018 – Its CSK vs MI in the season opener
Next article
IPL Team Profile – Who’s got the upper hand? (Part 1)

Rajat Chauhan guides young archers in Rajasthan along with practicing