Coaches feel Rupam Sardar is a prodigy, can shine even at the senior level 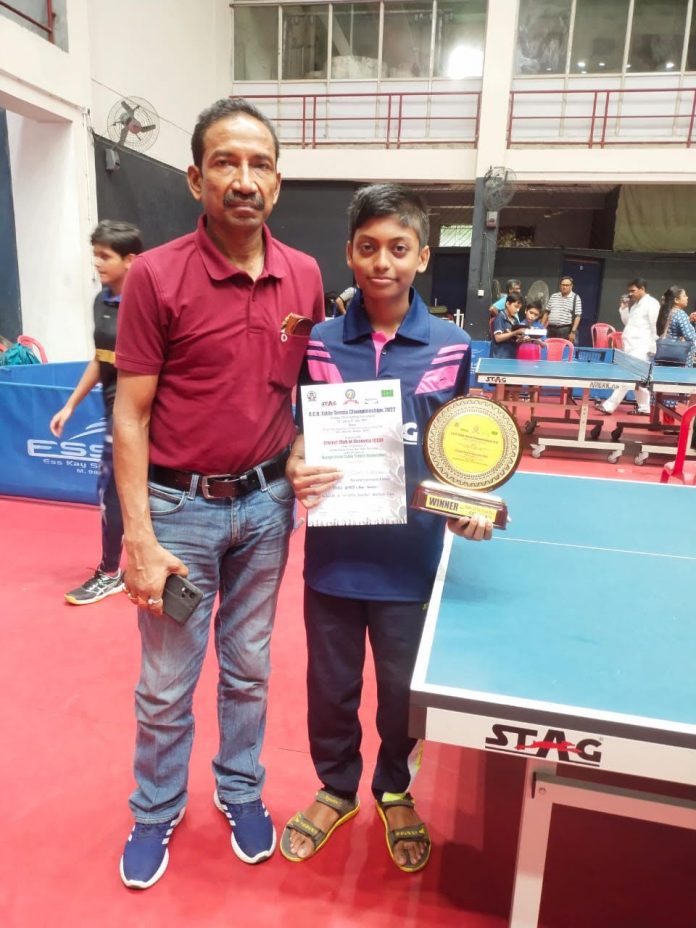 Rupam Sardar is another new kid on the block in the field of the Bengal table tennis fraternity. The 14-year-old boy from a place named Uttarpara in North 24 Parganas has not only won the state championship in an under-15 category but also exhibited an impressive eye-catching performance in the national ranking zonal championships since 2020. Rupam who is a student of 8th standard at Uttarpara Govt. High School has so far taken part in nine national-ranking tournaments including three national championships. He has been the state champion in the under-15 category held recently.

Rupam Sardar lives in a village named Makla in Uttarpara. Apart from his parents, Rupam has a brother who also plays table tennis. His father Rupchand Sardar has a small selling shop Citi-gold. After Rupam got admitted to Vivekananda Club, his father told us about his mischief behavior.

“Rupam was initially extremely restless. He always used to make mischief with other boys and girls at the club. We were often summoned by the coaches and complained about Rupam’s mischief. However, as Rupam grew older his passion for the game developed.”

Rupam trains under the observation of two coaches, Abhishek Karmakar and Amitava Saha. Presently, advanced students like Rupam train under the tutelage of Amitava Saha who was one of the prominent paddlers in Bengal. Commenting on Rupam, Karmakar opined,

“He is truly a prodigy. His performance at such an age, against the better and senior paddlers in recent times in different competitions has been so eye-catching and mature that I feel he has all the qualities to shine at the senior level also. His game is extremely aggressive.”

Amitava Saha also had a noticeable appreciation for Rupam. He uttered,

“The most positive part of Rupam is that he has a hunger for victory. He never wants to lose any match. That is why he always gives his best. Moreover, he is not strong with his fore-hand topspin shot; he is developing his back-hand play beautifully. He can offer the back-hand topspin also with precision and sharpness. If he can sharpen his quality and maintain consistency both mentally and physically then in the future in the senior level Rupam can draw attention also.”

But the coaches feel Rupam needs mental support for development. Abhishek divulged that despite having a much better performance than the paddlers, Rupam did not get a selection in the national team that had toured abroad to take part in a couple of international tournaments held in recent times. Even paddlers from Bengal were sent abroad to participate in international competitions whereas Rupam, despite a better show, was not selected. Both the coaches agreed on one point saying,

“Rupam’s game will improve more if he is sent abroad to take part in international competitions.”

Rupam’s dream player is the legendary Ma Long. He often watches videos of Ma Long’s matches and even training. He tries to learn from videos. He revealed he has a dream of shaking hands with the legendary Chinese paddler at least once. He said,

“I have another dream also. That is to bring medals from the Olympics.”

Now, Rupam who trains almost eight-hour a day is setting his eyes on the national championship title. He mentioned,

“I must have to defeat Arya Kataria, the boy from Gujarat who beat me twice consecutively in recent times.”

Bharat Chettri in a mission to bring the hockey talents in...

Koustav Chatterjee aims at taking his ELO Rating to more than...

Arundhati Choudhary is happy with the growth of girl boxers in...