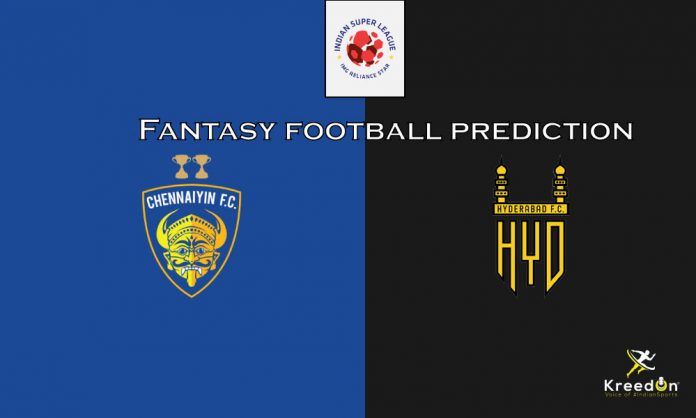 The 23rd match of the Indian Super League features Chennaiyin FC who will host Hyderabad FC at the Jawaharlal Nehru Stadium in Chennai. The game will see both of the ISL’s most poor performers in the league this season. Both the teams have lost 3 games each, Hyderabad has won just one game this season, while Chennaiyin is yet to find a win from the last 7 games in the ISL.

The 2-time champions have struggled to find a win since the end of last season. They are now 7 games without a win, and a loss or a draw tonight will add more pressure on the club management. Chennaiyin is yet to score in the ISL and could see this game as a total redemption for their poor run of games. Chennaiyin brought in Eli Sabia and Lucian Goian who have some of the best defensive stats, however, they are yet to prove their worth for the team. With star striker Jeje still out, the attacking options haven’t yet stepped up in terms of creating and scoring chances.

The newcomers are struggling to find a name for themselves in the league so far even after having some of the finest names in the ISL. Having won just one game this season, the Hyderabadi’s have lost 3 games and sit 2 points above their rivals of tonight.

They also have conceded the most goals this season, and with a Chennai side that has failed to score this season, this game looks like it will be a goal-less affair. Hyderabad will also look to exploit Chennaiyin’s poor record of having won just one home game since last season.

Picking a goalkeeper for this game was a difficult one. Vishal Kaith has conceded 7 goals in this ISL season while making 13 ,saves and registering 1 clean sheet. He was picked over the experienced keeper Kamaljit Singh who has conceded 10 goals this season.

Marcelo Pereria has scored 2 goals for Hyderabad this season. He will be looking to get back into form and to his deadly goalscoring best when he plays tonight. He has registered 9 shots and 2 crosses on goal with an average of 23 passes per game.

Stankovic has scored 1 goal so far and has registered 7 shots and 3 crosses. He averages 58 passes per game and has a 74% passing accuracy.

Chhangte and Thapa have played in 4 games for Chennaiyin FC each this season. Chhangte has registered 11 crosses and 8 shots goalwards but is yet to find the back of the net. He also averages 32 passes per game with a 52% accuracy.

Thapa on the other hand has registered 4 shots and 1 cross and averages 47 passes per game with a 75% accuracy.

KreedOn Network
We are a team of sports writers who research about sports in India day in day out. Please reach out to us in case of any specific requirement of digital services on contact@kreedon.com .
Previous articleISL 2019-20 Match 22 update: East Coast derby ends in a stalemate
Next article“De-list Manjrekar!” Fans errupt in Harsha Bhogle’s support after on-air spat