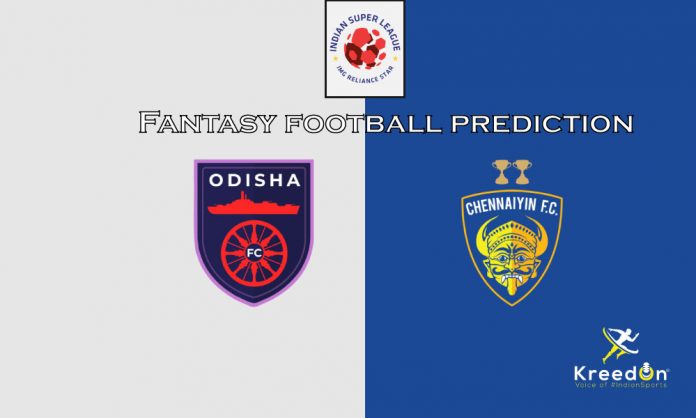 The 53rd match of the Indian Super League will feature Odisha FC who will host Chennaiyin FC at the Kalinga Stadium, Odisha. Having faced a difficult start to the season, both sides will be looking to start the year with wins before intensifying their chances of making it to the ISL playoffs.

Chennaiyin FC are currently 9th in the league. A win for them will take them up to 6th. The Marina Macchans have done well to move out of the last spot. They have also finally started to score goals, which was their biggest concern in the early half of the season. Chennai’s last game was against Goa in which they showed tremendous character to fight back up from a 3-0 deficit to eventually lose the game 4-3. Andre Schembri, Nerijus Valskis have been the main men in form for Chennaiyin and can upset the Odisha defence tonight.

Odisha FC are currently 6th in the table, and a win will take them ahead of Jamshedpur in 5th place. The team played its first home game at the Kalinga Stadium where Jamshedpur defeated it 2-1. Aridane Santana is in top form and is highly likely to create goal-scoring chances tonight.

Dorronsoro missed a few games in between as he struggled with injury and form. He is back in the Odisha starting 11 and makes it as our first choice keeper given his abilities.

Eli and Lucian, the two centre-halves from Chennaiyin FC form a solid partnership at the back. They most reliable options and will be in good form going into the game against Odisha. Narayan Das as a wing-back creates plenty of opportunities with crosses and is defensively capable as well.

Thapa and Crivellaro form a fine partnership for Chennaiyin in the midfield. Rafael scored 2 goals in the game against FC Goa and looked in terrific form, which he is likely to continue in the game vs Odisha.

Xisco and Martin are the other pair that complete a midfield 4 for our Dream11 squad. They have a total of 7 goal contributions and will surely be looking to increase those numbers in the game against Chennaiyin.

Nerijus and Andre have 11 goal contributions for Chennaiyin FC. Their form and partnership is something that the club was missing for the longest time now. With a new manager and their form, the two are likely to be on the score sheet once again.

Aridane Santana has scored a total of 6 goals and 1 assist for Odisha this season. He scored a brace against Jamshedpur and will be a lethal addition to your dream11 side.

Warad Bhat
Warad is passionate about brands, football, films and food. He enjoys reading about latest gadgets and technologies and spends his time either watching movies or cooking something new. Warad is a spiritual person who believes that to change the world you must change yourself from within.
Previous articleKBFC vs HYD Dream11 Prediction 2020 | Kerala Blasters FC vs Hyderabad FC
Next articleTT star G Sathiyan starts 2020 with a bang, wins this prestigious German tournament