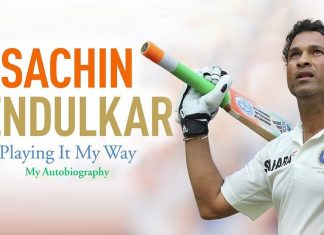 A Legendary actor, Eddie Cantor once said, “It took me 20 years to make an overnight success”. And he couldn’t be more correct. When we, the fans, watch our beloved sports stars creating records and winning trophies, we only see the successful side of their lives. But how did they get there, at the top, where millions can only imagine? Hence the sports autobiographies, which tell us all about the difficulties faced by players, their years of hard work and fight against the odds.

Usually, a good movie is the one with a fantastic storyline and a perfect ending. And although that obviously holds true for books, sports biographies/autobiographies are more than that. Along with the difficulties faced by an athlete, those books teach us more about the game we love. A behind the scenes overview of both athletes and the sport.

Here are 10 such sports biographies that you must add to your library:

10
The Greatest: My Own Story (Muhammad Ali):

It is not just the name of his autobiography, ‘The Greatest’ is also Muhammad Ali’s nickname. And why wouldn’t it be? Ali is without a doubt the greatest boxer to even enter the ring!

The Olympic Gold medallist and three-time World Heavyweight Champion fought another fight outside the ring, which is described in the book. Ali was stripped of the WBA title after joining the Nation of Islam and was completely banned from boxing for more than three years when he refused to be drafted in the armed forces. Despite facing such difficulties he came back and wrote his name in the history books as ‘The Greatest’!

This book will take you through the ups and downs of Ali’s life. Sports enthusiasts must have the book of one the most controversial and the most celebrated athlete in their collection.

9
A Shot at History (Abhinav Bindra):

Unlike most other athletes Abhinav might not have come from a very difficult background and did not have to face much hardship coming from a relatively privileged home. For instance, his father even built an indoor shooting range for him to practice. Despite of that there is no doubt that he reached where he is today only and only because of his talent and handwork, which is a testimony to how sports does not look at the class or background you come from but only on what you can do as a sports person.

Yes, the story of the first ever Indian individual gold medallist is as inspirational as it can get. His book, A Shot at History, explains how the hunger for success and a craving to achieve something can make you successful – regardless of how you train and who you are coached by. Bindra has also written about finishing 7th at the 2004 Olympics, “the darkest hour” of his career. His failure in Athens forced him to work harder than ever.

The shooter has also mentioned how an Olympian has to wait four years to redeem himself/herself, unlike a cricketer or golfer, who can make up for their mistakes in the next tournament.

Tom Brady, arguably the best quarterbacks of all time is a legendary name in American football. He has won the NFL six times, more than anyone else in history. Brady’s latest NFL title came in February 2019, at the age of 41!

His book is unique for a number of reasons. The TB12: How to Achieve a Lifetime of Sustained Peak Performance, takes readers into the mindset of the legendary footballer. The book tells us about Brady’s fitness regime, exercise, and training. It is a great book for amateur athletes, explaining the importance of focused and disciplined life. And who better than a 41-year old, still going strong to explain it, to explain it.

The book became a best seller on Amazon within 48 hours of its release and also featured on New York Times’ best sellers list.

7
The Race of My Life (Milkha Singh):

We have all seen the movie Bhaag Milkha Bhaag, but there is nothing like reading about a legend in his own words.

Milkha Singh’s childhood was difficult, to say the least. Born in Govindpura, now a part of Pakistan, Milkha struggled a lot during the partition. A number of his family members, including his parents, were killed. Living in refugee camps and spending time robbing trains, Milkha was on the verge of entering the crime world ones and for all. But the recruitment in the Indian Army changed his life forever.

And from there, a boy who had never heard about athletics or the Olympics became one of the best Indian athletes of all time. An inspirational story in every way along with the difficult times during the partition – A treat for sports and history enthusiasts.

“My Years of hard work, the refusal to give up, pushing every boundary there was. The thrill, the joy of winning, the successes. The Olympic bronze, my most prized possession. And boxing, the sport I gave myself to. All of it is real. I was the David who took on the Goliaths in the boxing ring – and I won, most of the time.”

This part of the book is more than enough reason to read the book. Mary Kom, born to landless agricultural laborers in Manipur had a difficult life from the beginning. And as if that wasn’t enough, she had to carve her own path in the sport dominated by men.

But if Mary Kom can fight well inside the ring, you have no idea how exceptionally she can fight against odds outside it. She faced every adversity with gloves in her hand and landed a knockout blow to become a six-time World Champion and an Olympic bronze medallist.

5
Playing It My Way (Sachin Tendulkar):

Who wouldn’t want to know more about the life of Sachin Tendulkar – The God of Cricket! And given the crazy following of the Little Master, it is no surprise that this book broke all kinds of selling records, just like Sachin did with the bat.

Playing It My Way takes us on a 24-year journey of Sachin Tendulkar’s glorious cricketing career, told by the man himself. Sachin talks about his number of memorable innings, dressing room incidences and controversies. The Batting Maestro also discussed one of the most difficult times of his life, the Tennis Elbow injury.

If you are a Cricket fan, you must have this book in your collection.

One of the most inspiring comeback stories you will ever read is of Bethany Hamilton. The American surfer lost her left arm to a shark attack back in 2003.

But she did not let that attack or a lost arm stop her from doing what she dearly loved. Bethany returned to surfing after recovering from her injury and continues to surf even today with just one hand. She has also won a number of competitions after the shark attack.

Bethany’s unbelievable story has been told in the Soul Surfer which was later made into a Hollywood movie of the same name.

3
The Test of My Life (Yuvraj Singh):

Yuvraj Singh’s life is nothing short of a movie itself. But for now, his story has been told by the Southpaw himself in his sports autobiography.

Yuvraj Singh’s exceptional 2011 World Cup was followed by one of the most horrible news. The all-rounder was diagnosed with Cancer and his Cricket career was deemed ‘over’ by almost everyone. But Yuvraj returned to the field after just two years setting an example for everyone fighting against the life-threatening disease.

In the book, Yuvi has talked about his journey to the top of the mountain – Man of the Series at the 2011 World Cup, despite suffering from Cancer and even vomiting blood during the course of the tournament. He then discusses his treatment period in the United States during Chemotherapy and how he battled against the biggest test of his life and returned victoriously.

2
My Turn: The Autobiography (Johan Cruyff):

This is truly a treat for football (Soccer) fans around the globe. In My Turn, an autobiography named after his famous ‘Cruyff Turn’, the legendary Dutch footballer talks about the game he revolutionized with his vision and philosophy.

Johan Cruyff was one of the finest footballers of all time, with 3 Ballon d’Or to his name along with a cabinet full of trophies. But it was his managerial career which really forced people to nickname him ‘The Genius’.

Cruyff’s ‘Total Football’ is a unique philosophy where a team maintains the structure while playing a fluid passing game. It became extremely famous and was used by his pupil Pep Guardiola at Barcelona, which helped the club to ‘European Treble’. A similar style was also used by Spain in their 2010 World Cup triumph.

In this book, Cruyff has explained his philosophy in his own words. He has mentioned his favorite formation, Dream XI and much more. There is nothing better than reading about the art of football written by the artist himself.

1
The Blind Side (Michael Oher):

I Beat the Odds: From Homelessness to The Blind Side – A little longer than a usual title for a book which is a story of one of the most unique success stories in the American Football.

Not a lot of people are aware of Michael Oher, the offensive tackler in the American Football. After all, he is currently a free agent after playing for three different teams in seven years. But it is not his career but the story which helped him reach here is absolutely incredible.

Born to a drug addict mother, Michael had a forgettable childhood with time in prison, failure in school and moving in and out of foster homes on a regular basis.

But he finally found a home when Leigh Anne and Sean Tuohy allowed Oher to live with them and eventually adopted him. Oher played football in school and college, while also trying the balance his studies. And after a successful college career, the tackler was the 23rd pick in the first round of the 2009 NFL Draft.

From a homeless kid to NFL Player – Michael Oher’s story is a must read for every sports fan. The movie of the same title was also made where Sandra Bullock played the role of Oher’s foster mother.

Top 5 Youngest Player in IPL of All Time