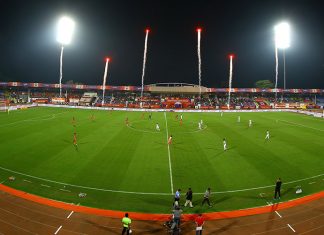 Gone are the days when Cricket was the only sport in India. With the rise of ISL and the increasing fan base for the Blue Tigers, the Indian football is starting to dream again. India hosted the 2017 U-17 FIFA World and will once be the host for the 2020 U-17 FIFA Women’s World Cup. If that doesn’t show India’s progress in India, what will? And for the FIFA tournaments, international games, ISL and several domestic games, the Government of India have worked wonders to provide bests possible football grounds. Here are the ten best football stadium in India:

Salt Lake Stadium or officially, Vivekananda Yuba Bharati Krirangan (VYBK) in Kolkata is without a doubt the most iconic football stadium in India. Built-in 1984, Salt Lake was the largest football stadium in the world until 1989. The stadium’s record attendance of 131,781 came in 1997 during a Federation Cup semi-final between Mohun Bagan and East Bengal.

Although Salt Lake’s capacity came down to 85,000 after the renovation in 2011, the Stadium has witnessed some of the great moments in Indian football history. The final of the 2017 U17 World, first-ever FIFA tournament hosted in India was played at the Salt Lake Stadium. Some of the soccer world’s legendary names like Lionel Messi and Oliver Kahn have also graced the stadium. The Blues Tigers have also played many important games on this stadium.

The stadium is currently the home of ATK in the Indian Super League and two of the biggest rivals in the Indian football, Mohun Bagan and East Bengal of I-League.

Jawaharlal Nehru Stadium in the capital city is architecturally one of the most beautiful stadiums in India. It first opened in 1983 as a multipurpose sports stadium and was renovated in 2010 to meet the international standards of FIFA, AFC and IAAF. After the renovation, the stadium has the capacity of 60,000 people.

Like Salt Lake, Jawaharlal Nehru Stadium has also played a part in Indian football’s history. The stadium witnessed an exhibition game between India and Bayern Munich in 2012. Although India lost the game 0-3, many will remember the game as the farewell game of the Indian legend, Baichung Bhutia.

The capital city stadium also hosted eight games during the FIFA U-17 World Cup and will again be one of the main stadiums during the 2020 FUFA U-17 Women’s World Cup. It is home to ISL’s Delhi Dynamos FC and was named the ‘Best Pitch’ in ISL at the end of the last season.

Built in 1988, The Mumbai Football Arena was renovated in 2016 and has quickly become one of the most football stadiums in India. After the renovation, the stadium hosted India’s FIFA international friendly against Puerto Rico on 3rd September 2016. India won the game 4-1 in what was the first international friendly played in Mumbai in 61 years.

The stadium once again came in the limelight in 2018 when Sunil Chettri’s message on the social media to support the Blue Tigers worked wonders. After the captain’s request, fans came in numbers for the Intercontinental Cup as India beat Kenya 2-0 in the final.

Although the stadium has the capacity of only 8,000, it is known for its atmosphere whenever the Indian team plays here. Since 2016, the Mumbai Football Arena has also been the home of Mumbai City FC in ISL. The stadium also hosted the final of the 2018-19 ISL, where Bengaluru FC defeated FC Goa.

Known as the nosiest football stadium in India, Jawaharlal Nehru Stadium is the proof of football’s growth in India. Built in 1996, the stadium was used for both Cricket and Football. But with the increasing fan base for the Kerala Blasters in ISL, it has become a football-dedicated stadium in the past few years.

The Kochi-based stadium was renovated in 2008, and its architecture creates an amazing atmosphere during the games. It has the capacity of 80,000 which comes down to 40,000 during ISL games. 2kW floodlights, which provide lighting levels for HD telecast, is another unique feature of the stadium.

Home of Kerala Blasters, Jawaharlal Nehru stadium holds the unique record for the highest average attendance (47,427) for football clubs outside Europe in the domestic league.

The state of the art football stadium in Pune is a part of the multi-purpose sports complex. The sports complex was built in 1994 and was renovated in 2007 for the next year’s Commonwealth Youth Games.

The Indian football team has also played a few games here. In the team’s first game at the stadium, the Blue Tigers won 3-1 against Vietnam.

Sree Kanteerava Stadium is the home of the ISL champions Bengaluru FC. With the support of West Block Blues, the great fan base of Bengaluru FC, you would find it difficult to differentiate the stadium from most of the European football stadiums.

Built in 1997, the multi-purpose stadium also has rock climbing walls, a running track, and a volleyball court. The stadium has the capacity of 25,000 people which turns blue during ISL games.

Sree Kanteerava Stadium has also hosted several Indian football games. The Blue Tigers have won 4-1 against Macau at the Asian Cup qualifiers in 2017.

The stadium has the capacity of 27,877, but only 19,484 of them are opened during ISL games. The highest-scoring match of the ISL was played here with Chennai winning 5-1 against Mumbai City FC.

Fatorda Stadium, officially known as the Jawaharlal Nehru Stadium has been the home of various football teams since 1989. The residents of Goa bring their carnival culture to the stadium every time the stadium hosts a football game.

The stadium was renovated in 2014 as it became the home of FC Goa. It has the capacity of 25,000 people, which reduces to 18,600 during ISL games. During the 2007-08 I-League, Fatorda Stadium was the home of as much as four Goan clubs, Dempo S.C., Churchill Brothers S.C., Salgaocar S.C., and Sporting Clube de Goa. The stadium hosted several matches during the 2017 U-17 FIFA World Cup.

JRD Tata Sports Complex became one of the finest football stadiums in India after its renovation in 2017. The renovation cost for the stadium was ₹400 million. But with state of the art sports facilities, it was worth it.

The stadium has the capacity of 25,000 people and is the home of Jamshedpur FC in ISL. It also houses a 32-years-old institute, the Tata Football Academy.

North-East India, the home of Indian football, is represented in ISL by NorthEast United FC. And the team plays their games at the Indira Gandhi Athletic Stadium in Guwahati. Ready in 2007, the stadium with a total capacity of 35,000. But the full capacity came down to 23,850 before the start of the U-17 World Cup.

In 2016, the game between NorthEast United and Chennaiyin FC witnessed the record crowd of 32,844. The stadium has also hosted the Blues Tigers on several occasions. India’s 6-1 win against Laos in 2016 came at Guwahati.

Kagiso Rabada is the current purple cap holder in IPL 2020. Ricky ponting considers him the best T20 bowler. And he is not wrong, here is a proof of his temperament.
Read more
Inspiring Stories

There is something about PV Sindhu, something that started a billion conversations, generate millions of dollars, and completely revolutionize Indian sports.
Read more

Meet Afshan Ashiq – The transformation of a Kashmiri Girl from...