The entire world was pinned to their screens by the nerve-wracking and spine-tingling Final of the FIFA World Cup 2022. Well, well, well, what a game it was! The drama, the tension, and the emotions were unparalleled. Argentina held their nerves and Messi lifted the most coveted trophy in the football world. It was a dream moment for Messi and a dream Final for all the football fans and pandits. It has been a while since the moment Messi lifted the trophy. Debates are still raging about who is GOAT and which was the best jersey among all the 32 nations, participated in this mega event. So, let’s have a piece of it and here is the article discussing the top 7 best 2022 FIFA World Cup kits/FIFA World Cup Jersey. 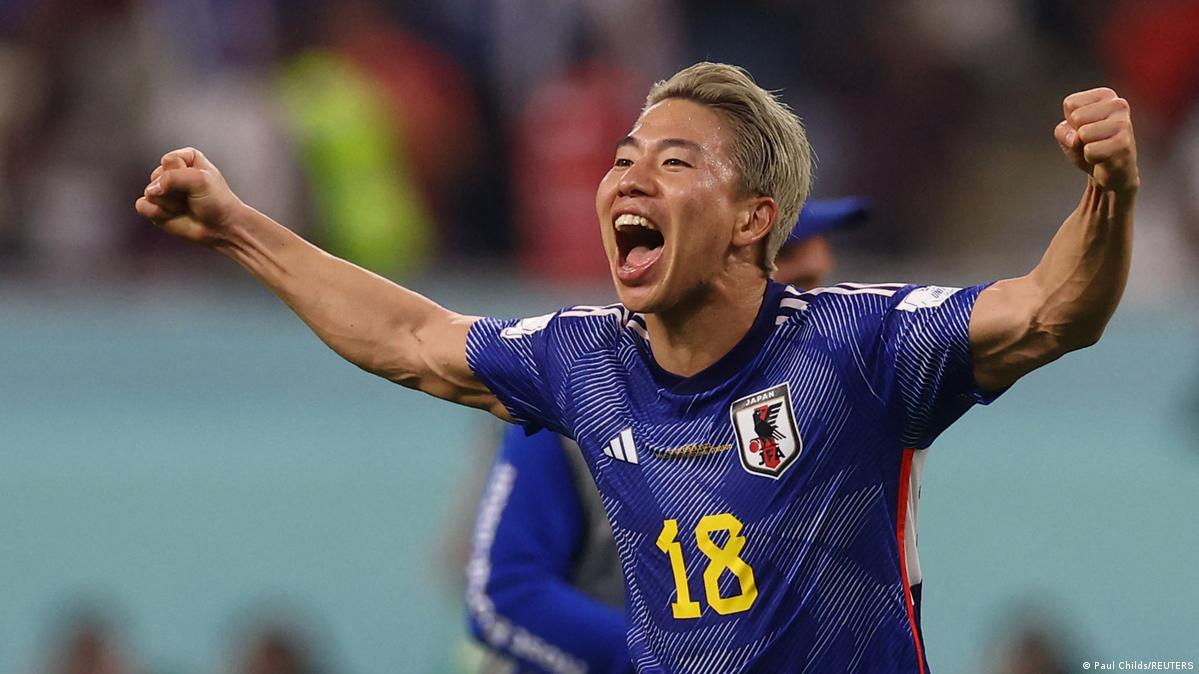 Japan has earned an immense amount of respect through this world cup and even off the field as the Japanese fans, as always, have won the hearts of the world by cleaning the stadium after each match, while on the other side, Japanese players have fought valiantly and have defeated two footballing giants Germany and Spain in the group stage.

Though they couldn’t repeat the performances in the round of 16 class against Croatia, they will still be remembered, both for their on-field brilliance and brilliant outfit as well. Japan’s Jerseys in FIFA World Cup 2022 are quite attractive and stylish. Their jersey has a zig-zag design of light and dark blue accompanied by a red border at the bottom and three white strips at the shoulders.

Witnessing Spain going out of the world cup 2022 and that too in a very disgraceful manner does hurt you as a football fan. How on this earth could a formidable side like Spain miss the first three penalties of the penalty shootout?

Spain’s red jersey is okay, but the blue one has a fantastic color combination. The sky blue colored jersey has some amazing snake-like graphics of slightly darker blue. The dark blue shorts and red stripes on the shoulders make the jersey one of the memorable jerseys of the tournament.

Ghana has a pretty average 2nd kit. Well, the whole jersey is in red and has red, yellow, and green stripes inside a yellow square at the front of the jersey. It is very difficult to explain why the yellow square has been added there.

Anyway, Ghana has been included in this list thanks to their first jersey which is a completely white jersey. This jersey has red, yellow, and green stripes at the end of the sleeves.

It is heart-wrenching to see the Germans not making up to the round of 16 and that too for the second time in a row. Well, their performance up front was not up to the standards, the team lacked efficiency and the Manager Hansi Flick has been targeted by many for erroneous playing XI selection.

Anyway, when it comes to their jersey, they do sit amongst one of the best. Though the second kit is not that good, the first one is just fabulous. The simple and creative design makes it one of the most beautiful jerseys of this World Cup.

The white-colored jersey has a black-colored column starting from the neck and it goes all the way down to the end of the shirt. Three black stripes at the shoulder do give a very sporting look to it. Well, most notably, the golden letters, numbers, and symbols do give a regal appearance to the Germans.

Finally, Messi lifted the golden trophy which kept eluding him for years. The final of FIFA WC is probably the greatest final among all the sporting events. That final definitely was once in a lifetime. It was a roller coaster ride for sure. Argentina is the FIFA World Cup Champions.

Argentina has been the dominant force in football for decades and this dominant force has been recognized for their traditional blue and white striped jersey. There isn’t much difference when it comes to the first kit, but the second kit really looks sensational.

Mexico does have a very satisfying green kit with white shorts. Both shirts and shorts have been decorated with red stripes on the shoulders and the side of the thighs respectively. Well, to be honest, Mexico is appearing on this list only because of their first kit.

The 2nd kit is white with various designs and shapes printed in red color. Mexico ended the 2022 World Cup journey at number 3 in group C.

Denmark has the simplest design of the jersey amongst all the 32 participating nations in FIFA World Cup 2022. There are some reasons for such simplicity at the world event. Denmark had 3 jerseys in this World Cup and the colors used were red, white, and black. All the jerseys didn’t have any design. These jerseys are called ‘toned down’ jerseys.

Denmark has taken such steps to protest against World Cup in Qatar which is built by the needless sacrifice of thousands of migrant workers. Despite the most simplistic designs, the kit looks good and equally beautiful.

Japan’s jersey in World Cup 2022 is the most attractive. Their jersey has a zig-zag design of light and dark blue accompanied by a red border at the bottom and three white strips at the shoulders.

France, Argentina, and Brazil are the favorites to win the World Cup 2022. However, Brazil’s journey ended after a defeat to Croatia.

Saurabh Sameer Karmarkar
Saurabh’s love for Test cricket has no limits. He indulges himself in listening to experts talking about Test cricket. Saurabh absolutely loves the way Aussies play the game. He is quite new to football, but football fever has taken complete control of him. He is an ardent Bayern Munich fan. Saurabh loves to write about sports. Other than sports, he is a voracious reader, a fitness freak, loves physics, loves to stay away from social media, and a Mechanical Engineer too!
Previous article
Top 10 Best Muscle Blaze Whey Protein | Get Your Protein & Boost The Muscle Building Process Today
Next article
Top 10 Best Football Club Jerseys | Support Your Favorite Club With All Your Might

Defying all odds Ranjita Devi moves on, dreams of officiating in the World Cup

Nadiya Nighat ‘The Joan of Arc’ in Kashmir Football – KreedOn...