A lot has changed in the world of cricket since its inception way back in the 18th century. The rules have drastically changed, test cricket is in danger of becoming extinct due to the new and entertaining T20 format, there are T20 Leagues all around the world, and the list can go on and on. But one thing that has not changed is the craze and excitement for the ICC Cricket World Cup since its first edition in 1975. The past 12 editions have seen some seriously talented teams led by their uniquely skilled captain conquer the world. Here’s a list of the best cricket captains in the world cup who led their team’s to the ultimate glory:

Clive Lloyd was the captain of the most dominant team ever in the history of test cricket. Born on 31 August 1944, in Georgetown, British Guiana, he was a hard-hitting yet dependable left-handed batsman and a part-time medium pacer.

One can argue that his job as a captain was pretty straightforward. With a pack of gunners including the likes of Roberts, Marshall, Holding, Garner, and Croft at his command, and batsmen of the calibre of Haynes, Greenidge, and Richards, he certainly had some serious talent to rely upon. But he holds the credit for instilling his talented side with the professionalism and determination propelling them to win consistently, even when the odds were against them. In fact, he gelled them as a team from a bunch of talented individuals uniting the disparate threads of the separate nations that make up the West Indies.

The West Indian Cricket dominance under Clive Lloyd was evident in the first 2 editions of the ICC World Cup (earlier called the Prudential Cup). The talented squad played big throughout both the tournaments.

In 1975, Clive Lloyd scored a match-winning century in the final against Australia. West Indies were 50-3 when he came in to bat. Lloyd scored 102 off 88 balls at the Lords which remained the only century of his career in limited-overs cricket. He engraved their names in the history books as the first-ever World Champions of cricket.

Also Read: India vs Pakistan | What is The Fuel Behind Their Rivalry?

Kapil Dev Ramlal Nikhanj is arguably the greatest Indian all rounder ever. He was named the Indian Cricketer of the Century by Wisden in 2002. Born on 6 January 1959, Kapil’s biggest asset was his outswinger that he bowled at will. He famously remarked: “God gave me the outswinger, I had to develop the rest”.

The 1983 Indian team achieved what was highly believed as impossible then. The underdogs defeated mighty West Indies to become the World Champions and revolutionised the landscape of World Cricket. On 18 June 1983, Dev produced what is arguably the best individual performance by an Indian Cricketer. India was facing Zimbabwe in a must situation. India was under crisis at 9-4 when Kapil walked in. The 24-year old refused to give up and soon started taking things under control. He ended up scoring an unbeaten 175 runs off 138 balls shattering a plethora of records in the books which remained untouched for years.

The finals were set at the home of cricket against the back-to-back champions West Indies. The bookies ran odds to 50:1 against India. But one man refused to believe in it. And again it was the Indian captain who stood tall when it mattered the most. 24-year old Kapil Dev still remains the youngest captain ever to bring home the highest honour in the world of cricket, the Cricket World Cup.

Allan Border or famously known by the name captain grumpy is among the most achieved Australian to ever play the game. The left-handed batsman retired from cricket as the leading Australian run-scorer in both ODIs and Tests.

In its fourth edition, the World Cup finally came to the land where it was loved the most – the Indian Subcontinent. And the number of overs was reduced to 50 from then on. The tournament started with possibly the most exciting match that one could imagine. Australia defeated the host nation India by just one run.

Allan Border-led side won the 4th edition of the tournament in the Indian subcontinent in 1987. Allan recalls their triumph: “We went into that tournament as rank outsiders … total underdog status. The West Indies were the dominant team. England, India and Pakistan were all ranked higher than us and we were probably on the bottom rung with New Zealand and others.” They beat England by seven runs in the final in what was then known as Calcutta. This embarked the dawn of Australian dominance in the limited over cricket.

Now known to the World as the Prime Minister of Pakistan, Imran Khan is arguably the most successful Pakistani Cricketer ever. The 5th edition of the World Cup was hosted by Australia and New Zealand. With South Africa’s addition, the number of participants went up to nine for the very first time in the tournament’s history. This World Cup was a new beginning for the game of Cricket, with coloured clothing, a white leather ball, black sight screens and day-night matches. It was again the underdogs this time who stood up to the challenge and proved that hard work and dedication with heart is all you need to become the World Champions.

Pakistan managed to enter the semifinals with a marginally better record over Australia and West Indies in the league. They defied the odds defeating New Zealand, setting up the Finals against England.

The 39-year old Pakistani Captain stood tall on the day it mattered the most. He scored a match-high 72 runs and took the final wicket to mark the end of his illustrious career with a World Cup title.

Arjuna Ranatunga is regarded as the pioneer of Sri Lankan cricket. He lifted it from the underdog status to one of the dominating forces in the cricketing world. He became the captain of Sri Lankan Cricket team in 1988, transforming it from a weak routinely defeated team into a competitive and successful unit in the next 11 years. Ranatunga even led the team to their greatest triumph in the 1996 World Cup. His innovative captaincy and strategies were followed by other teams. In fact, he was the brains behind the strategy of scoring maximum possible runs in the first 15 overs of an ODI match. Being the explosive opener, Sanath Jayasuriya perfectly executed this strategy. He was famous for defending his team and players at all costs regardless of what they did.

The semi-final between Sri Lanka and India is one of the most controversial and famous incidents. Chasing 252, Team India went from 98-1 and 120-8 and the Indian fans simply could not take it. They started throwing everything on the ground, and the stadium was then cleared to later resume the play. Sri Lanka made it to the Finals facing Australia. On 17 March 1996, Aravinda de Silva’s all-around performance with 3 wickets and century made Sri Lanka the World Champions.

Steve Waugh became the captain of Australia in the 1999-00 season following the retirement of Mark Taylor. This embarked the start of an era of Australia dominance in the world of cricket. The Australian Team won 16 consecutive test matches including a whitewash of West Indies, a record untouched till date.

The Australian team had a slow start in the 1999 World Cup. Australia lost to New Zealand and Pakistan after a scratchy win against Scotland. This made their remaining two group matches must win. In fact, this meant seven consecutive matches without defeat to win the World Cup.

Steve made his intentions clear in a defining knock of 120* in the super-six face-off against South Africa. Australia were 48/3, chasing 272 when he arrived at the crease. He is famously rumoured to have told Herschelle Gibbs, “Mate, you just dropped the World Cup” after being dropped by him on 56.

The final was a one-sided affair, thanks to Shane Warne’s 4-33 as he bundled Pakistan to 132. Australia chased the target in 20 overs to claim their second title.

Ricky Ponting is widely regarded as the greatest cricket captain of all time and one of the greatest batsmen of all time. Ponting captained the Australian National team during its ‘golden era’ from 2002 and 2011 in ODIs. Australia holds a record 34 match winning streak in the World Cup. Winning 2 World Titles in the process under the captaincy of Ricky Ponting. Australia won 165 ODIs at a winning percentage of 76.14 and 48 Tests with a win percentage of 62.33 under Ponting’s captaincy. As a batsman, Ricky Ponting is the only Australian to score more than 12000 runs in Test Cricket and 10000 runs ODI Cricket. Also, he is third in most centuries in Tests as well as ODIs.

Australia pulled off the 2003 World Cup Finals against India. It was fueled by Ponting’s 140 run knock to post a target of 360. The 2007 World Cup Finals was again a one-sided affair, thanks to Adam Gilchrist’s 149 off 104 balls.

MS Dhoni or Mahi is one of the most intelligent players ever to play the game of cricket. He is the only captain in the history of Cricket to have led a team to all 3 ICC Championships: 2007 ICC T-20 World Cup, 2011 ICC World Cup and 2013 ICC Champions Trophy. The 2011 World Cup, however, was a special achievement, close to the hearts of Indian fans all around the world. Dhoni scored an unbeaten 91 off 79 balls and finished the match with a classic six announcing the arrival of the new World Champions in the world. It is still a goosebumps moment to look at that game-winning sixer hit by Dhoni in the World Cup Finals.

Michael Clarke is the first captain of Australian T-20 International Cricket Team. The right-handed middle-order batsman is the reason the Australian dominance did not vanish, unlike the West Indies. He overtook the captaincy from Ricky Ponting after the 2011 World Cup’s quarter-final exit. Also, he has 70.42-win percentage in 74 ODI matches as captain, winning the 2015 ICC World Cup in the process.

Clarke announced his retirement from ODI Cricket prior to the World Cup Finals against New Zealand. He bid farewell to white ball cricket with a game-winning 74-run knock off 72 balls, propelling his side to regain the World Title. Clarke goes in the history books of cricket as a batsman of impeccable class and a captain who took the challenge and emerged with an enviable record in both spheres. 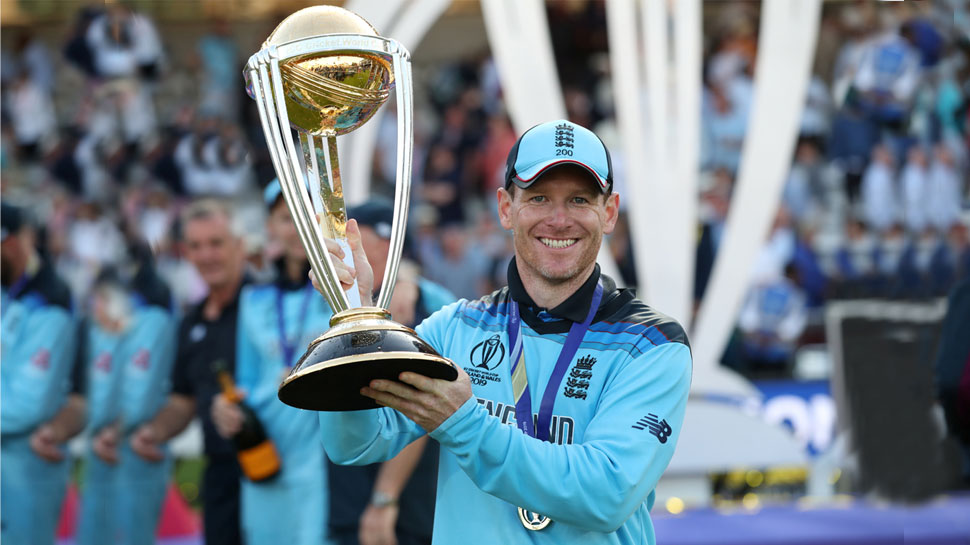 Raghav Heda
Raghav is a sports enthusiast and a content writer at Kreedon. Being a former state-level cricketer and Captain of the Basketball team at IIT Patna, he understands the problems faced by a student-athlete in India. He is also a die-hard NBA fan and has been following the league and American Sports Media for long. Comparing the Indian sports economy to American Sports' was something that motivated him to work for the development of Indian Sports.
Previous articleHockey is NOT the National Sport of India? Here’s Why!-KreedOn
Next article10 Famous Yuvraj Singh Records that will remain Legendary

Wisden Cricketer of the Year | List of Wisden Award Winners...

Which Team Will Ravichandran Ashwin Support in FIFA World Cup 2022...