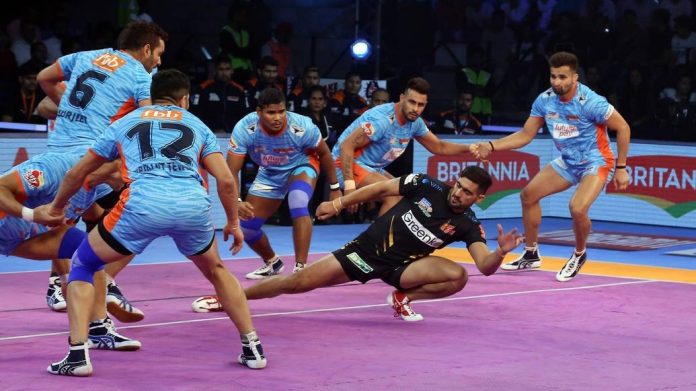 Bengal Warriors took their chances in the last minutes of the close conquest; Titans did not

Bengal Warriors are on a roll. After defeating Tamil Thalaivas, Warriors put Telugu Titans to bed with a convincing 30-25 win in the Vivo Pro Kabaddi Season VI yesterday.

However, it was a night to forget for Telugu Titans, as they failed to take their chances to clinch the match.

Maninder Singh, as usual, was in his raiding element for the Warriors. He led from the front, scoring 11 points to guide his teams to victory.

Rahul Chaudhari, on the other hand, could not make much impact on the match, with the UP player scoring a paltry two tackle points. To make matters worse, he even gave away a costly error in the last minute. That sealed any remote chances of his team making a sensational comeback.

In fact, it was their defense, rather than a star-studded (but underperforming) attack, that scored more points for Telugu Titans. This was the first defeat of the tournament for the south Indian outfit, although they still top the Zone B table. Bengal Warriors, on their part, climbed to the third spot.

A Sluggish First Half

In a slow half, it was the Telugu Titans defense that shined out the most with Abozar Mighani leading the line. Telugu Titans took the lead with Nilesh Salunke scoring a raid point. They led by a swift 2-0 margin.

Bengal Warriors, however, opened their account in the third minute with a tackle point. Star striker Jang Kun Lee scored his first raid point as Bengal Warriors led 5-4 in the 5th minute.

After 14th minute the teams were tied at 9-9. Towards the end of the first half, Telugu Titans commanded a 13-10 lead over Bengal Warriors.

Second Half – A Solid Comeback

It seemed like the tale of the first half would repeat again, until Bengal Warriors came out with all guns blazing. In the 32nd minute, Warriors’ Maninder first put them back in contention with two precious raid points. By that time they lead by 19-17. Rahul Chaudhari was an extremely quiet game, as he was sent to the sidelines once again by Warriors’ consistent defence in the 33rd minute.

In the crucial last minutes, it was Bengal’s defence that stood up, as Titan’s resiliently tried to make a comeback. They were defending a  point lead of 26-21. To see a twist in the tale, Telugu Titans defence sent back in form Maninder to the bench in the 39th minute, with the team trailing 25-27.

When it again came to Rahul Chaudhari to make an impact, he made a critical error which gave Bengal Warriors two points.

Today, Bengaluru Bulls will take on Tamil Thalaivas whereas U Mumba will entertain Haryana Steelers.

Monish Gadiya
Monish Gadiya is the Head of Content at KreedOn. He is a thorough tech-enthusiast and believes that innovation is the answer to all the problems prevalent in the society. Monish graduated from University of Pune with a degree in Civil Engineering before pursuing a post-graduate diploma course in intellectual property rights. A die-hard football fan, he has represented his college at various football competitions.
Previous articleBhaichung Bhutia: Bio, Net Worth, Achievements, Information
Next articlePraveen Chitravel wins India’s first Bronze at the Youth Olympics 2018

Meet the women pro kabaddi officials who are making us proud!