The Secret to Become the Best Batsman in the World

Cricket, and batting in particular, often requires one to exercise temperament and discipline to persevere for a long time. All legendary batsmen had a set of disposition, their own unique style of batting. To succeed at the highest level, a strong temperament is required. But a question arises – what is temperament anyway?

Temperament may be thought of an equal combination of the mental, physical and emotional traits of a player. However, to put it in simpler terms, temperament may simply mean one’s way of being.

Take any successful batsman, for instance, Sachin Tendulkar, VVS Laxman or Brian Lara. No two batsman will have the same style of play, although certain traits can be similar. It goes without saying to become a successful batsman one needs to have a style of batting like no other.

Thus, another obvious question arises. What are the essentials to develop as well as maintain a temperament that represents one’s authentic self?

The batsman perfectly knows that it takes only one ball for him to fail. Each delivery, as a result, demands an undivided focus. This is a tough test of character where you have to put everything aside. A form of trust is required from the mind and body to work together against a small projectile that could be propelled in any direction- all in a split second.
It’s a trust that should come from within and almost impulsively, without a second thought or hesitation. 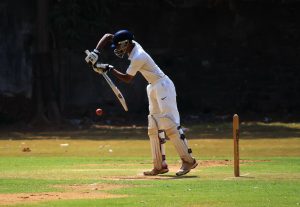 Legendary Australian batsman Don Bradman, in his famous book The Art of Cricket, elegantly illustrates how the ideal batting temperament may be achieved. According to him, there is a greater premium on temperament for a batsman than probably for any other player in any other branch of sport. The batsman is not allowed even a single error. In short, temperament rightfully represents the balance (or imbalance) of the mind-body equation.

Batting may be imagined as a form of meditation, considering the attention and concentration that it demands. One has to, thus, learn to keep his emotions under control, even if the course of the match may change in a matter of minutes. There is absolutely no chance of letting events affect your temperament, your style of play.

The batting techniques can be fine-tuned to perfection with immense practice. But the bigger responsibility is how and to what extent you utilize your skills on the pitch that matters.

In other words, initially, when the player starts to learn the cricket basics, most of the work is physical in nature and is broadly related to developing a muscle mem0ry for the sport. However, when one starts to mature and play in various competitive matches, most of the work is ‘mental’ in nature. This ‘mental’ responsibility is nothing but the player’s temperament. How one manages to conduct oneself and his mind throughout the match is impacts his performances.

Giving away a wicket is way easier than protecting it. That is exactly the reason why players like Rahul Dravid, VVS Laxman, and Sachin Tendulkar are considered as ideal batsmen in the world of cricket. All had a temperament to play each delivery with equal focus and attention, irrespective whom the bowler was or whether their team was in a winning or losing position.

However, nobody is perfect. Significant transformations in temperament can happen in a very short amount of time even to the best players. After all, we all are humans. This especially happens when things don’t go according to plans or there is intense pressure at a crucial moment. How one manages to handle his temperament in this critical moment will probably decide whether his team wins or loses. A batsman may experience fear of failure that may have an indirect impact on the body through stress, strain, contraction, tension or lack of energy.

The secret, thus, is easy and complicated at the same time – Control your mindset and you have a control over your game. If your mind wanders to past events or worries about future, shift your entire focus to present, to the moment you are playing in. This encourages an emotional rush in your body which grows stronger over time. The only thing that should be utilizing your mind on is the ball and nothing else.

Don’t overthink too much. Temperament demands strong layers of resilience so that one plays long enough irrespective of the number hurdles. Mental anguish is a part and parcel of the sport due to the brutal environment when playing the highest stage.

Overcome this, and you already are one of the best batsmen in the world!

Monish Gadiya
Monish Gadiya is the Head of Content at KreedOn. He is a thorough tech-enthusiast and believes that innovation is the answer to all the problems prevalent in the society. Monish graduated from University of Pune with a degree in Civil Engineering before pursuing a post-graduate diploma course in intellectual property rights. A die-hard football fan, he has represented his college at various football competitions.
Previous article
Sindhu Looks Confident Ahead of Premier Badminton League & BWF Tour Finals
Next article
Gautam Gambhir Announces Retirement from All Forms of Cricket

Gavaskar’s wicked take on Kohli’s revelation: What message did he want?...