Professions shouldn’t be classified on the basis of gender. Indian wrestler BB Bulbul had the courage to disagree with her family and become a wrestler instead of a teacher.

BB Bulbul: The Story so far…

As a kid, I enjoyed watching World Wrestling Entertainment (WWE) much to my aunt’s disdain who often complained that it wasn’t “lady-like” to watch wrestling. At that age, I did not understand much but it was fun to watch people punch and throw each other. Most of the pro-wrestler were men, but later I found out that some female wrestlers were quite popular too.  Soon there was a craze amongst Indian youth about Dalip Singh better known as The Great Khali. Everyone who while watching matches randomly picked a player to support, suddenly became diehard fans of Khali. 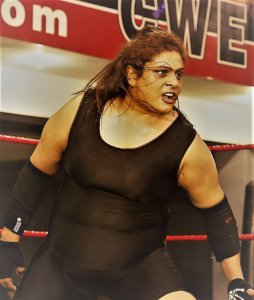 Those days, I wondered if it would be possible for an Indian woman to become a pro-wrestler. Sarabjit Kaur aka BB Bulbul has proved that yes, it is possible.

Sarabjit is a just like any other Indian woman who cooks and cleans. But her alter ego, BB Bulbul, isn’t your typical girl next door. Wrestling is everything for her, her purpose in life, her unique identity.

Everyone should have the opportunity to pursue a career doing something they love. Professions shouldn’t be classified on the basis of gender.Indian wrestler BB Bulbul had the courage to disagree with her family and become a wrestler instead of a teacher. I wonder how many Indians are unable to muster the courage to follow their dreams in the field of sports merely because of social pressure.

Wrestling takes a great deal of commitment, both physical and mental. BB Bulbul pro-wrestler is an inspiration for people who want to break the barriers of gender-assigned roles. Unyielding determination, hard work and love for what you do is all it takes to do something unique in life. People like her prove that no gender is stronger or weaker than the other.