The curious case of Basil Thampi is yet to become a complete circle, but already met great heights and falls. The world knew him at the 2017 IPL when he emerged as the best youngster of the tournament scalping 11 wickets from 12 matches for the now-defunct franchise, Gujarat Lions.

The very next season, he broke an unwanted record of conceding most runs in an IPL match against RCB giving away 70 runs from his four overs. Since then, the young pace bowler from Kerala failed to make an impact in the IPL but had some brilliant performances for the Kerala Cricket team in Ranji Trophy and other domestic tournaments.

This is the wobbly little tale of the 27-year-old Basil Thampi.

Let’s have a look at the life and style of this young rising speed gun of Indian cricket.

Kerala has not produced plenty of international cricketers. After Tinu Yohannan and S Sreesanth, Sanju Samson is the only modern-era cricketer from Kerala to play for the Indian side. Some of the talents like Sachin Baby and Sandeep Warrier strive harder every domestic season for a spot in the IPL but the kickstart Basil Thampi got in IPL is unparalleled by any of his Kerala teammates.

Tennis ball cricket is very popular in Kerala and he was an active player before turning to professional cricket. It is pretty much a batsman’s game where bowlers conceding anywhere around 10 an over is considered okay. There aren’t many options for bowlers as short boundaries and featherweight bats play against their favor. Bowlers in tennis ball cricket specialize in the safest ball to bowl in cricket – a yorker. He excelled in that particular skill and has been his go-to delivery in the professional circuit as well.

Hailing from a lower-middle-class family in Perumbavoor, Kerala, Basil was set to leave his cricketing dreams and help his family by doing a job in Gulf. While he was playing for a Chennai-based cricket Club named Globe trotters, former Indian fast bowler Tinu Yohannan found him. He took the young pacer to Chemplast Sanmar Club where he got an opportunity to bowl against established international cricketers like Dinesh Karthik, Murali Vijay, and Subramanium Badrinath. Those impressive net sessions and special interest was shown by Tinu Yohannan in his talent urged him to stay in India and pursue his passion.

As a novice, he trained under Aussie legend Glenn Mcgrath at the MRF Pace Academy. There, he developed as a full-fledged leather ball bowler with a deceptive round-arm action. Tinu Yohannan believed so much in the youngster and called him ‘natural talent’ when he started clicking around 145 kmph.

At the age of 20, Basil made his T20 debut for Kerala in the Syed Mushtaq Ali Trophy match against Hyderabad at Visakhapatnam. In the same year of 2014, he made his List A debut against Goa in Secunderabad and his much-awaited Ranji Trophy debut late in the year against the same opponents. For Kerala, he coupled with Sandeep Warrier to make a deadly fast bowling duo. In the 35 first-class matches played so far, Basil bagged 79 wickets with an average of 28.54. He is currently trying to resurrect his career by playing some amazing cricket in the domestic circuit. 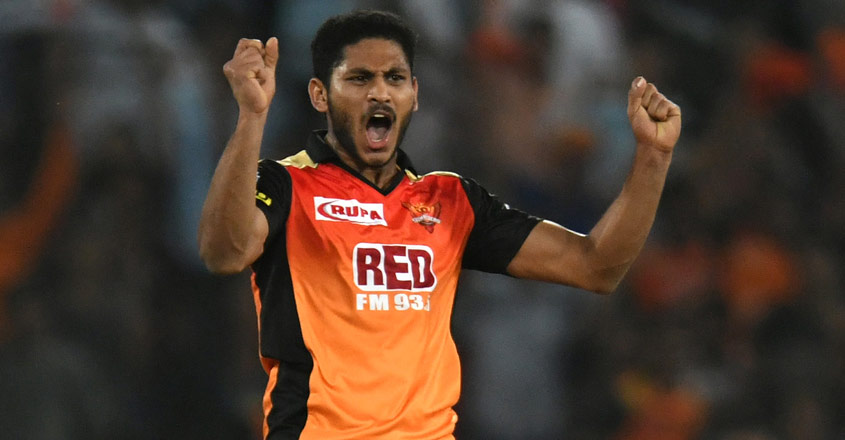 In 2017, Gujarat Lions bought him for 85 lakhs but no one predicted that he would go on to become the best bowler for the franchise the respective season. Basil proved his worth bowling meticulous toe-crushing yorkers one after the other. Though he wasn’t so good with restricting runs, at desperate times captain Suresh Raina turned to him to bowl those unplayable yorkers at the end of the innings. Even stalwarts of the game like MS Dhoni, Virat Kohli, Chris Gayle, and Kieron Pollard fell victims in front of Basil Thampi’s glorious bowling.

Seeing how good he was in the 2017 season, Sunrisers Hyderabad; the franchise which is known for buying top-class bowlers picked Basil for 95 lakhs the very next season. Unfortunately, it turned out to be a horrific one for the young prospect. Though he took 5 wickets from the four matches he played, SRH management dropped him from the playing XI due to his expensive spells. In the match against RCB, he conceded 70 runs in his four overs making it the worst spell in IPL history in terms of runs given away.

He featured in the next two IPL seasons as well but things never went his way since that match. It’s sad to see how the once emerging player award winner went into a downcast so quickly. But true talent always finds justice. All it takes is sheer hard work and the will to do so. Basil Thampi is undoubtedly a natural talent and it could be just a matter of time for him to rise again.

It is always a pleasure to stand besides you. You’ve always motivated me and pushed me to do my best. Thank you for your endless support.#SureshRaina • @ImRaina • #WhistlePodu pic.twitter.com/oEE15v82ud