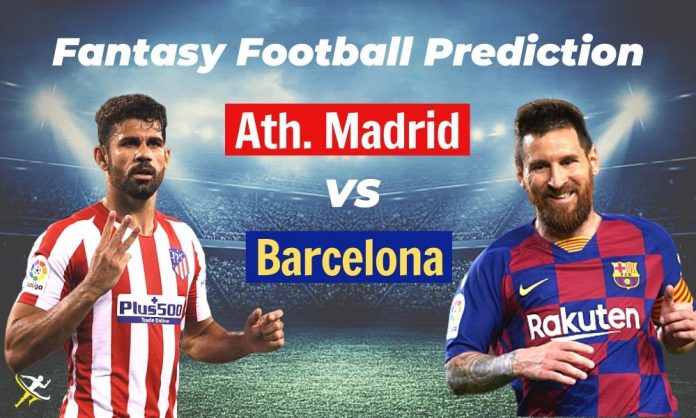 The semi-finals of the Supercopa de Espana brings will see a blockbuster tie between Barcelona and Atletico. The unique thing about the fixture it will be hosted some 6,000 kilometres away in the King Abdullah Sports City in Jeddah Saudi Arabia. The four-team tournament will feature other La Liga heavyweights Real Madrid and Valencia as the four teams will battle it out in the desert.


Barcelona began the new decade with a 2-2 draw against Espanyol. The La Liga champions will be aiming to claim the Supercopa trophy as well and will be fully aware of the potential Atletico Madrid carries in going forward.


The Red and Whites are only 5 points behind their neighbours Real Madrid and Barcelona in the league. They would want to claim the Supercopa just as much as the other competitors and will give their everything to try and go all the way to the finals.

With Marc Andre Ter-Stegen out for Barcelona, the 2nd best keeper in the fixture will be the highly-rated Jan Oblak. He will be making some excellent saves vs the Barcelona attackers on Friday night.

Gerard Pique and Jordi Alba form a fine partnership for Barcelona in the back. They will make life difficult for Atletico attackers coming at them. Kieran Trippier is a highly talented wing-back who can make some good forward runs and ping the ball into the box. These three players complete our 3-man defence.

A midfield trio of Frankie, Sergio and Ivan is one of the strongest this season and teams generally find it hard to break them down. Koke will have a somewhat busy game in the midfield to deal with the threat that Barca can carry constantly.

Luis Suarez and Messi are sure to make some defence piercing runs that will cause the Atleti backline a lot of problems. The duo is highly likely to score some goals on the night.

Joao Felix, the highly-rated teenage attacker, has been having a difficult time playing with the big boys. Given that its only his first season at Atletico, he will do good by trying to create chances with the absence of Diego Costa.

KreedOn Network
We are a team of sports writers who research about sports in India day in day out. Please reach out to us in case of any specific requirement of digital services on [email protected] .
Previous articlePrice list of top 15 Best Badminton Racket in India: Best Rackets to buy in 2022
Next articleHILARIOUS: Video of Virat Kohli imitating star ex-cricketer is going viral