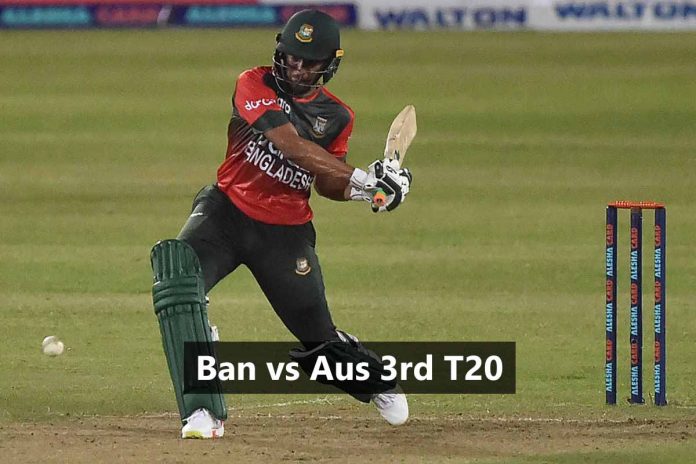 Ban vs Aus 3rd T20 Dream11 Prediction: Slowness in the wicket has gotten the better of Australia in their first-ever T20 bilateral series against Bangladesh. The home team, Bangladesh, has looked very comfortable in both matches. Bowlers particularly are getting their team through. They now need to win just one of the remaining three matches to claim the series.

Australia needs to work on its approach. If they bat first, they should be more patient and watch the ball carefully. A high score cannot be expected in these conditions. They need to set a par score for themselves and slowly try to get there.

Bangladesh is going strong and needs to maintain this level of gameplay throughout the remaining matches. They too have a scope of improvement in their batting. If they bat first, Bangladesh needs to get more runs on the board so that it becomes even more difficult for Australia to chase down the target.

Matthew Wade- With the added responsibility of captaincy, Wade needs to score runs in the middle order. He is a very handy batsman at the top, and he scores at a quick rate. He is a powerful striker of the ball and is never afraid of taking on any bowlers.

Nurul Hasan- He is in this squad replacing Mushfiquir Rahim. These are huge shoes to fill. How well he takes hold of this opportunity is up to him no make a spot in the upcoming T20 World Cup.

Moises Henriques- A genuine striker of the ball, who has gotten the chance to bat a little higher in the batting order in this series. He looked good in the second match and would want to continue batting similarly.

Mitchell Marsh- Marsh had a brilliant white-ball series against West Indies, he was the only player in the T20 matches who score consistently. He was also able to take a few wickets with the ball. His form in this series also has been very impressive and surely is their best performer in the two matches played.

Shakib Al Hasan- Shakib is Bangladesh’s most experienced player. After his spell of poor performances, he has redeemed himself in this series. He still needs to convert good starts into big scores.

Nasun Ahmed- After a brilliant four-fer in the first match, Ahmed did not pick any wickets in the second match. He was still economical, and he would take that as a positive.

Shoriful Islam- In this series, Islam has been consistent with the ball. He has picked a couple of wickets in both matches. Islam is a young player and has a long way to go. How well he manages himself and his performance for the rest of the series will be interesting to see.

Mitchell Starc- Starc has been decent with the ball, but in the second match, he did not have much to defend. He is one of the top bowlers in the world and is not getting great results because he does not have support from his teammates.

Josh Hazlewood- He is a part of one of the best bowling trios in the world, Starc, Hazlewood, and Cummins. Along with Starc, he too is delivering well but is not able to get his team a win because of the same reason.

Mustafizur Rahman- After injuries and a dip in performances, Mustafizur Rahman had a chance to redeem himself in this series, and he has done exceedingly well so far. He picked up wickets in both matches when the conditions were not in his favor. He would like to go ahead and win the series for his team.

KreedOn Network
We are a team of sports writers who research about sports in India day in day out. Please reach out to us in case of any specific requirement of digital services on [email protected] .
Previous articleSports in Olympics | Know About All Olympic Sports
Next articleDevendro Singh Biography: Story of the talented young Indian Boxer