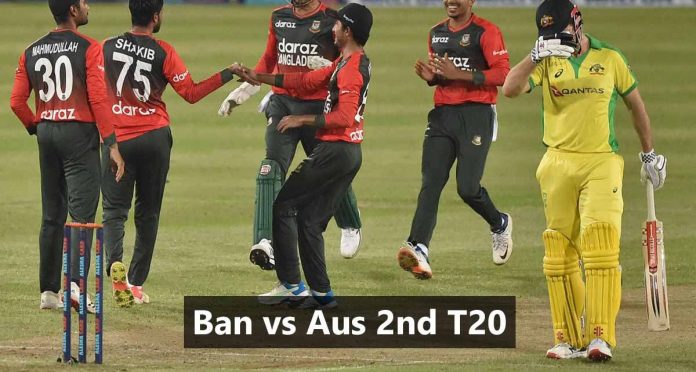 Captain Mahmudullah said that execution will be the key against Australia, and that is exactly what they did. Despite having a low score on the board, Bangladesh managed to bowl well, and the spin department did the trick for them. Nasum Ahmed picked up four-fer four his team and won them the first match, to take a lead in the series. KreedOn brings you the complete Ban vs Aus 2nd T20 dream11 Prediction.

Australia now needs to figure out what has been going wrong for them and make sure they come back stronger in the next match. They possess a good pool of talented players, they are one of the few teams that have the strongest bench strength. They would want to level this series.

Bangladesh made a mark by defeating one of the strongest sides in their first-ever bilateral series against Australia. But the job is not yet done, they still need to claim the series. They should not get carried away by this win, and try to execute their plans to perfection.

Matthew Wade- With the added responsibility of captaincy, Wade needs to score runs in the middle order. He is a very handy batsman at the top, and he scores at a quick rate. He is a powerful striker of the ball and is never afraid of taking on any bowlers.

Nurul Hasan- He is in this squad replacing Mushfiquir Rahim. These are huge shoes to fill. How well he takes hold of this opportunity is up to him now to make a spot in the upcoming T20 World Cup.

Alex Carey- In the series against West Indies, Carey did not get any chance in the T20 match, but his form in the ODI matches was good, and he won them the series as well. He has gotten the opportunity at the top of the order and needs to make the most out of it.

Mitchell Marsh- Marsh had a brilliant white-ball series against West Indies, he was the only player in the T20 matches who score consistently. He was also able to take a few wickets with the ball. He continued his form in the first T20 as well.

Shakib Al Hasan- Sakib is Bangladesh’s most experienced player, but he has not performed that well recently. In the first match, he scored the most runs for Bangladesh in the first innings. He also picked a wicket in the second innings.

Nasun Ahmed- Along with a little support from other bowlers, Nasun Ahmed bowled out Australia for just 108 runs while defending a low total. He was the pick of the bowlers for his four-fer. We would wish to have a good game this time too.

Shoriful Islam- Islam is a young player and has a long way to go, but in the series against Zimbabwe, he was the pick of the bowlers. How well he manages himself and his performance against Australia will be interesting to see.

Mitchell Starc- Starc is one of the best bowlers in the world, and he has been in that position for a few years now. He got 2 wickets in the first match but was not very economical. He will want to change that before the start of the T20 World Cup.

Josh Hazlewood- He is a part of one of the best bowling trios in the world, Starc, Hazlewood, and Cummins. He showed why he is amongst the top bowlers in the world by picking 3 wickets in the first match.

Mustafizur Rahman- He was amongst the top bowlers in the world, but due to injuries, his performance has deteriorated. He started well in the first match and needs to continue doing so in the rest of the series.

KreedOn Network
We are a team of sports writers who research about sports in India day in day out. Please reach out to us in case of any specific requirement of digital services on [email protected] .
Previous articleIndia At Tokyo Olympics 2020 | Wrestlers Ravi Kumar & Deepak Punia on a roll
Next articleIndia at Tokyo Olympics 2020 | High Drama & Glory For India in Boxing, Athletics & Hockey on Day 12