Volleyball player Balwant Singh affectionately known as ‘Ballu’, was the captain of the Indian Volleyball team. With memorable achievements in his pocket, he has left his mark in the history of Indian Volleyball. Born in a small village named Kaul in Haryana, Sagwal won hearts all over the country.

Ramana Rao(Director, FIVB Regional Development Centre), his former teammate, in an interview recalled, “Ballu was an outstanding player for the country and can be termed a world class attacker. He was a fighter to the core.”

Balwant Singh Sagwal aka Ballu was a tall, clumsy boy in his growing up days. Physically he was 6 feet 6 inches tall (1.98 m) with correspondingly big hands and feet. Coming from a compromising financial background he joined the Border Security Force (BSF) in Jalandhar, Punjab.

BSF has always had a reputation for producing quality volleyball players and Balwant Singh was no different.

At the first National Volleyball Championship participated by Sagwal in 1965 and continued to play in the Nationals till 1988. During 1968 and 1981 timeline Punjab won National Championships an astonishing 10 times. This winning run was largely due to gallant efforts of Balwant Singh Sagwal.

Ballu also participated in the All India Police Games from 1966 to 1990 representing Punjab Police and BSF. 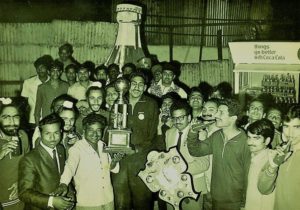 Ballu is credited for Punjab’s success in the sport. Destiny drove him towards joining the Border Security Force, in Jalandhar, which was known for producing quality volleyball players at the time. After training there, his remarkable career began at the national volleyball championship in 1965. Armed with his talent, the star player continued to play the nationals till 1988. The 6 feet 6 inch player helped Punjab win the National Championships ten times. His stellar performance earned him an opportunity to represent India in Asian Games of 1970, 1974, and 1978. He also played test matches for India in 1970, 1978 and 1980 as well as in the All India Police Games from 1966 to 1990.

In 1972, his consistent performance, sportsmanship and role in the national team earned volleyball player Balwant Singh the country’s top sporting honour, the Arjuna Award. He opened an academy which is still carrying his legacy. A stadium was also named in his honour. The outstanding player drew his last breath at the age of 65 on 14th November 2010.His son Narender plays for Indian volleyball Team and is taking the legacy forward.

Our nation has produced some brilliant sports players in the past, but they got vanished in the history pages. Let’s spread awareness about these unsung legends and the ones who are in the making such as Khushi. Follow the link to know more.

KreedOn Network
We are a team of sports writers who research about sports in India day in day out. Please reach out to us in case of any specific requirement of digital services on [email protected] .
Previous article
Atita Verghese – First Professional Skateboarder From India
Next article
Kavita Chahal – A rare jewel of boxing India

Meet The Top 12 Most Famous Volleyball Players In India

Meet The Top 12 Most Famous Volleyball Players In India