Baichung Bhutia, the Sikkim sniper, as he was called throughout his long two decade career stood out amongst his peers and became the legendary footballer of modern India. He came to be known as the poster boy of  Indian football Team all over the world. Born on December 15, 1976, in Tinkitam, a small village in south Sikkim,  Bhutia was a top-class athlete as a kid and along with football also played Badminton and Basketball. His parents got concerned with his obsession for soccer as he wasn’t paying enough attention to studies. But his Uncle Karma Bhutia kept encouraging him and helped him get a Scholarship at the Tashi Namgyal Academy in Sikkim. He impressed one and all with his abilities there and soon made it into the SAI centre in Gangtok. That was just the beginning, rest is just history. 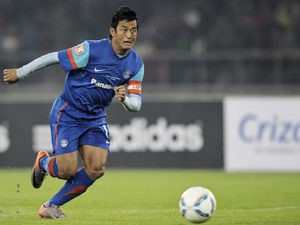 Baichung Bhutia started playing as a striker and caught the attention of everybody for the first time at the Subroto Cup 1992 held at Delhi, wherein he was bestowed upon the Best Player award. Bhaskar Ganguly, the former goalkeeper of the Indian Football team was especially impressed by his talent and supported him to move ahead to professional Football. On the field, Bhaichung continued to impress and made rapid strides. In 1994, he top scored in the Kolkata first division for East Bengal club with a healthy return of fourteen goals, also won the best player in the league awards. Baichung Bhutia got transferred from East Bengal to the ambitious JCT in 1995. With them he won the first ever National Football League (now known as the I-League) in 1996-97, again winning the Golden Boot as he scored 14 goals in 20 appearances. He added the accolade of the “Indian Player Of The Year” to his now growing personal trophy cabinet in 1996. The new wonder-kid on the blocks was duly given his first International call-up against Uzbekistan in the Nehru Gold Cup. He created history by becoming the youngest player to have ever scored for India by slotting home the winner against the Uzbeks. He was just 19 at that time. 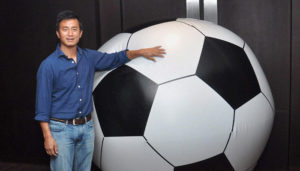 in the year 1998-99. In the Semi Final match of the 1997 Football Federation Cup played between East Bengal and Mohun Bagan, Baichung scored a hatrick and led East Bengal win the match by 4-1. Bhutia has been the only Footballer ever, to score a hatrick in a Football match between these two arch rivals. The same year, he earned the recognition of being the Highest Scorer ever in any match of the National Football League. In the year 1999, Baichung Bhutia began playing for an English Football club named Bury F.C. He played for the club till the year 2002. With India, he continued to scale great heights, as he starred in the LG Cup triumph over Vietnam in 2002. He scored two goals in the finals and won “the man of the match” award. On the personal front, in another milestone in his flourishing career, he was awarded the “Asian Player Of The Month Award” in May 1999 and in October 2002. Upon his return to India in the year 2002, he played for Mohun Bagan AC for 1 year and then again moved back to his initial club, East Bengal and played for them until he reverted back to Mohun Bagan in the year 2006. In the meantime, he also played for Perak, a Malaysian Football club. Bhutia finally retired from International football and hung his boots in the year 2011. 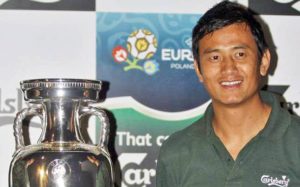 Our country is yet to produce a footballing legend like him. But we believe that with the current state of football development in the country we will see 100s of Baichungs, who will craft the golden era for Indian football. One such boy who has taken the world by storm is Sunil Chetri.

KreedOn Network
We are a team of sports writers who research about sports in India day in day out. Please reach out to us in case of any specific requirement of digital services on contact@kreedon.com .
Previous articleBudhia Singh: The Pocket Sized Dynamo
Next articleDattu Bhokanal – Indian Rowing Hero