From running barefoot to having her name on Adidas shoes, Hima Das sure has come a really long way. From practicing in muddy football fields to winning three medals at the 2018 Asian Games, her journey is remarkable. What makes her stand out is her intense passion and raw talent. Some stars are born with a sparkle in their veins. Similarly, this sprinter is here to attain great heights. Shortly, Hima Das has become the nation’s latest sensation. The best part? She deserves all the adulation coming her way. Today, we glimpse into the life of our young champion.

The Story of Hima Das 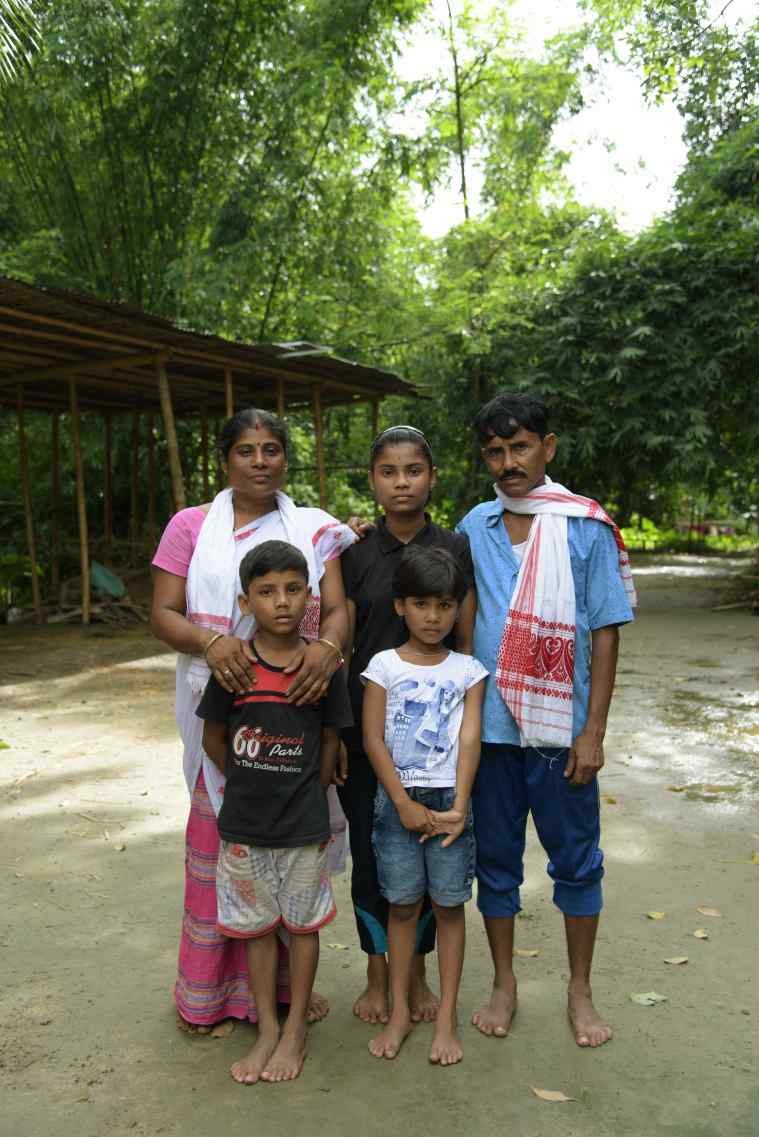 Hima belongs to a humble family from Nagaon Assam. Her parents, Jonali Das and Ronjit Das are rice farmers. She is the youngest of their five kids. Moreover, things were never abundant as such at home and Hima did not have the luxury to choose a career in sports. However, she believed in her raw talent and trained on muddy football fields.

“I played for local clubs as a striker and I thought maybe one day I would play for India,” she said while speaking to ESPN.

Destiny had different plans for the young champion and a career in football was never the plan. Finally, she was spotted by Nipon Das, an athletics coach with the Directorate of Sports and Youth Welfare. On his insistence, she shifted to Guwahati and started training hard. As a matter of fact, the better infrastructural facilities helped her tremendously.

“She was wearing cheap spikes but she won gold in the 100 and 200. She ran like the wind. I hadn’t seen such a talent in ages. There was no separate wing for athletics but the officials were open to Hima being part of the academy after seeing her performances. Assam is not known to produce runners,” he told DNA India. 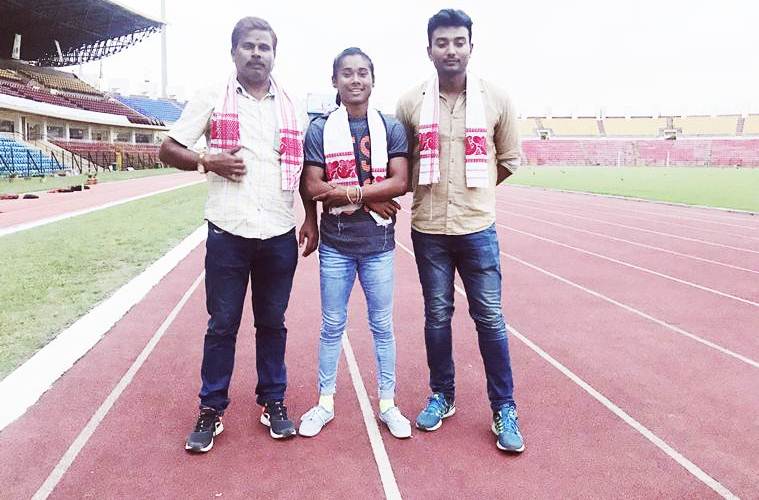 Before any tournament, Hima calls her coaches to seek their blessings. As shown above, Hima with coach Nipon Das and coachNabajit Malakar.

On his insistence, Hima shifted to Guwahati and started training hard. The better infrastructural facilities at Sarusajai Sports Complex helped her tremendously. It wasn’t easy for her parents though. Her mother, who hasn’t even traveled out of the village, was especially hesitant to send her youngest ward away. Hima convinced her mother, in her own bindass style, that she isn’t afraid of another and will come back running to her if something happened.

However, those days were not easy for Hima. There was always a monetary crunch and she had to live in a rented room. Moreover, there used to be leakages during monsoon. Nothing could stop Hima from reaching the race track on time. Her coaches were very impressed with this quality of hers.

Hima’s first competitive race was the Inter-district meet in Sivasagar, Assam. In just 18 months she won her first track gold medal in the 400-meter final at the World U20 Championships in Tampere, Finland. With this feat, she significantly became the first Indian woman to achieve this honor! She trumped out Romania’s Andrea Milkos and America’s Taylor Manson in the event.

Hima Das creates history by winning Gold medal in 400m of World U20 Championships. She is 1st Indian athlete to win Gold in track event of U-20 World Championships. You have made ?? proud. #NariShakti

At the Commonwealth Games 2018 held in Gold Coast, she clocked 51.32 seconds in the 400m final. Though she had to settle for the sixth position, it was a start of new milestones for Hima. Later, her sensational performance in the Jakarta Palembang Asian Games sealed her position as an exceptional sprinter.

Unforgettable moments from @HimaDas8’s victory.
Seeing her passionately search for the Tricolour immediately after winning and getting emotional while singing the National Anthem touched me deeply. I was extremely moved.
Which Indian won’t have tears of joy seeing this! pic.twitter.com/8mG9xmEuuM

She got a penalty for a false start in the 200 meters semifinal event. It was very disappointing as she was sure of a podium finish. She later explained in an interview with the Hindustan Times that she was under a lot of pressure.

“There was a lot of pressure on me. I request all not to put players under such pressure. Some comments hurt us. So please refrain from making such statements. It’s because of two-three persons from Assam. However hard I try to forget, those things (comments) come to mind and make me think did I commit any wrong,” she said.

On the positive side, she made up for that by winning three medals in other events. She won a silver in the women’s 400 meters category. Another silver came in the mixed relay event. The team of Muhammed Anas, Hima Das, Poovamma Raju, and Arokia Rajiv clocked 3 minutes and 15.71 seconds to achieve this feat.

But, Hima got her most special medal in the women’s 4x400m relay. The girls made the entire country proud by winning the fifth consecutive gold medal in the relay. Indian women’s team is ruling the event since 2002 Busan Asiads. Hima was totally thrilled to be part of this team along with Saritaben Gayakwad, Vismaya Koroth, and Poovamma Machettira. Hima started the race and gave her fellow teammates a considerable lead over their opponents. They markedly finished the race in 3.28.72 seconds to clinch the gold.

Her bindass spirit, fiery as well as chilled outlook at the same time, and immense passion for running make her stand out from the rest. After all, she was never the one to head down the conventional path. She knows she is made for greater things in life. Surely, not the one to chase medals or titles, she has focused on consistently improving her performance.

“The only thing I fear is time. I am not running after gold medals, I am running after time. And once I get that, gold medals will run after me. When I am on track, I am a different person. All I know is that I need to run. The people around me could be Olympian gold medalists. But I don’t take tension. If I do, how will I run my race?”

This need to run is going to take Hima to exciting places and win her numerous accolades. Best of Luck Hima – Go for Glory!!

Vardan Pandhare
Vardhan is an author who loves creativity. He enjoys experimenting in various fields. After completing his graduation, he was sure about one thing! His love for sports. He is now living his dream of being creative with words in the field of sports. He has since then always brought the latest news and updates for all the sports fans.
Previous articleSeema Punia books Commonwealth berth via Fed Cup
Next article7 indian women athletes who are making India Proud

Indian athletes have had a wonderful 2019. Some of the proudest moments of the year were the Men in Blue’s triumph in Australia, Deepak Punia’s...
Read more
Athletes

Sachin Tendulkar career was close to getting finished years before he eventually retired! At the start of the 2005-06 season, the God Of Cricket...
Read more
Athletes

A Comprehensive Diet Plan & Workout Routine of Sania Mirza to...