The Indian Men’s Hockey team maintains a top spot in the pool stage of the Men’s Asian Hockey Champions Trophy, as they defeat South Korea by 4-1 in Sultan Qaboos Sports Complex here in Muscat, on Wednesday. Harmanpreet secured a hat-trick in the 5th, 47th and 59th minute of the game. With this, she becomes tournament’s third player to score a treble.

India’s Dilpreet Singh and Pakistan Aleem Iqbal are the two other players who have registered fantastic hat-tricks in the tournament.

This defeat resulted in the elimination of Korea out of the semi-final contention. India’s Gurjant also scored a goal in the 10th-minute strike which along with the hat-trick by Harmanpreet, lead the way to India’s victory and top spot in Pool Rankings.

How it became India’s winning game?

Right from the beginning, the Indian team maintained their possession and was soon awarded their first Penalty Corner in the 5th minute of the game. Harmanpreet, quickly and fiercely struck the ball in the top right corner, thus giving the team its lead. 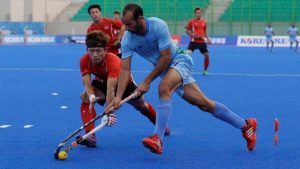 The second quarter began with the Indian side trying to dominate yet again. But soon, South Korea came forward to open their account as they scored in the 20th minute of the game. The Korean captain struck a fabulous shot to beat P R Sreejesh and converted the score to 2-1.

Just two minutes after this goal, the Korean team was able to win their first Penalty Corner but was blocked by the Indian squad. Besides, both the teams could not take advantage of their chances to secure goals in the first half and India took their 2-1 lead to the interval.

It was Harmanpreet’s goals in the second half that decided the fate of the game. “I feel the happy the way I am shooting the penalty corners. I just focused on the job and the goals came”, expressed Harmanpreet. Coach Harendra Singh also praised the athlete, “He is one of the best penalty flickers in the game.”

The four semi-finalists have now been almost decided but the league standings are still to be finalized after the last preliminary round matches will be played by Malaysia, Pakistan and Japan on Thursday.

India maintains its top spot with 13 points, which is followed by Malaysia with 10 points, Pakistan with 7 and Japan with four points.

The host Oman is yet to score a point in this championship still has a game to play against Japan.

Bhawna Kothari
Lover of cultures, varied colors, and underdogs, Bhawna is a by-heart and professional playwright. Hailing from a journalism & communication background, she incorporates a careful study at both flips of the coin which is essentially required to be analytical in thoughts and words. Actively abreast of the current affairs around the globe, she likes knowing and bringing into light the unexplored. Problem solving via the power of content is what inspires her and hence KreedOn, a platform created for the betterment of sports ecosystem in India, is now her happy workplace!
Previous articleJwala Gutta Biography: Story of India’s Most Successful Doubles Shuttling Star
Next articleIndia vs West Indies 2nd ODI: ‘Magical’ Virat Breaks Records as an Inspired WI Tie