Before  Saina and Sindhu entered the badminton court, there was another star who dominated the field for years. And mind you, she did sit o very consistently. She was one passionate girl who turned into a successful woman. Aparna Popat is undoubtedly one of the best badminton players the country has seen.

In a career spanning around seventeen years, she has added numerous titles to her tally. She has always played with dignity and shown class since a young age. Like every sportsperson, she has had her share of ups and downs, but she did not let those deter her. Even amidst some controversies, she stood by her principles and came out stronger.

Today let us get a glimpse of this badminton champion who made headlines at every stage and made the entire country proud because of her achievements.

Aparna was born in a Gujarati family based in Mumbai. Her parents, Lalji and Heena Popat supported her passion for badminton ever since she was just a kid. She joined Anil Pradhan’s coaching at the tender age of eight. Pradhan hardly took any time to realize that this girl isn’t ordinary. He told her parents, “Give me this girl and I will put her on the map of Indian Badminton.”

And so he did! She became the face of badminton in India during her stellar career of 17 years. Aparna can be called the undisputed queen of badminton. In 1994, Aparna moved to Bangalore and started training at the Prakash Padukone Badminton Academy. The champion himself coached her there and her game improved tremendously.

The third coach who played a major role in shaping her career was Gangula Prasad. He trained her when she moved to the Sports Authority of India’s training centre.

In 2011, Aparna Popat married Rajeev Ved, a management consultant from Bangalore. The couple met in 2010 on a blind date and was immediately attracted to each other. In 2014, they were blessed with a child. After a stellar badminton career, she is now settled in this blissful stage of her life.

In 1996 Aparna won a silver medal at the Junior World Championships held in Denmark. By doing so she got India its first medal in the event.

Aparna’s first Senior National title came in the year 1997. She displayed immense class and defeated Manjusha Kanwar in straight games. Since then, she won nine consecutive titles. She completely dominated the game until 2006, when she retired. Aparna shares the record of nine consecutive national titles with the legendary Prakash Padukone. 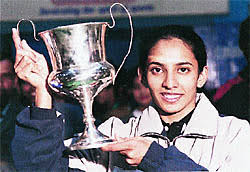 At the 2000 Sydney Olympic Games, she was the only female Indian badminton player. Aparna has also participated in the Asian Games.

Her second CWG medal came in 2002 Manchester Games. She won a bronze then. In the 2004 Athen Olympics, Aparna reached the pre-quarter stage and became the only woman badminton player from India to make two Olympic appearances.

In the year 2006, Aparna was at the top of her career. She was the number one player in the country. She even won her third Commonwealth Games medal in team championships. However, an undetected wrist injury halted her journey. Aparna decided to retire then

The year 2000 was probably the worst year of Aparna’s career. Simple cold medicine landed her in a big mess. She was tested positive for dope and was banned for three months after that.

“My entire self-belief was shattered. I began to doubt whether all that I had achieved till date was because of my talent and hard work or simply due to the drug,” Aparna told Mid-day.com. It was a very difficult period for her.”

In 2012 Aparna attended a sports mentorship programme organized by the US Department of State and ESPN. Known as the Global Sports Mentoring Programme, its main objective was to create ‘sustainable sports opportunities for underserved women and girls worldwide’. Aparna got the honour of being one of the 17 shortlisted members. The then US Secretary of State Hillary Clinton was personally involved in it. In an interview with the Sportskeeda, Aparna shared her experiences.

“It was an intensive programme. We worked non-stop for a month. The first five days were in Washington DC, where we were given basic information on how this programme works. We were assigned to one prominent woman each. They gave us an overall view of sport – how a sport is used in social causes, in schools, colleges, how funds are raised, and so on. We learned so much about how they use sport. They wanted to see how we could implement it in our own country. There were a lot of meetings and discussions of ideas.”

Success has this amazing quality of getting right into our heads. It is easy to become successful once, but consistently staying successful takes a lot. Right from the beginning of her career, Aparna was sure about one thing, she will never take anything for granted. As she continued winning one tournament after another, she was simply concentrating on bettering herself. It is not easy to win nine consecutive nationals after all!

The hunger to keep on performing better helped her take giant strides towards victory. Her career is the perfect example of balance. At the face of defeats or minor setbacks, she always maintained mental balance. She retired from badminton when she was the number one Indian player. Aparna Popat was humble, talented, inquisitive, hard-working, and a true champion. In conclusion to this piece, here’s an inspiring excerpt from her interview with Live Mint.

At no time is self-control more difficult than in the time of success. It is almost too easy to walk on air, feel invincible and take success for granted. It is tempting to latch onto all the praise and the adulation can get addictive. If one is not careful, this can take away focus from the game. Failures motivated me to work harder and smarter. The more honestly I assessed the reasons for the setback, the easier it was to find a solution and improve, so that I could continue winning. Not being complacent, the hunger to learn more set the tone for my career. The goal was clear—I aimed to be a better player than I was yesterday. Be the best that I could be.

Our real competition is never just the opponent. If we strive to better ourselves at every stage of our life, we will conquer anything. Aparna’s message isn’t just for those who play any sport, but for every individual. Every difficulty in life has a solution. All you have to do is find it. We are sure Aparna is still inspiring everyone in her current role. Moreover, the wisdom she has displayed right from her twenties is commendable. We hope her story will inspire more Aparnas. Till then, cheers!

Aparna Popat was born on 18th January 1978 to Lalji Popat and Heena Popat in Maharashtra’s financial capital of Mumbai. She did her schooling at the J. B. Petit High School in Mumbai and her Pre-university course from Mount Carmel College, Bangalore. Aparna then successfully completed her bachelor’s degree in Commerce at the Mumbai University.

In 2011, Aparna Popat tied the knot with Rajeev Ved, who is a business consultant based in Bangalore. Ved had been in the USA for over 20 years before he decided to relocate to India. He met Aparna through common friends.

‘Sport is a universal language, that is extremely powerful. To promote the positive and constructive values of sport is extremely essential. The #WhiteCard campaign does that beautifully on a global scale. Raise your #WhiteCard‘, I have raised mine. pic.twitter.com/Ub4rtVHMRg

Mamta Thatte
A passionate foodie, a versatile writer, and now a sports enthusiast, Mamta is always open to exploring new avenues. She has a vast experience in Web Content Writing, Editing, and Social Media Management. A self-confessed coffee and dark chocolate addict, she believes in following her heart and giving her 100% into everything she does.
Previous article
Mary Kom Biography: The Magnificent Story of India’s Legendary Boxing Star
Next article
India Risks Losing Out on Hosting Big-Ticket Events in Future

10 Best Badminton racket under 1000 in India

Chetan Anand Biography: A Humble Badminton Star who Dominated the Game for Years

10 Best Badminton racket under 1000 in India