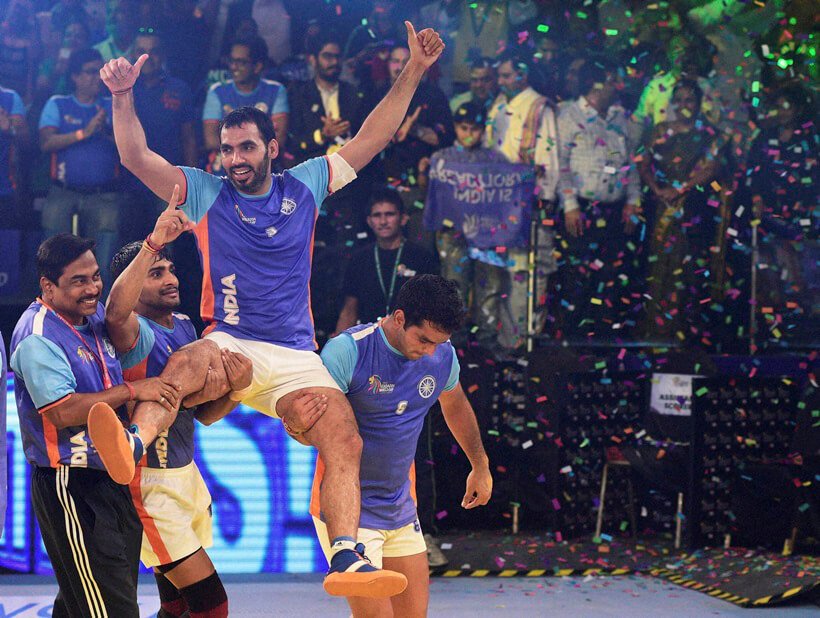 An open field filled with sand and the will to push your body across the line is what Anup Kumar stands for. That’s all you need to do in the action-packed game of Kabaddi. Keeping in mind that the sport was originated in India, our players have been doing very well to uphold its reputation.

You can find people playing Kabaddi in almost every village. Now the sand has been replaced by mats, the crowds of spectators have multiplied and the players are finally getting the recognition they deserve. A player instrumental in bringing this change and being the face of the sport all over the world is Anup Kumar. The captain of the Indian Kabaddi team, Anup Kumar has been India’s marquee player for over a decade now.

Anup Kumar was born on 20th November 1983 in a village called Palra, Gurgaon. His father served as a Subedar Major in the Indian Army. As is the trend in Haryana, Anup started playing Kabaddi in his spare time at school. Anup and his friends used to steal honey from beehives and evade the guards later on. Perhaps, it was this practice of evading people that led him to become one of the best raiders in the game.

Soon, at the age of 17, he started taking the sport seriously and participating in tournaments. During one such tournament, his immense talent and dedication caught the eye of Amarsingh Yadav, coach of the CRPF Kabaddi team. In 2005, he joined CRPF as a constable and was also selected for the Delhi team.

A rare mixture of natural talent and sheer dedication, Anup Kumar quickly made his way to a national camp in 2005. He made his debut with the national team in the 2006 South Asian Games held in Sri Lanka. Since then, Anup Kumar was a regular member of the national side. He won various tournaments with the team and was the recipient of many words. The most prominent of his accolades were the 2010 and 2014 Asian Games gold medals.

Anup Kumar serves as the Deputy Commissioner of Police in Haryana. In 2012, Anup was bestowed with the prestigious Arjuna Award. His talent and dedication towards the sport were recognized and he quickly rose to become the vice-captain of the national team under Rakesh Kumar. Eventually, in 2016, he was appointed as the captain of the Indian Kabaddi team.

The defining moment for the sport and its players came in 2014, with the inception of the Pro Kabaddi League. One of the most ancient sports in India had been infused with glamour and presentability. As a consequence, huge crowds of people were drawn to the indoor stadiums and the sport of Kabaddi rose towards fame.

Anup Kumar won the award for the Most Valuable Player in the first season of PKL and captained his team, U Mumba to the position of runners-up. In the second season, they went a step further and became the champions. U Mumba also went to the finals in the third season.

With over 377 raid points from 938 raids, Anup Kumar is the best raider of the league so far. His immense talent and popularity are proportional with his earnings as he is one of the highest paid Kabaddi players in the country.

There was just one thing that was amiss in Anup’s dream career and that was the title of the Kabaddi World Cup. Anup fulfilled this dream in 2016 when he led the Indian side to the title of World Champions.

From evading watchmen of orchards to evading defenders at the world stage, Anup Kumar has come a long way. He is now the brand ambassador of the sport and realizes the weight of this responsibility very well. Anup Kumar is also a prime example of how dreams can be fulfilled with the right amount of hard work, determination, and talent.

nikhil
Nikhil is a man of many words. A reader and a writer, he'll read just about anything to satiate the urge. His journey into the literary world started as a young journalist who worked for The Times of India during his school days. Now, you'll usually find him in the corner of a room; engrossed in a book, typing furiously or simply daydreaming at the best.
Previous articleThe key to Virat Kohli’s ODI records
Next articleAdvancement of Indian Shooting over the years since independence