Annu Rani – The Torchbearer for Indian Women in Athletics

Bars are being set high, numerous records are being broken and more young talent is being identified at the grassroots level in our country. A fair share of credit for this development goes to the women athletes of our country, Annu Rani is one of them. Breaking the societal norms in our country, women are actively participating in sports and are gaining recognition for their efforts. Amongst these athletes is Annu Rani who has been a torchbearer for women in athletics over the years. She is currently India’s best javelin thrower and is constantly striving to break her own records.

Annu Rani was born on 28 August 1992 in Bahadurpur, Meerut. The extraordinary strength in her arm was 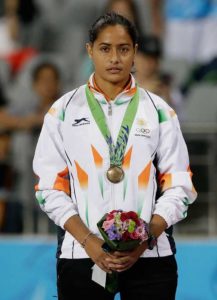 identified at a young age by her brother, Upendra. He realized this during a cricket game with family members when Annu easily threw the ball while fielding at the boundary. Being a long-distance runner himself, Upendra thought of placing a javelin in his sister’s hand. He started training Annu making her hurl sugarcane stalks in empty fields. A problem that they faced was that Bahadurpur was a conservative village. Women in their village use to stay behind veils and would seldom leave their houses. Disregarding all the societal pressure, Annu used to train rigorously.

When she started getting serious about taking up sports as a career, she wasn’t supported by her conservative father. During her school days, Annu used to walk 8 kilometers a day balancing between her studies and practice. She was a strong girl and could throw the javelin up to a distance of 25 meters during her middle school.
Annu trained by herself and started participating in district and state meets. Seeing her progress at the junior level, her father realized her dreams and potential. He started encouraging and accompanying her to various meets. Her performance at one of these meets caught the eye of Kashinath Naik, a former athlete-turned-coach. Kashinath had won the bronze medal at the 2010 Commonwealth Games.

Kashinath was eager to take Annu under his wings and train here for the international stage. But this would mean that Annu would have to attend coaching camps and stay away from her home. Eventually, Kashinath convinced her family and Annu officially became his student in 2013.

Under Naik’s coaching, Annu moved to the National training camp in Patiala. Annu began training and worked hard for the National Champions. Soon enough, she broke the National record with a throw of 58.83 meters 2014 National Inter-State Championship in Lucknow. With her throw, she qualified for the 2014 Commonwealth Games where she finished eighth with a best of 56.37 meters. In 2014, at the Asian Games in Incheon, South Korea, she won the bronze medal with a throw of 59.53 meters. Thus, Annu Rani fulfilled her dream of bagging a medal at the International stage. The throw also resulted in breaking Annu’s personal and national record which she held previously.

Annu broke her own national record again at the 56th National Open Athletics Championships in September 2016. She created a new record with her throw of 60.01 meters by breaking her previous national record of 59.87 meters. She also became the first Indian woman to cross the 60 meters mark and broke four national records in two years. 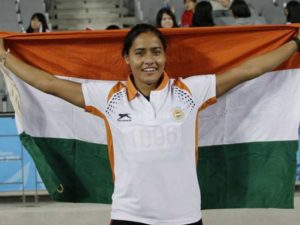 Annu Rani stands at 5.5’’ tall; a height which is generally considered as a detriment for javelin throwers. But coach Naik didn’t let this stand in her away and Annu started practicing with javelins weighing 800 grams (the average javelin weighs 600 grams).

Since 2016, Annu has trained completely hatke (differently). She now focuses more on sprinting and also strength training. She has reached a distance of 63 meters in her training which is a distance that wins medals at the Olympic Stage.

Recently, on 4 June 2017, Annu clinched the gold medal at the Federation Cup National Senior Athletics Championships with a record throw of 61.86 meters. With this throw, she sealed her berth for the upcoming Athletics World Championships in 2017. Annu also became the first Indian woman to qualify for a World Championships and has broken five national records in the past three years.

The 24-year-old girl from Bahadurpur, Meerut has been steadily increasing her distance and confidence. While she serves as an inspiration for many girls in villages, she also inspires women athletes who want to make it big at the International stage. From Bahadurpur to Incheon and now to London, Annu Rani is making her family, her coach, her village, and the whole country proud.

#AnnuRani has qualified for #Tokyo2020 in women’s javelin throw through her world ranking (18th). Many congratulations to her.#Cheer4India #TokyoOlympics pic.twitter.com/uGxVCxw4vn

National record holder in the Women’s #Javelin Throw #AnnuRani has secured her #Olympics ticket through #WorldRankings. Annu had failed in her final bid to breach the #Olympicsqualification mark with an effort of 62.83m. The Olympics mark was 64m.@Media_SAI @IndianJavelin #tokyo pic.twitter.com/RvUP5HTvGo

nikhil
Nikhil is a man of many words. A reader and a writer, he'll read just about anything to satiate the urge. His journey into the literary world started as a young journalist who worked for The Times of India during his school days. Now, you'll usually find him in the corner of a room; engrossed in a book, typing furiously or simply daydreaming at the best.
Previous articleJankidas Mehra Profile | Story of India’s First Olympic Cyclist- KreedOn
Next articleBest Debuts of Indian Cricketers

Top 17 Sports Books on Indian Women That Will Inspire You