Champions are not just made of talent. They are made of persistence, grit, and determination as well. Our athletes have never failed to amaze us with their indomitable spirit. Every athlete’s story inspires us in a different way. We see them conquer their opponents and enjoy their moment in the spotlight, but what about the years of hard work and sweat? What about the numerous sacrifices? The real stories begin years before we even realize it. Today, we explore the story of the current Indian number one in women’s singles tennis – Ankita Raina. 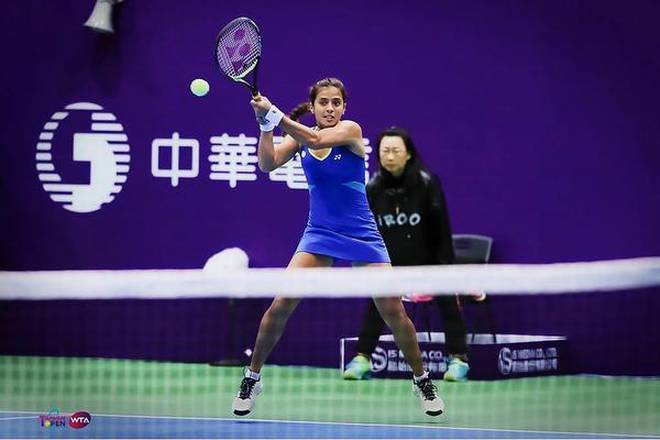 Ankita Raina was born and brought up in Ahmedabad, Gujarat, she picked up tennis as a kid. Her excellence in the sport was prominent as she went on to win numerous tournaments even before she was a teenager. An extremely independent and determined girl, Ankita crossed one milestone after another to reach the career-high ranking of 181 on May 21, 2018.

Ankita Raina is blessed with a supportive family. She was born in Ahmedabad in a Kashmiri Pandit family. She started playing tennis at the tender age of five. Ankita’s mother, table tennis and athletics player herself used to take her elder son Ankur to play tennis. Ankita started accompanying them and picked up the sport herself. Not only did she start playing it, but also excelled in it.

She first displayed her immense talent when she was just eight. In the Future Kids competition, she beat a 14-year-old. Her family realized how special she is and encouraged her to pursue a career in tennis.

“When she was only 12, due to some problem, she had to carry her own kit through Pune after her training session. She was tired and had to travel in two buses with the heavy kit, but she did it. So we knew that if she has to do something, she is determined enough to do it alone,” her brother Ankur told Scroll.

Her family realized that Ankita could improve her game with proper training. Hence, Ankita moved to Pune in 2007. She started living with her mother’s side of the family. In Pune, he trained at the PYC Gymkhana under Hemant Bendre.

“What was special about Ankita was that even as a young tee,n the motivation, and will to play was entirely hers. She didn’t, like most others of her age, have a pushy parent behind her. And that showed in her dedication. She was willing to train as long as you’d ask her to and work as hard as you’d wanted her to and often even more. It made it very easy for me to coach her. Her only wish was to play a Grand Slam someday. Every day she would tirelessly ask me when it would happen. Every year she would work towards just that one goal, of qualifying for a Grand Slam, and every year she would fall short. But she never gave up. I’m so happy that finally, she’s going to live her biggest dream,” her coach told ESPN.

Her mother, who works for Life Insurance Corporation, tried to transfer to Pune but got Lonavala instead. However, for years she traveled daily to support her daughter.

India's no.1 Ankita Raina has made it to the #Wimbledon Qualifiers and 2nd Grand Slam in 2018 after #FrenchOpen . Congratulations and all the best 👍👍 @ankita_champ Keep the flag flying high 👏🇮🇳 #Tennis pic.twitter.com/kPydHkF1Tt

Ankita Raina is slowly and steadily climbing the ITF circuit. The real journey began for her in Australia. The year was 2007 and she had participated in the Under-14 Asian Tennis series. After qualifying in the first round, she went to Australia. Though she was the runner-up in the finals, the competition gave her a lot of confidence.

In 2009, Ankita Raina won the National grass-court championship organized in Kolkatta. She reached three ITF circuit finals in the year 2011 in the doubles event. She even won one with Aishwarya Agrawal. The year 2012 brought her, her first singles professional singles title.

Unfortunately, Ankita Raina lost to Russia’s Evgeniya Rodina 6-3, 7-6(2) in the first round and couldn’t qualify for the French Open. Even her Grand Slam hopes were smashed with a heartbreaking defeat to Russian world number one, Vitalio Diatchenko.

The year 2018 started on a good note for Ankita as she breached into the top-200 WTA singles ranking. She is only the 5th Indian woman to do so. She has seven titles in singles in the professional circuit and has finally found a much-needed breakthrough. 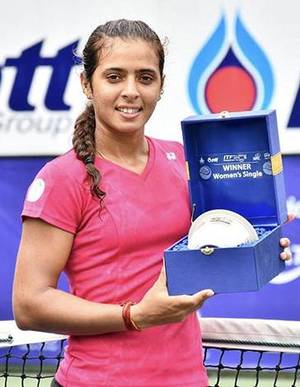 Coming from a middle-class family, Ankita Raina had to face a lot of financial constraints. It was not possible for her family members to accompany her to tournaments due to financial constraints. Since she was just 12- 13 years old, she traveled alone. Imagine a 13 year old carrying her heavy kit and going to unknown places alone. Plus, she hardly knew anyone there, so she never had anyone to share her wins or defeats.

The Government of Gujarat has sponsored some of her expenses. Through its Shaktidoot scheme, the government is assisting upcoming athletes.

Getting a step closer to my goal for Olympics, with the win in Thailand. Heartfelt gratitude to honourable PM Sir @narendramodi @Ra_THORe @sportsgujarat @IndiaSports for supporting athletes through schemes like Shaktidhoot and TOPS. #SportsRisingInIndia pic.twitter.com/46OibvPc3r

However, Ankita Raina was not included in the Sports Ministry’s Target Olympic Podium Scheme initially. Her family had to work really hard to provide her with all the necessary resources. Businessman JR Vyas helped her in this period. She was also given a job by ONGC in 2013.

Finally, in 2018 the Sports Authority of India included her in the TOPS scheme. Her excellent form in the Fed Cup and the professional circuit propelled this decision.

And here is the 8th athlete who has been added to the TOPS pool.
Wishing you all the best for your future endeavours, Ankita!
Hope you continue making the nation proud.
Many congratulations @ankita_champ ! #TOPSAthlete #SAI pic.twitter.com/LGVxiLdiZA

Being included in the Target Olympic Podium Scheme has been a big boost for Ankita Raina. It has helped her focus more on her game. In the last few years, she has understood her game a lot better. Currently, she is working on improving her serve accuracy.

“I think it is the fitness and the mental part. Both get complex as you go higher, and you have to go into tiny details. The stronger one can get physically and mentally, the easier it’ll be to pull out matches at the highest level. Because everyone out there is fighting, one just needs to hang in there longer. The sport is very much mind-oriented at the top level. I’ve been preparing for the Asian Games since last year, so that has been the goal ever since. Of course, the goal is also to play the rest of the Slams,” she told DNA.

It is very clear that Ankita Raina is persistent. She found her dream and is giving her very best to fulfill it. From traveling alone as a little girl to fighting it out on the court as a young woman, it has been quite a journey. The Indian number one in tennis singles has shown a lot of patience when her rankings failed to budge. And when they did, she made the most of the opportunity.

We cannot wait to see her at the podium in the Asian Games. An Asiad gold medal will be the perfect addition to her stellar display!

READ |Top 10 : Famous Table Tennis Players in India you might not know

"It was nice of @MirzaSania to invite me to stay with her this week. There will be lot of conversations and insight of how to prepare for big events." – @Ankita_Champ to @deeps_30

Mamta Thatte
A passionate foodie, a versatile writer, and now a sports enthusiast, Mamta is always open to exploring new avenues. She has a vast experience in Web Content Writing, Editing, and Social Media Management. A self-confessed coffee and dark chocolate addict, she believes in following her heart and giving her 100% into everything she does.
Previous article
Asian Games Sports: The first time events at the 2018 Games
Next article
Top 10 glorious moments of India at Asian Games you did not know

Arunima Sinha Biography: An Inspiring Tale of a Girl who Conquered...