She broke numerous barriers and rose like a star. Her aura is truly bright, and her spirit is unbreakable. Cricket has always been a male-dominated game. Today, our women cricketers are slowly and steadily breaking that perception. But there was one female, who truly started this tradition. From her limitless talent in the field to her confidence outside, she has always been an inspiration to Indian women. We are talking about none other than Indian cricketer, commentator, author, motivational speaker, and a businesswoman – Anjum Chopra!

Anjum has always been an all-around sportswoman. She started playing cricket at a very early age. She was also a part of the Delhi State basketball team and represented her school, as well as college in swimming, athletics, and basketball. Perhaps the main inclination for this was her family background. Almost every member of Anjum’s family has actively been associated with sports. No doubt where her inclination towards sports comes from! Her cricketing journey started at her school, where she played at the state level.

After Anjum Chopra started working for Air India, she represented them for domestic matches. She led the Delhi team in the National Championship 2012. Under her leadership, the women’s team won its first national cricket championship. Air India team also won 2002 and 2003 national and zonal tournaments. In 2003, the Air India team was declared the “Best Team of the Year.”

Anjum’s international career began at the age of 17. She made her debut against New Zealand in 1995. In 1999, she made a century during India’s tour of England. Anjum soon became one of the best Indian batswomen. She was also a talented medium-pace bowler. Her swiftness in the field made her a superb fielder as well. No wonder then that soon she began a premier Indian cricketer.

By the year 2000, she had become the Vice-Captain of the Indian team. At the Cricket World Cup in New Zealand, she was the highest Indian scorer. She won the player of the match award twice.

In the year in 2002, she became the captain of the Indian women’s team. Under her leadership, the team went on to win numerous accolades. Visiting England team was royally sent back with a whitewash, in spite of 7 debutants in the team. India won the test match series in South Africa in ’02. She guided the team to the World Cup finals in 2005. She served her country in international cricket for 4 more years. Chopra hanged her boots in 2009.

Anjum brought a lot of fame and recognition to the Indian women’s cricket team. Her leadership skills were appreciated by her teammates. Even after retirement from cricket, she has continued her involvement in the field. She also continuously supported various initiatives taken to promote women’s cricket.

Anjum will always be remembered as an all rounder who could bat at any required position. She was known for the quick ones and twos and eventually made a lot of difference to the match. Her stance on the field has been described as lazy elegance by many. However, she was one of the fittest members of the team and super swift in the field. She has opened up for her team numerous times and performed even better under pressure.

Anjum made her international debut at the age of 17 and went on to have a super successful cricketing career. She played in 12 Tests, 127 ODIs, and 18 T20s. Anjum aggregated 548 runs in Tests and 2,856 runs in ODIs.

Anjum Chopra married a Delhi-based IAS officer and began another exciting phase of her life.

The second innings of Anjum’s career have been equally exciting. Armed with her MBA, Anjum has established herself as a corporate and motivational speaker. She has conducted training sessions at numerous organizations such as Vodafone, Goldman Sachs, etc. 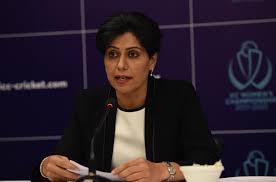 Anjum Chopra’s father, Krishnan Bal Chopra is a golfer, and her mother, Poonam Chopra has participated in and won car rallies. Even her maternal grandfather, Ved Prakash Sahni represented the country in athletics. Anjum’s brother, Nirvan Chopra is also a former state-level cricketer. Her maternal uncle, Rohit Sahni played cricket in school and college. In fact, he was the captain of his college team. Phew, truly a sporting family, isn’t it?!

She started training at the Sonnet Club under the guidance of Tarak Sinha. He played a huge role in shaping Anjum’s career. Anjum has remembered her coaches in numerous interviews. She was quoted by the Hindu, “I learnt to be disciplined, competitive and grounded in behavior at the Sonnet Club. On such moments I remember my cricket guru and all my coaches.”

READ | Meet the Top 30 Most Beautiful and gorgeous Cricketers’ Wives

A pleasant surprise!!! After a good days work; got to meet the talented @paponmusic. A #fangirl moment😊 pic.twitter.com/NLjWtOjahM

Finally made it! 🛬.Just in time to complete my national duty. #GotInked #GoVote #Elections2019 pic.twitter.com/J0CjnNoTkM

It’s always nice to catch up with this champion 🌟 @imharmanpreet_kaur @iplt20 #WIPL pic.twitter.com/71R00Hu4Ke

Mamta Thatte
A passionate foodie, a versatile writer, and now a sports enthusiast, Mamta is always open to exploring new avenues. She has a vast experience in Web Content Writing, Editing, and Social Media Management. A self-confessed coffee and dark chocolate addict, she believes in following her heart and giving her 100% into everything she does.
Previous article
“Thank You for Making Me What I am Today” Athletes Pay Tribute to their Gurus
Next article
Sports Minister Confers on Smriti Mandhana with National Honour