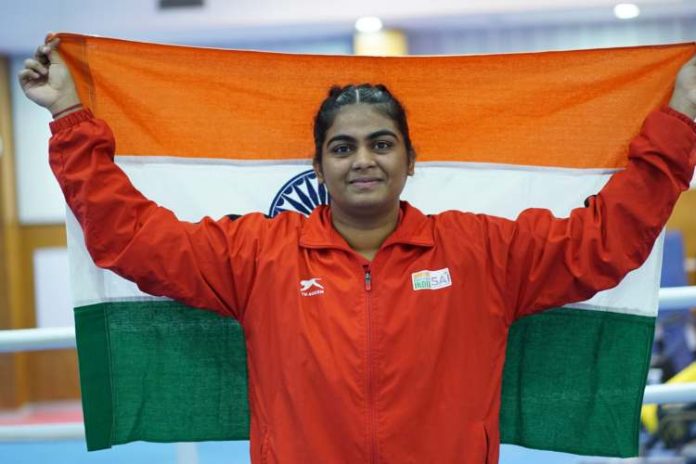 Alfiya Khan Pathan is the first-ever female boxer from Maharashtra to have won a medal in an international competition at the senior level. She won the gold medal in the 81 Plus category at the ASBC Asian Boxing Championship very recently, in November. The 19-year-old boxer who resides in Nagpur is called the most fearsome boxer as in the Asian Elite Boxing Championship final her opposition from Jordan became clueless within the first two minutes and in a bid to stop the shower of Alfiya’s relentless powerful punches, the Jordan boxer, Husaili was somehow compelled to bite on Alfiya’s shoulder and was immediately disqualified. Alfiya had also won a gold medal at the senior level at the Elorda Cup invitation championship in Kazakhstan.

The Beginning of Alfiya Khan

Alfiya used to play badminton in her childhood. Her father is an Assistant Sub-Inspector of Police in Nagpur. Saqib, one of her two elder brothers is also a serious boxer and his persuasion inspired Alfiya to start boxing in Nagpur under the tutelage of an experienced and qualified coach from NIS, Ganesh Purohit. She was 13 years old at that time.

The Criticism from Society

Alfiya’s family members had to face disdain from their society, especially from the relatives and neighbors of their Muslim community for encouraging Alfiya in boxing. The boxer said,

“I was not much affected because my father had put up with all the hazards, the mockery, and criticism on his shoulder. Additionally, one of the key reasons behind criticisms was wearing shorts while boxing. But I have always worn pants while boxing. I never felt uncomfortable while fighting with pants.”

The Change of Scenario and Alfiya Khan’s Delight

Today, after Alfiya’s success the scenario has changed. Nagpur now looks proud of its girl and the most significant feature is that many more girls from Alfiya’s community are joining Ganesh Purohit’s training center to learn boxing. Alfiya described,

“I am truly elated to have noticed that a lot of young girls from our community are training under Purohit sir and those who were highly critical about my boxing, have been sending their daughters or sisters to learn boxing. All have been inspired by my success. I feel I must earn more success in the international arena only for them.”

Alfiya is tremendously aggressive in the ring. Once in the state-level competition, her opposition gave Alfiya a bye already before the bout in the final out of fear. Alfiya has an informal record of finishing three bouts in a row from quarterfinal to final within one minute in a national-level competition.

Alfiya who has idolized Mary Kom also watches the videos of all great boxers and her attitude and ferociousness have a similarity to the legendary boxer Mike Tyson’s style and aggressiveness. While discussing the issue, Alfiya smiled and revealed,

“I often watch the videos of Mike Tyson’s matches and some training videos also. I am simply moved by his upper cuts which are impeccable.”

Missing the Flight to Tokyo by a whisker, Sakshi Chaudhary sets eyes on Paris now

Almas Kabir, the New Kid on the Block from Bengal

Trisha Deb awaits the return of her coach for a comeback...

Missing the Flight to Tokyo by a whisker, Sakshi Chaudhary sets...