In the last few years, the popularity of kabaddi in India has risen phenomenally. It isn’t surprising though. The game has all the ingredients to make it a perfect entertainer. When we think of kabaddi, the first name that pops into the head is that of our rugged captain – Ajay Thakur. Aptly called as the best Indian raider and Flying Thakur, Ajay has time and again led the national team to glory. His contribution in his respective Pro-Kabaddi League teams is also phenomenal.

What inspired Ajay to take up kabaddi? Which is his favourite style of attacking? These and many more questions will be answered as we take a sneak-peek into the life story of Ajay Thakur.

Born and brought up in Dabhota village in Himachal Pradesh, Ajay knew his calling was in sports since a young age.

Coming from a sports family, Ajay got the right support and encouragement from the beginning of his career. Initially, Ajay’s father wanted him to study and choose a more secure profession. However, Ajay was never inclined towards that, so he decided to support his son wholeheartedly. 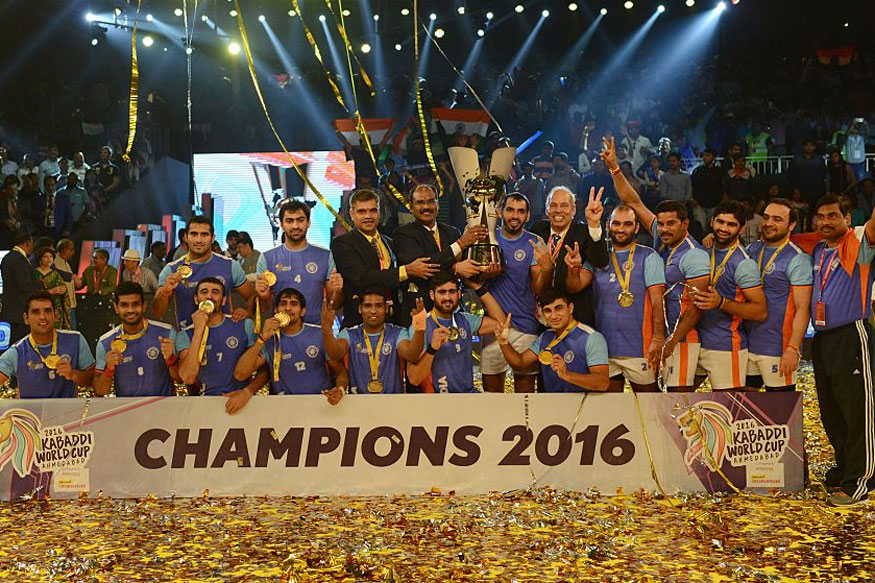 The World Cup-winning kabaddi team! This victory is one of the most special ones for Ajay.
(Source: News18)

It was at the Asian Indoor Games of 2007 that Ajay won his first international medal. Since then, there has been no one to stop him.

With every tournament, he has proved not only his skills in kabaddi but also leadership skills as a captain. He has led the Indian National Team to glory on multiple occasions. The game has become extremely popular in recent years – all due to players like Ajay Thakur, and this surely is a welcome change. Ajay won another gold at the Asian Indoor Games 2013.

India’s victory at the Asian Games 2014, asserted our dominance in the game. Ajay played a crucial role in the tournament.

Ajay Thakur was definitely the star of the 2016 world cup victory. He captured the imagination of the entire nation by scoring a Super 10 in the final against Iran. He believes in leading through his example.

In an exclusive interview after the world cup win, Ajay Thakur told News18, “My coach used to tell us, keep your spirit high and play with all honesty. Kabaddi and the players will get the recognition one day. Now we feel so proud to be part of the world cup winning team and thankful to the nation who showed their love, emotion and so much support to us. I would like to thank the Prime Minister, the Sports Minister and all the stars for congratulating us and following the game.”

At the Kabaddi Masters in Dubai and Asian Kabbadi Championships, India won the tournament titles without losing a single game. Ajay showed immense class and talent in every game.

Unfortunately, the 2018 Asian Games turned out to be a huge disappointment for Ajay and the team. The team entered the games as the favourites. However, they suffered a heartbreaking defeat against Iran and had to come home with a bronze. The defeat turned out to be even more painful, as Ajay got injured during the game. In an interview with IANS, he shared his thoughts on the tournament.

“Losing at the Asian Games was the worst moment of my career as it was under my captaincy. Kabaddi has completely been an Indian game and if such mishappenings take place, it hurts. But today, this game (kabaddi) is not just confined to India. So many countries are playing it and that too, very well. So, now it is not so easy to go and get a medal. The quality of competition is getting better day by day. The game has expanded and today the whole world watches it, as it carries name and fame like other games. No doubt, we feel bad for the loss, but it is good for the growth of the game,” Ajay expressed. 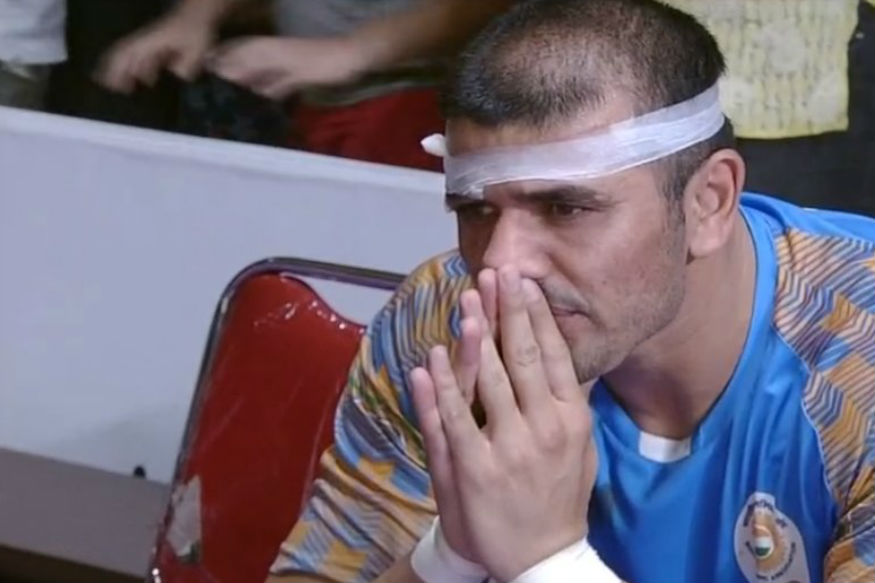 An injured and disappointed Ajay Thakur at the Asian Games 2018 (Source: News18)

The team faced some technical challenges in the game. The mat was not very suitable for raiding. Raiding is Indian team’s biggest strength and Ajay himself is an aggressive raider.

Victories and defeats are a part and parcel of any sport. The most important part is how you analyze your defeats and come back stronger. 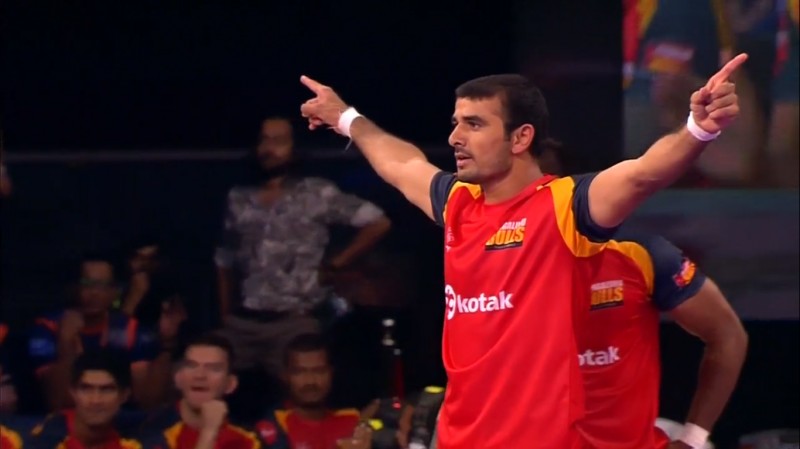 Ajay Thakur is one of the top scorers in the Pro Kabaddi League as well. In the first two editions, he played for Bengaluru Bulls. In the third year, he was purchased by the franchise, Puneri Paltan. The team reached the last four stage in both editions. In the fifth season, Ajay was bought by the Tamil Thalaivas. He is known as Flying Thakur due to his dangerous raiding style. Ajay is definitely one of the most feared kabaddi players!

Though Pro Kabaddi exposed the techniques of Indian players to foreign players, Ajay doesn’t consider this a drawback. The league has brought kabaddi in the limelight. Today, we can see fans discussing teams, players, and techniques. This level of excitement was only seen for cricket and IPL till a few years back.

This shows Ajay’s commitment and dedication towards the game. He believes in looking at the bigger picture rather than thinking about defeats an shortcomings. He has time and again asserted that PKL is very important for the growth of kabaddi. 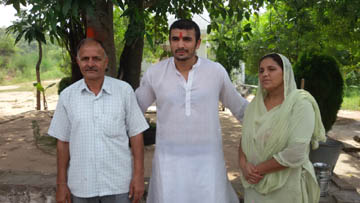 Ajay’s father, Chotu Ram, worked in police and is a former wrestler and coach, himself. His mother Rajinder Kaur is a homemaker. The mountainous terrains of Himachal made Ajay strong and sturdy. His stamina also increased by training there. His cousin Rakesh was a part of the national kabaddi team. Seeing Rakesh represent the country, Ajay was tremendously inspired. He decided to pursue a career in kabaddi as well.

In season one of the Pro Kabaddi League, Ajay was signed by Bengaluru Bulls for INR 12.20 lakhs. He is one of the highest earning kabaddi players in India. His approximate yearly earnings are 100.5 lakhs. This amount includes his salary and tournament rewards.

Ajay believes that hard work is the real key to success. We couldn’t agree more!

For more such inspiring stories on Indian Sports, keep following our social channels and subscribe to our newsletter.

Mamta Thatte
A passionate foodie, a versatile writer, and now a sports enthusiast, Mamta is always open to exploring new avenues. She has a vast experience in Web Content Writing, Editing, and Social Media Management. A self-confessed coffee and dark chocolate addict, she believes in following her heart and giving her 100% into everything she does.
Previous articleLakshya Sen Biography : Story of India’s Rising Badminton Prodigy
Next articleReal Kashmir Football Club – A Ray of Hope in a Lost Cause

Patna Pirates Take on Tamil Thalaivas in The 2018 PKL Season...

Kabaddi Games – A journey from the past